The Challenges of Libya's Post-Qadhafi Transition 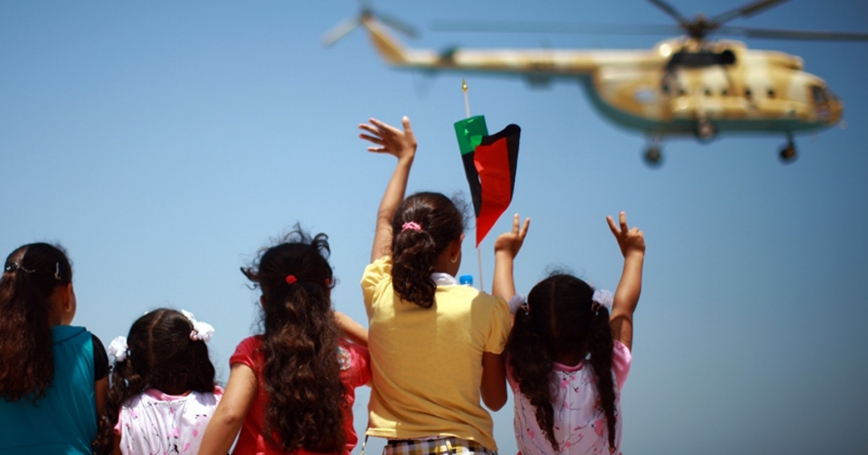 Girls in Zawiya, Libya flashing victory signs during a military parade held to mark the anniversary of the uprising

A year ago this week, the Libyan people watched as Muammar Qadhafi, their dictator of 42 years, was captured and killed in gory, televised fashion. With his death, a seven-month NATO intervention came to an end and a door opened to a better future for the Libyan people.

Libya had considerable advantages compared with other post-conflict states. It was wealthy. The region was relatively stable. And the rebel victory was uncontested. The Libyans were reluctant to accept any significant role for the international actors who had helped them topple Qadhafi. After a seven-month conflict that strained the alliance, the NATO allies were themselves reluctant to take on any additional burdens.

A year after Qadhafi's death, however, the light-footprint model adopted by the international community in Libya is now facing its most serious test. While the approach made sense in the immediate aftermath of the war, as leaders look ahead it will be important not to overlearn the lessons of Afghanistan and Iraq. Libya should remain in charge of its own post-conflict path, but it needs the help of external actors to succeed with its transition.

Expectations were high from the start. The July 2012 election was successful. But there has been little progress in other key areas. The tragic attack on the U.S. diplomatic facility in Benghazi on Sept. 11, 2012 only underlined the fragility of the security situation and the need for sustained attention.

Indeed, security in Libya requires immediate attention and could still get worse if mishandled. The Libyan state needs to establish a monopoly on the legitimate use of force within its own territory if it is to become truly sovereign. Unless the country's militias are brought under the control of the state, progress on other fronts will be very difficult to achieve.

Libya's transitional government and the international actors that supported it deserve credit for the successful elections in July. However, the political and economic challenges ahead are still significant. Historically, post-conflict transitions have taken several years, and Libya will be no different.

NATO's role in liberating Libya was crucial. Now, despite reservations in Tripoli and Brussels, a greater role for the alliance in Libya is worth serious consideration. NATO could, for example, assist with training Libyan security officials and forces, and provide technical assistance to security-sector reform. If handled effectively, closer partnership with NATO would help strengthen, rather than weaken, the new Libyan state. An international conference focused on coordinating assistance to Libya should also be considered.

Economically, Libya needs to rethink how it will manage its economy and take greater advantage of its plentiful energy resources to maximize the benefit to its citizens. Libya's energy resources have provided a relatively high standard of living—per-capita income of just over $12,000 in 2010—but it can enjoy even more the promise of a bright future and financial grounds for building a new state. Successful transition in Libya will ultimately require the growth of private enterprise outside the hydrocarbon industry.

Our research is not intended to be taken as a blueprint for Libya's future. Instead, it is a guide to bring into focus key issues and help set realistic expectations. Post-conflict situations are historically very fragile and all too often return to war. Despite recent violence, with carefully measured stops, Libya's future can still be bright.

Christopher S. Chivvis is a senior political scientist at the nonprofit, nonpartisan RAND Corporation and the author of a forthcoming study on NATO's intervention in Libya.

This commentary originally appeared on U.S. News & World Report on October 25, 2012. Commentary gives RAND researchers a platform to convey insights based on their professional expertise and often on their peer-reviewed research and analysis.