Will Iran Close the Strait of Hormuz? 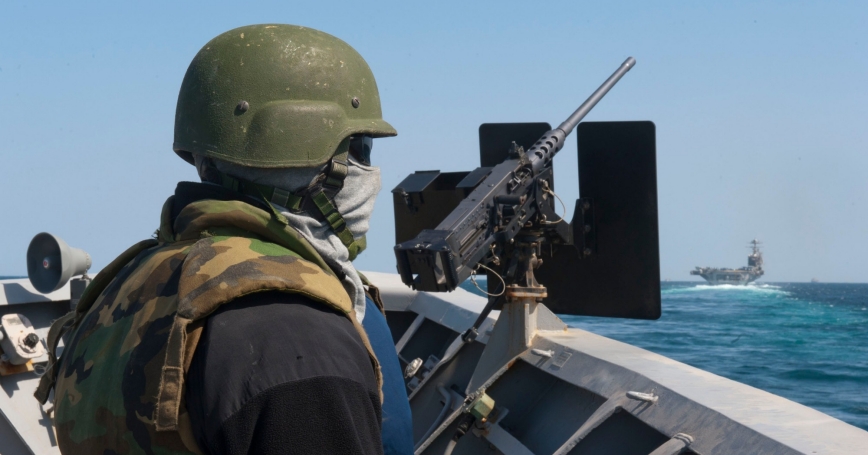 Iran's repeated threats to close the Strait of Hormuz are a pivotal part of a military strategy based on psychological and asymmetric warfare. Blocking the strategic waterway, through which 90 percent of Persian Gulf oil flows to the outside world, would have sweeping implications for regional security and global oil markets. It may be the Islamic Republic's most potent weapon. Tehran has also hinted it would retaliate against U.S. forces, notably the Fifth Fleet based in the Persian Gulf, if it is attacked.

Since the 1979 revolution, Iran has developed sufficient military capabilities to back up its threats. The Revolutionary Guards Navy may be able to inflict damage on U.S. forces. It operates hundreds of small and relatively fast attack boats, some armed with sophisticated anti-ship cruise missiles. Its fleet could attempt to swarm larger U.S. ships and try to penetrate their defenses, even if they could not destroy the more powerful American vessels. Iran could also fire missiles at U.S. warships from its 1000 mile-long Gulf coastline. An even more controversial Iranian move would be scattering mines either near the Strait or in the Persian Gulf, which could slow or stop shipping as the U.S. Navy tried to clear the waterway.

Iran's naval forces cannot permanently hold or close the Strait, however. The United States would be able to neutralize Iran's military assets, given its overwhelming firepower. And Iran's conventional navy would not be able to reinforce the Revolutionary Guards, since its antiquated frigates and corvettes, most dating from the Shah's time, would be sitting ducks for U.S. fighters. Iran's three Russian-supplied Kilo submarines could also be quickly detected and sunk.

Iran might instead seek to repeat the strategy used by Hezbollah in the 2006 war with Israel—holding ground by bleeding the adversary. It may hope to emerge as the political and psychological victor by hitting a few U.S. warships, perhaps even a carrier, causing high oil prices, and increasing international pressure—all tactics designed to force the United States to stop its strikes.

Impeding shipping in the narrow Strait would give Iran much-needed leverage since it cannot technically win a military confrontation against the United States. Just by threatening to close the Strait, Iran increases pressure on the United States to restrain Israel from attacking Iran. Other key players—including major oil importers such as China, Japan, and India—would be reluctant to support military action because of heavy dependence on Persian Gulf oil. Closing off the Gulf sealanes would also limit the flow from Saudi Arabia and the neighboring oil-rich sheikhdoms, which Iran may calculate gives it a psychological edge.

But the Islamic Republic would also pay a heavy price for fighting in the Persian Gulf. Its forces could be destroyed without first inflicting substantial damage, which would humiliate the regime. Despite military rhetoric, Iran's naval forces are poorly matched against the U.S. Fifth fleet.

Iran is also heavily dependent on freedom of navigation through the Persian Gulf to export its own oil, especially important given its increasingly troubled economy. Most Iranian exports and imports flow through the Strait. Iran may be more dependent on the Strait than other regional players, such as Saudi Arabia or the United Arab Emirates, both of which are building pipelines to bypass the strategic waterway.

Despite repeated warnings, the regime's intentions and capabilities remain unclear. Its threats in the Strait may instead be part of a long-term strategy to buy time, to forestall a military conflict while working on its nuclear program. In the meantime, Iranian posturing in the Persian Gulf is a powerful form of deterrence against Israeli or U.S. strikes.

Alireza Nader, coauthor of “Israel and Iran: A Dangerous Rivalry” (RAND 2011), is a senior policy analyst at the nonprofit, nonpartisan RAND Corporation.

This commentary originally appeared on The Iran Primer, USIP on October 2, 2012. Commentary gives RAND researchers a platform to convey insights based on their professional expertise and often on their peer-reviewed research and analysis.