Would Iran Turn to Terror? 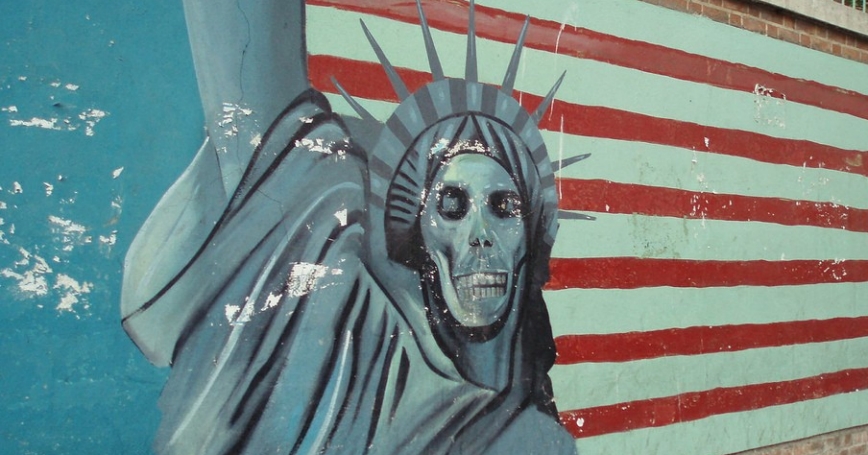 Mural of Statue of Liberty with a skull face, former U.S. Embassy, Tehran

In a conflict with the United States or Israel, Tehran could turn to terror tactics—directly or indirectly through proxies—to create leverage when it is significantly outmanned and outgunned against conventional military forces. The Islamic Republic has sporadically used terrorism as a weapon against both countries in the past.

The Islamic Republic appears to justify extremist tactics to counter Western military superiority. Iran was not able, for example, to confront the United States after U.S. Marines deployed in Lebanon in the early 1980s. So it reportedly aided and abetted terrorist attacks that produced mass casualties—including 241 Marines in a 1983 attack—and in turn forced the U.S. withdrawal from Lebanon.

The last major Iranian-sponsored terrorist attack against the United States was the 1996 attack on Khobar Towers in Saudi Arabia, which killed 19 Americans and wounded more than 370 of many nationalities. The facility housed American military personnel. The Islamic Republic, however, has usually been careful to maintain plausible deniability by using proxies, such as Iraqi Shiite militias in carrying out attacks on American targets.

Tensions between Iran and Israel have played out mainly through Hezbollah, Palestinian Islamic Jihad and Hamas. But Tehran has also been tied to direct attacks against Israeli and Jewish targets outside Israel. The last major attacks on Israeli facilities abroad were the 1992 bombing of the Israeli embassy and the 1994 bombing of the Argentine Israelite Mutual Association in Buenos Aires. Iran then largely restricted its sponsorship of terrorism to targets within Israel for roughly eight years. But since mid-2012, Tehran and its proxies have been linked to attacks on Israelis in Bulgaria, India, Thailand, Georgia and Kenya.

For Washington, the looming question is whether the Islamic Republic would employ extremist tactics inside the United States after a U.S. or Israeli air strike on Iran. The regime's agents were linked to attacks on Iranian dissidents on American soil, particularly soon after the 1979 revolution. But Tehran limited its activities inside the United States until an alleged plot against the Saudi ambassador in Washington D.C. in 2011. U.S. officials have attempted to determine if the assassination plot, uncovered in an early stage, signaled a change in Iranian doctrine and intentions.

Three factors may have contributed to more ambitious projects: Hardliners, many of whom are veterans of the Revolutionary Guards, have steadily cemented their hold on policy since President Ahmadinejad's election in 2005. Tehran blames the United States and/or Israel for the assassination of five Iranian scientists and cyber-attacks, such as the Stuxnet virus, on Iran's nuclear facilities. Tensions have also increased over Iran's nuclear program, especially as sanctions have taken a deeper bite out of the economy.

The Islamic Republic increasingly believes it is in an existential conflict with the United States, Israel and Saudi Arabia. Supreme Leader Ayatollah Ali Khamenei vowed that an attack on Iran would lead to retaliation world-wide. The regime would meet “pressure with pressure,” he said. Revolutionary Guards officers have also threatened to strike the U.S. homeland if Iran is attacked. So an Iranian strategy that included targets inside the United States would not be a surprise.

Alireza Nader, coauthor of “Israel and Iran: A Dangerous Rivalry” (RAND 2011), is a senior policy analyst at the nonprofit, nonpartisan RAND Corporation.

This commentary originally appeared on The Iran Primer, USIP on October 2, 2012. Commentary gives RAND researchers a platform to convey insights based on their professional expertise and often on their peer-reviewed research and analysis.