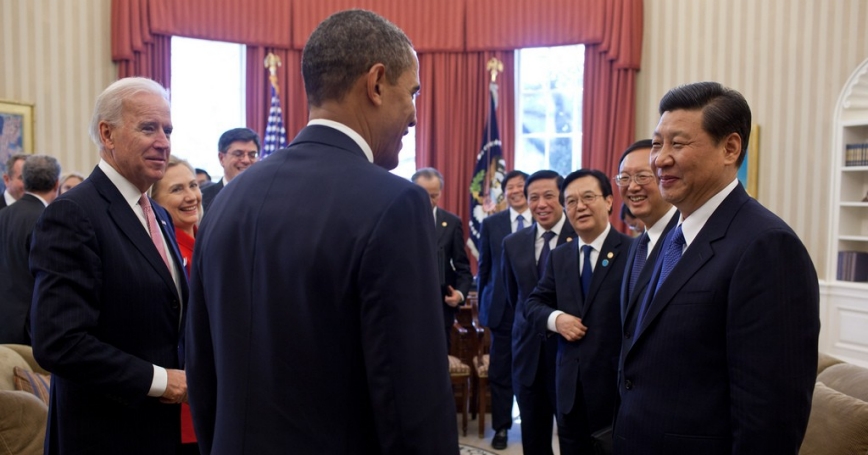 Pres. Barack Obama talks with Xi Jinping of the People’s Republic of China on Feb. 14, 2012

Xi Jinping, China's newly anointed president, made his first visit to the United States in May 1980. He was a 27-year-old junior officer accompanying Geng Biao, then a vice premier and China's leading military official. Geng had been my host the previous January, when I was the first US defense secretary to visit China, acting as an interlocutor for President Jimmy Carter's administration.

Americans had little reason to notice Xi back then, but his superiors clearly saw his potential. In the ensuing 32 years, Xi's stature rose, along with China's economic and military strength. His cohort's ascent to the summit of power marks the retirement of the last generation of leaders designated by Deng Xiaoping (though they retain influence).

Despite China's greater weight in world affairs, Xi faces internal strains that make China more fragile than is generally understood. China's export-led economic model has reached its limits, and the transition to domestic-led growth is intensifying internal frictions. Managing unrest through repression is more difficult than in the past, as rapid urbanization, economic reform, and social change roils a country of 1.3 billion people. Ethnic conflicts in outlying regions will also test Xi's political control.

China's foreign policy is another cause for concern—especially for the US. History teaches us that rising powers inevitably compete with status quo leading powers, and that this conflict often leads to war.

For now, the large bilateral trade imbalance has exacerbated US-China tensions, and can be safely reduced only by changes in behavior on both sides—or, unsafely, though a dangerous crisis-driven correction.

More immediately, China's territorial claims—particularly in the South China Sea, but also regarding its border with India—and its efforts to expand its influence over neighboring countries will force the US to navigate two overarching risks. The first is confrontation, which could occur directly or as a result of the US being drawn into conflicts between China and its neighbors.

The other risk is that Japan, South Korea, Vietnam, the Philippines, Thailand, or Myanmar could fall into China's strategic orbit. Many of these countries will look to the US as a strategic counterweight should China seek to assert local dominance. But some may conclude that it is safer to steer closer to China than away from it, because their economies depend so strongly on Chinese trade.

As recent events in the East and South China Seas show, China sometimes attempts to strong-arm its neighbors. The US will need to defend its allies and interests by pushing back, but with actions modulated to limit Chinese concerns.

One way to do this is to understand China's motives. China's drive for economic and political leadership in East Asia, and its increased military capability there, is inevitable. But the world can be confident that the US will remain stronger, wealthier, and more influential in global affairs than China even in 2030. That argues against American overreaction, which could fuel the kind of self-reinforcing downward spiral in bilateral relations that occurred between Great Britain and Germany prior to the conflagrations of the first half of the twentieth century.

Perhaps the best way to avoid confrontation is to cooperate on shared external threats, most notably nuclear proliferation, global climate change, and Islamic extremism. But getting to 2030 without a major confrontation will be a major achievement. While the US is likely to maintain the upper hand in terms of military power for at least another 15-20 years, asymmetric warfare could undercut America's advantage should China engage in cyber-attacks on US electronic and satellite systems, along with attacks on infrastructure.

In response to China's capability to project power many hundreds of miles from its borders, the US (as I have suggested for the last 25 years) should develop a long-range bomber capable of penetrating sophisticated defenses and delivering great force. As US security interests shift to the Pacific, Americans now rely on increasingly vulnerable forward land bases and carrier fleets with tactical aircraft that have a combat radius of 300-500 miles (482-805 kilometers). But a long-range bomber would be more cost-effective than standoff bombers with cruise missiles, and, unlike shorter-range tactical bombers, its bases would be invulnerable to attack.

That said, America's most serious challenge right now is to get the US economy and its governance in order. I believe that it can do that. But, unless and until it does, thereby giving President Barack Obama a firm basis from which to engage Xi on issues requiring international statesmanship, the prospect of trouble between the US and China will continue to grow.

Harold Brown was US Secretary of Defense under President Jimmy Carter and is a member of the Defense Policy Board, which advises current Secretary of Defense Leon Panetta. He is an emeritus trustee of the Rand Corporation and the author with Joyce Winslow of Star Spangled Security, Lessons Learned Over Six Decades Safeguarding America.