Obama and Myanmar (Burma): Four Points About Conflict There 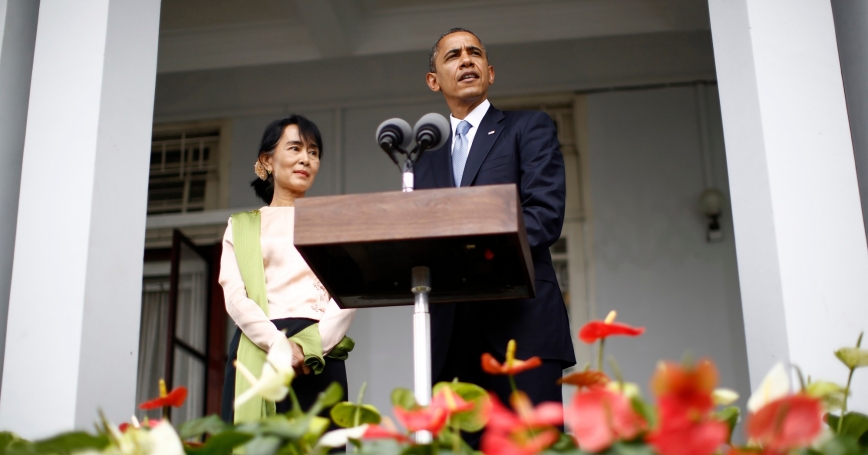 A long-simmering ethnic conflict in Myanmar (Burma) recently broke into American newspapers: At least 89 people have been killed and more than 35,000 displaced in what is being described (not entirely accurately) as Buddhist-Muslim violence. With President Obama as the first US head of state to visit this country, there are four points to bear in mind about this detour from Myanmar's road to a more open society:

President Thein Sein deserves a great deal of credit for starting to bring the nation of Myanmar (Burma) out of its self-imposed half-century of isolation. A former top general and prime minister for the military junta that has ruled the country since 1962, Mr. Thein Sein is trying to preserve much of the old order rather than overthrow it. He is often referred to as "Burma's Gorbachev"—and it is quite possible that (like the last Soviet leader) he will usher in changes that will eventually take on a life of their own.

The United States and many other nations have rushed to support Thein Sein and stake their claims in the more open, more democratic nation that they hope lies just ahead. But the latest spell of violence serves as a reminder that reform is still embryonic: Far from defending the Rohingya community (the Burmese Muslims who bore the brunt of the recent violence), Thein Sein has publicly called for their deportation. Under his watch, hundreds of thousands of Rohingyas have been forced to flee, many taking a chance on the open seas in rickety rafts. Those who survive the journey will likely end up in squalid refugee camps in Malaysia, Bangladesh, or elsewhere.

Opposition leader Aung San Suu Kyi has called on Thein Sein to deploy more troops to the affected state of Rakhine in western Myanmar, but she has been reluctant to engage fully on an issue that many of her supporters view as peripheral. This is an opportunity for the Nobel Peace Prize winner to demonstrate that she truly represents all the people of Myanmar.

Religious conflicts are often about resources rather than faith. Despite the headlines about clashes between Buddhists and Muslims in Myanmar, religious practice has virtually nothing to do with the strife.

The Rohingyas happen to be Muslim, but the conflict stems from the fact that they are seen as outsiders competing for very scarce resources. The majority of the Burmese population is Buddhist and ethnic Bamar (often called "Burman"); most inhabitants of Rakhine are ethnically distinct from the Burmese mainstream, but they are also Buddhist and speak a mutually intelligible dialect. The Rohingyas, on the other hand, come from a very different ethnic background, speak a wholly different language, and are regarded by Rakhine and Bamar alike as Bengalis rather than Burmese.

While some Rohingyas are recent migrants, most came to Myanmar generations ago, when the modern states of Burma, Bangladesh, and India were part of a unified British colonial administration. The point here is that neither the Buddhist nor the Muslim community is fighting over theology, religious practices, or other matters of faith: The conflict is rooted in disputes over land, jobs, and water—and would likely unfold in much the same manner regardless of the parties' religions.

Myanmar's political reforms will surely bring a wave of international investment: Thein Sein can alleviate ethnic tensions (and placate foreign investors) by ensuring that the Rohingyas and the Rakhine alike receive a sufficient share of the new opportunities.

Stereotypical views of religion (especially Islam) may fit poorly with real-world facts. The political scientist Samuel Huntington famously wrote that Islam has "bloody borders." Many pundits and ideologues have echoed this sentiment in legislatures and on television screens. The charge is that Islam, by its very nature, is somehow more violent and more expansionist than other faiths.

Few anthropologists of religion would support such a claim. The plight of the Rohingyas is but one counterexample: In this case, the victims of the violence are overwhelmingly Muslim, and the perpetrators overwhelmingly subscribe to a faith (Buddhism) that holds nonviolence to be a cardinal virtue.

4. Extreme weather may be a factor

Severe weather events may increase ethnic discord. This is an underappreciated aspect of the climate change debate. Both Myanmar and the Bengal region have long suffered from floods, cyclones, tsunamis, and other types of extreme weather.

Refugees have flowed out of Bangladesh since the nation was created in 1971, migrating not only to Myanmar but also to neighboring India and countries farther afield. This is nothing new. People have migrated from one place to another for all of human history.

What is new, however, is the possibility that climate change could spur increasingly rapid movements of increasingly large populations. The more that extreme weather wreaks havoc on delicately balanced ethnic mosaics, the more we are likely to see greater flows of refugees—and greater competition for the basic resources that every community needs to survive.

Why should we care what happens to the Rohingyas? Because they could be a harbinger of the future. We can expect to see continued jockeying for scarce resources among vulnerable populations around the globe, attempts by majority communities to disenfranchise powerless minority groups, and (as Hurricanes Sandy and Katrina reminded Americans) episodes of extreme weather to blow away any notion that disasters—whether natural, man-made, or both—can't happen here. The Rohingyas aren't as far away as they might seem.

This commentary originally appeared in Christian Science Monitor on November 19, 2012. Commentary gives RAND researchers a platform to convey insights based on their professional expertise and often on their peer-reviewed research and analysis.