Obama Trip Could Be Bellwether for U.S.-Asia Relations 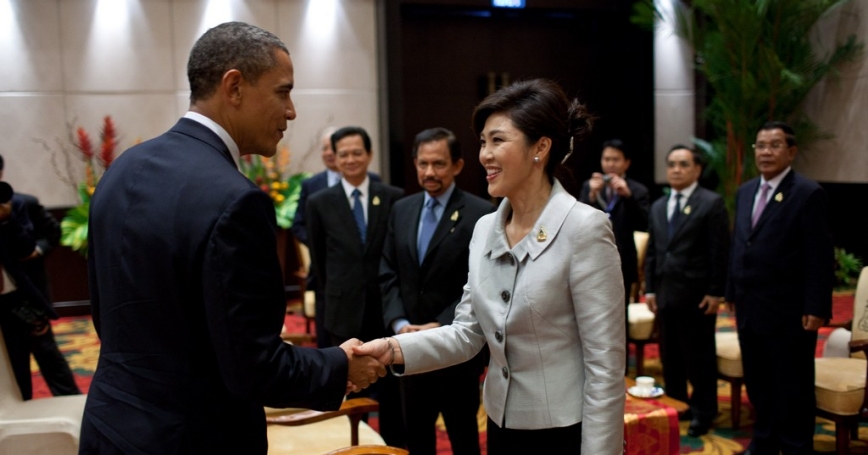 On his first trip abroad since winning reelection—and the first ever by a U.S. leader to Burma—President Obama will confront evident opportunities and risks in pushing ahead with his bold approach to expanding U.S. ties with Southeast Asia.

Obama will presumably attempt to carefully coordinate his messaging with Thai Prime Minister Yingluck Shinawatra. He'll want to ensure that U.S. efforts to improve relations with Burma and Cambodia do not catch U.S. ally Thailand—which has long had strained relations with both of its neighbors—off-guard or create a gap in expectations with Bangkok.

Obama may also use his meetings with leaders in all three countries to emphasize U.S. support for the peaceful resolution of border and territorial disputes, such as the conflict between Thailand and Cambodia over the Preah Vihear Temple.

Specific areas of focus for the visit are likely to include expanding trade and investment opportunities for U.S. businesses in Southeast Asia, increasing defense cooperation with Thailand, and offers of disaster recovery assistance to Burma in the wake of its recent earthquake.

Protocol would also suggest that Obama may extend an invitation to President Thein Sein to come to Washington sometime in the next year. Such an invite would likely be coveted by the Burmese leader as an opportunity to engage with the U.S. congressional and business communities and further rehabilitate his country's image in America.

For its part, the United States has a strong interest in encouraging Burma to continue the historic process of democratization, political amnesty, and reconciliation, as well as the establishment of civilian control over the military. President Obama may focus his discussions in Burma on how the United States can help the country achieve domestic reforms that will enhance transparency, accountability, and the rule of law.

Throughout his visit, Obama will also likely want to carefully explore perceptions and attitudes with respect to the growing power and assertiveness of China in Southeast Asia. Analysts in Beijing are likely to see the visit to Burma, in particular, through the lens of strategic power.

While the U.S. outreach efforts are motivated by a desire to improve ties with each country on its own terms, it is also clear that there are areas where U.S. and Southeast Asian countries' interests overlap. These include continuing access to the South China Sea and the peaceful resolution of the territorial disputes there between China and its neighbors. Obama may find it important to emphasize the U.S. goal of working with all three Southeast Asian nations to help sustain and further improve a rules-based international security architecture in the Asia-Pacific.

Finally, the United States brings tremendous resources and strong values to its engagements with its Southeast Asian counterparts. Important forms of U.S. soft power include U.S. economic development and environmental remediation assistance; intelligence sharing against criminal, terrorist, and human smuggling networks; support for disaster relief; and efforts to track and prevent the spread of infectious disease. Obama is likely to expand efforts to cooperate in these areas.

On a more abstract level, the values embodied by U.S. political democracy are another important form of power that Obama may exercise merely by showing up, talking about how the United States has handled its own political development, and listening respectfully to the experiences of America's Asian counterparts. In this way, he may underscore the universality of the values that have inspired generations of Americans and Southeast Asians to strive for more openness, transparency, accountability, and rule of law.

Scott Harold is an associate political scientist for the nonprofit, nonpartisan RAND Corporation.

This commentary originally appeared on The RAND Blog and GlobalSecurity.org on November 15, 2012. Commentary gives RAND researchers a platform to convey insights based on their professional expertise and often on their peer-reviewed research and analysis.