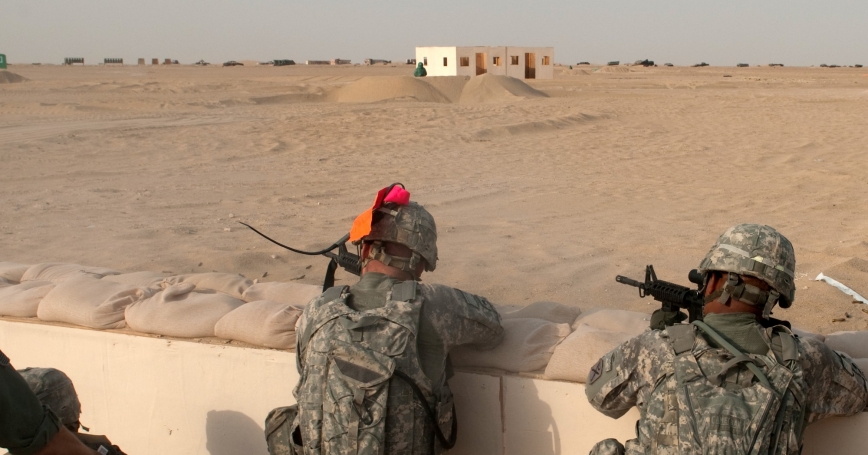 Economists, the media, and the general public are closely following the debate (and deadline) as policymakers struggle to come to an agreement on a solution to the potential fiscal crisis. In the shuffle, it can be easy for inaccurate numbers to form the basis for arguments and assumptions about outcomes. One particularly complex area is defense spending and associated cuts. The urgency with which the fiscal cliff question must be addressed should not excuse faulty calculations when it comes to the U.S. military's operational and personnel needs.

It is difficult to say what impact proposed cuts will have on the military's discretionary spending or how those cuts would, in turn, affect the force. However, it is important to approach this question—and the overall debate with regard to defense spending—from an accurate baseline.

For example, a statistic derived from a 2010 Defense Business Board study has been repeated to highlight perceived excesses of military staffing. The study claimed that 40 percent of the active-duty force had "never deployed." Not only was the conclusion misleading, but the number has been repeated in the current debate. (See, for example, this article last month in Foreign Policy.) The board was counting deployments to Iraq and Afghanistan only—not troops deployed to other U.S. overseas missions, such as Kosovo, the Multinational Force of Observers in Egypt, Honduras, South Korea, and elsewhere. This lack of specificity could lead to mischaracterizations of U.S. national defense needs and spending in the press and in Congress.

RAND research on Army force structure and personnel requirements has shown that during peak deployments to Iraq and Afghanistan, a third of the active force was in theater and another third had just returned. Most of the remaining third was new: recruits still in Initial Entry Training or—having completed the training—in the process of arriving at and integrating with units that had just returned home. It is most appropriate to refer to these soldiers as having "not yet deployed." As we can now verify with more recent data, these same soldiers would deploy when their units returned to theater.

Other soldiers who have "not yet deployed" include those hurt in training, cadets at West Point, and personnel in certain specialties, such as the medical service corps—who may directly support the war effort but are often assigned to hospitals and other duty stations outside of the theater.

Once we accounted for all the soldiers who had been in the Army long enough to have deployed, were not already committed to other theaters (i.e., were somewhere in the United States), and were not in a special status that slowed their availability for deployment, our analysis indicated that about 6 percent of the available active force had "not yet deployed." (Since our initial analysis, this category subsequently shrunk to 4 percent.)

There has also been much discussion about the tooth-to-tail ratio of the armed forces—that is, the number of troops devoted to "forces" versus "overhead"—which has been criticized as a prime target for streamlining. According to the FY 2012 Defense Manpower Requirements Report, 72 percent of Army active component troops were allocated to operational units (forces), and 28 percent made up the infrastructure category: soldiers in training, the wounded or injured, and the "generating force."

The generating force is the Army's "capabilities factory"—it trains soldiers, develops doctrine, and modernizes the force. As such, it is an essential part of the Army's infrastructure but should not, by best business practices (such as activity-based costing), be counted as overhead. Interestingly, many personnel who deploy to combat zones, such as soldiers assigned to the combatant commands, are included in the Army's infrastructure account.

Inaccurate statistics and characterizations of defense spending can be easily absorbed into the debate about the how to stave off a financial crisis, but policymakers must ensure that they do not also find their way into legislation with potentially unintended consequences.

Tim Bonds is vice president and director of the RAND Arroyo Center and Lauren Skrabala is a research editor at the nonprofit, nonpartisan RAND Corporation.

This commentary originally appeared in The Orange County Register on December 10, 2012. Commentary gives RAND researchers a platform to convey insights based on their professional expertise and often on their peer-reviewed research and analysis.