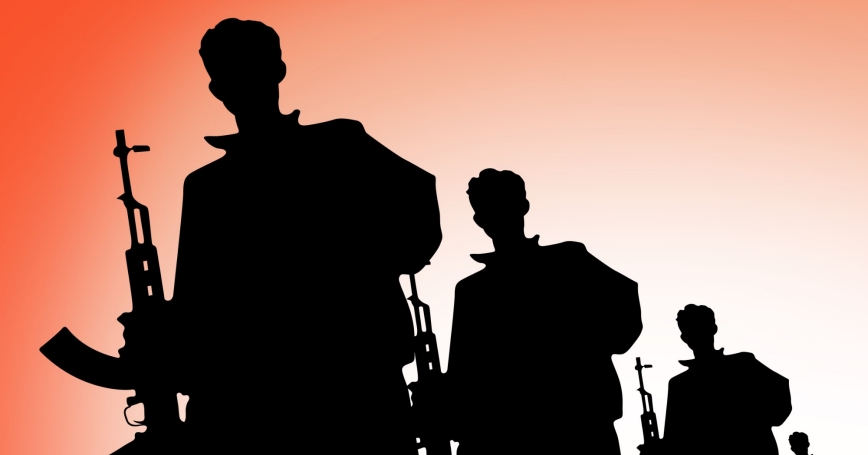 The terrorist plot uncovered recently by Jordanian authorities raises concerns about the resurgence of al Qaeda in Iraq (AQI), the growing numbers of combat-experienced jihadists being generated by Syria's continuing civil war, and the future terrorist threat to the region. The plot itself envisioned a complex operation beginning with bombings at shopping malls in Amman, followed by armed assaults on Amman's luxury hotels. After these assaults, a third wave of terrorists was to attack the American embassy and its surrounding neighborhood with bombs, machine guns, and mortar fire. The attack would have rivaled the November 2008 terrorist assault on Mumbai in which 162 people died.

The conspirators were members of an extreme Salafist group in Jordan. They had gone to fight in Syria, where they planned to obtain their explosives and weapons. Material recovered at their arrest also revealed connections to terrorists in Iraq.

Jordan has long been a target of Middle Eastern terrorism. In the 1970s, the terrorist threat to Jordan came from Palestinian groups that until then had operated as a state within a state in the country. These groups fielded their own militias and launched commando raids against Israel, thereby exposing Jordan to Israeli retaliation. Hard-line Palestinian groups went further, advocating the overthrow of the king—and several assassination attempts were made.

Tensions had already erupted into open battles between Palestinian militiamen and the Jordanian army before September 1970, when members of the Popular Front for the Liberation of Palestine hijacked five airliners, landing three of them at Dawson Field, an abandoned airfield in Jordan where the terrorists continued to hold hundreds of hostages while bargaining for their demands. The hijackers called Dawson Field "liberated territory," implying that they intended to liberate Palestinians from both Israeli occupation and Jordanian rule. That challenge prompted Jordan's King Hussein to order a military offensive against the militias, initiating a bloody civil war that Palestinians refer to as Black September.

The expulsion of the Palestinian fighters from Jordan and the country's subsequent modus vivendi and eventual peace treaty with Israel made Jordan a traitor in the eyes of Arabs dedicated to Israel's destruction. Secular ideologies have since been exchanged for ideologies based upon religion, but Jordan remains a target.

In 1999, Jordanian police interrupted a terrorist plot to bomb the Radisson Hotel in Amman and three others sites in Jordan. The bombings were one component of the so-called Millennium Plot to carry out coordinated terrorist attacks on or around January 1, 2000. Terrorists also planned to bomb the Los Angeles International Airport on that New Year's Eve. An attempt in Yemen to sink an American destroyer, the USS The Sullivans, on January 3, 2000, also failed.

Since 2000, authorities in Jordan have thwarted various plots to assassinate British, American, and Israeli officials; detonate bombs at Christian landmarks and tourist sites; attack Amman's airport; blow up the headquarters of Jordan's intelligence service; and, most ambitiously, launch chemical attacks in Amman that could have killed thousands of people.

The terrorists actually achieved considerably less. They assassinated an American diplomat, killed and wounded a number of tourists, fired rockets at the city of Aqaba, and set off smaller bombs. Their most spectacular success came in 2005, when they carried out suicide bombings at three luxury hotels in Amman, killing 60 people and wounding 115.

News coverage of terrorist plots often lacks context and misses connectivity. The 2012 plotters explicitly hoped to surpass the 2005 hotel bombings in Amman. These had been carried out at the direction of Musab al Zarqawi, who, at the time, led AQI. A Jordanian of Palestinian descent, Zarqawi had gone to Afghanistan in 1990, where he met Osama bin Laden and others who were beginning to assemble the global jihadist enterprise. Returning to Jordan in 1992, Zarqawi created his own terrorist network but was soon arrested and sentenced to jail. Released in 1999, he fled to Iraq, where he continued to plot attacks against the Jordanian government. He was sentenced in absentia for his role in the 1999 Millennium Plot.

The U.S. invasion of Iraq and the subsequent Iraqi insurgency gave Zarqawi additional recruits and resources. He was involved in a 2004 plot to blow up Jordan's intelligence headquarters and spread poison gas across the capital and was behind the 2005 hotel bombing. Zarqawi was killed in 2006, but AQI continued its terrorist campaign in both Iraq and Jordan, claiming responsibility for a 2010 rocket attack on Aqaba. This gives us a connection among individuals, organizations, and events more than two decades long.

The 2012 plot reflects even deeper currents of inspiration and imitation. The failure of Arab governments to destroy the state of Israel gave rise to a generation of Palestinian organizations determined to use terrorist campaigns to achieve what Arab armies could not. Their strategic mentors were the insurgents of the Front de Libération Nationale (FLN) in Algeria, which waged a continuing campaign of terrorism in Algeria and France to bring about French withdrawal and Algerian independence. The truth of the achievement of independence was more complicated than that, but this was the myth of the FLN's victory.

If terrorism could drive out the French, who had been in Algeria for more than 130 years, it was not unreasonable for Palestinian militants to hope that they might destroy Israel, a creation of colonial governments and in existence as a state for little more than two decades. The exploits of Palestinian terrorists inspired later generations of street-toughs-turned-fanatics, like Zarqawi.

These radicals, in turn, found ideological reinforcement, practical training, combat experience, and useful connections in Afghanistan during the war against Soviet occupation and later civil wars. More than 20 years later, the world is still dealing with the effluent of the Afghan conflict.

Veterans from the Afghan and Iraq wars have been augmented during the last two years by fighters from the conflicts in Libya and later Syria, now the destination for jihadists worldwide. Whatever its eventual outcome, Syria's civil war has already produced thousands of experienced jihadists who will continue to threaten the region for years to come.