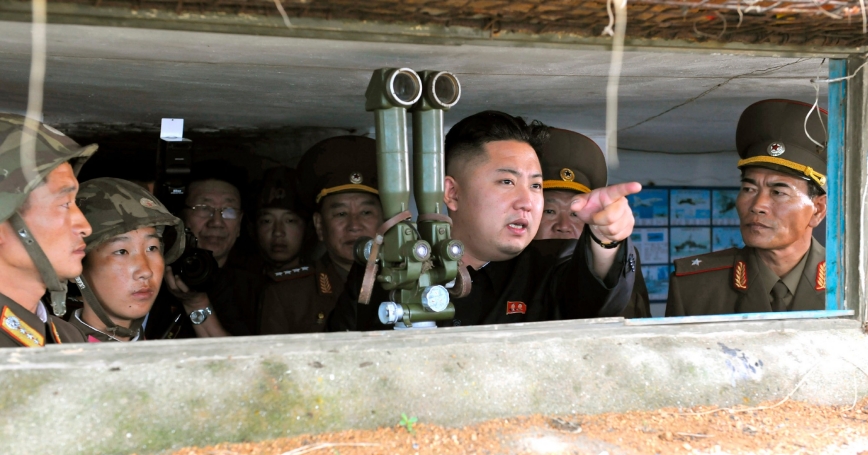 North Korean leader Kim Jong-Un visits a military unit on an island in the most southwest of Pyongyang in this picture released by KCNA news agency August 18, 2012

To the surprise of much of the world, North Korea launched another long-range missile early Wednesday, reportedly trying to send a satellite into orbit. The surprise was not that the launch occurred, but that it occurred so soon after many reports of problems with the missile and the need to replace parts of it. North Korea has apparently developed some nimbleness in assembling and preparing such a missile, which is unsettling given the potential threats that long-range missiles pose.

Moreover, this North Korean launch was in defiance of several UN Security Council Resolutions, and thus is likely to draw further international sanctions. So why would an impoverished country that needs international assistance do this?

In part, this launch is in remembrance of the death of Kim Jong-Il, North Korea's leader, almost one year ago (Dec. 17, 2011). But more importantly, I believe it is an effort to demonstrate that the regime of Kim Jong-Il's third son and successor, Kim Jong-Un, is capable and empowered, an important aspect of North Korean culture. While many observers of North Korea have been surprised by the apparently peaceful ascension of Kim Jong-Un, there are reasons to believe that the situation in the North is not so stable:

Some defectors speak of a growing uneasiness among the elites in North Korea: The leadership change to Kim Jong-Un has not improved lives as many had desired, while enforcement of regime control has become more strict and repressive. There is a sense of disappointment, and a dimming of hope.

For many years, North Korea has used various forms of provocation to demonstrate regime power, hoping to divert attention from and thereby manage the regime's failures. Little surprise then that the North Korean leaders are preparing new provocations, such as this latest "satellite" launch, attempting to convey the appearance of regime success in some dimension, and thereby make Kim Jong-Un appear empowered.

Unfortunately, one or two minor provocations are unlikely to provide the political boost that the regime needs. We could therefore see a nuclear test follow soon after the launch (as in 2006 and 2009), or perhaps even new limited attacks (as in 2010).

But the North Korea leaders may have learned in 2010 that attributable provocations like the artillery attack on Yeonpyeong Island can actually unify conservatives and progressives in South Korea and strengthen the South Korea/U.S. alliance. Those experiences and North Korea's desperate need for food aid could lead to plausibly deniable attacks like the sinking of the warship Cheonan in 2010. The result could be more submarine attacks or perhaps even special forces attacks against South Korea, with North Korea claiming to be innocent.

Alternatively, some of those fearing purges could take action against the North Korean regime, perhaps even trying to assassinate Kim Jong-Un and/or his uncle and apparent regent, Jang Song-Taek. Similar assassinations were reportedly attempted against Kim Jong-Il in 1994-5, soon after his succession.

The recent missile launch may only be a start. The upcoming months thus could see great turmoil in and around North Korea. The United States and South Korea will need to prepare for a wide range of possible developments.

This commentary originally appeared on U.S. News & World Report on December 12, 2012. Commentary gives RAND researchers a platform to convey insights based on their professional expertise and often on their peer-reviewed research and analysis.