Firearms and Gun Control: Many Questions, Some Answers 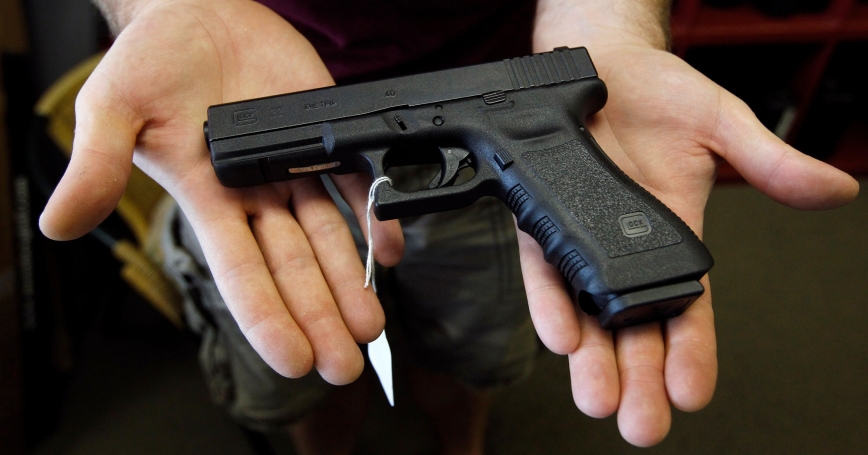 A Glock 22 pistol is displayed at the Rocky Mountain Guns and Ammo store in Parker, Colorado, July 24, 2012

President Obama's task force on gun violence released its findings yesterday, raising the stakes in the policy debate on gun control and policy in the wake of the recent shootings in Aurora, Colorado, and Newtown, Connecticut. The mix of legislative proposals and executive actions includes measures to improve background checks for firearm purchasers, trace guns used in criminal acts, ban assault weapons and high-capacity magazines, and improve access to mental health services. The horrific attack at Sandy Hook has stimulated a national conversation on guns and the role that policies can play in reducing gun violence in the United States, but the problem of gun violence is larger and much more complex than mass shootings.

How Big Is the Problem of Firearm-Related Deaths in the United States?

Guns claim the lives of thousands of people in America every year. In 2010, according to data (PDF) from the Centers for Disease Control and Prevention (CDC), more than 31,000 people were killed by guns in the United States.

How Does the Total Number Break Down by Type of Incident?

In 2008, for which there is readily comparable CDC (PDF) and Department of Justice (PDF) data, more than 18,000 of the more than 31,000 total gun deaths were suicides, and just over 12,000 were homicides. Close to 3,000 gun deaths occurred among children or teens (PDF): 2,037 homicides and 748 suicides. Only a small percentage of gun-related homicides occurred in incidents in which more than one person was killed — more than 95 percent of homicide incidents had only a single victim (PDF). So events like Newtown and Aurora are the outliers, not the norm.

Firearm homicides occur at higher rates in urban areas. Using 2006–2007 data from the National Vital Statistics System and the U.S. Census Bureau, the CDC (PDF) examined homicide rates of the 50 largest metropolitan areas and their central cities. Compared to the national average of 4.2 homicides per 100,000 people, the metropolitan area rate was 5.2, and the central city rate was 9.7 per 100,000 people.

How Does the United States Stack Up Against Other Countries in These Various Metrics?

What Do We Know About How to Reduce Deaths in These Different Categories?

The first step in taking on the issue of firearm deaths requires being clear about which part or parts of gun violence current and proposed policies are intended to address.

Reducing gun suicides or the smaller number of accidental deaths from firearms will likely require approaches that differ from those with the goal of tackling gun crime. For example, numerous studies have indicated that restricting access to highly lethal means of suicide decreases suicide rates among at risk individuals. While research (PDF) has found this principle to hold true across suicide means other than guns, firearms are the most common method of suicide in the United States. Recent research has found U.S. suicide rates to be associated with a variety of metrics related to access to guns, including household firearm ownership and state firearm regulations. At least some research indicates that safe-storage laws do not have an effect on accidental shootings or juvenile suicide rates.

Controlling gun-related single and multiple homicides presents equally daunting challenges. There are two main approaches: restricting access by dangerous individuals and deterring illegal use. Much of the regulatory framework is focused on preventing some individuals — criminals and the potentially violent — from obtaining and owning firearms. Although it makes sense to keep guns out of the hands of violent and unstable people, the challenge is in distinguishing potentially violent people from others and recognizing these individuals' behavior against a background of others' behavior. Distinguishing individuals who will act violently from those who will not — even among populations that have made threats — is still a serious challenge. Besides the difficulty of distinguishing among individuals, background checks also fail to cover many transactions. Under current rules, background checks are not implemented in most private-party transactions (sales between individuals) or at many mass sales events, such as gun shows.

However, the size of illegal gun markets and the frequency of straw purchases — the purchase of a gun by someone who can pass a background check for delivery to another — make it daunting to keep firearms out of the hands of prohibited possessors. Some RAND research suggests that law enforcement–initiated actions can have an influence on gun transfer and ownership behavior. This research found that sending signed letters to new gun buyers indicating that local law enforcement was aware of their gun purchase and that future transfers of the gun needed to be properly recorded influenced these gun buyers' future behavior. Buyers who received a letter were more than twice as likely to report a stolen gun as those who did not receive a letter.

Because of the potential for mass casualties caused by semiautomatic and assault-type weapons, the President's task force and others have advocated for a reinstatement of an assault weapons ban. Although homicides decreased during the period in which the assault weapons ban was in place, and there have been reports of larger numbers of such weapons involved in crimes since its expiration, studies examining the effects of the ban were unable to directly attribute the decrease to the ban on assault weapons. This is likely because semiautomatic and automatic weapons are used in only a small percentage of crimes, and because of loopholes, a large number of weapons and ammunition were still legally available. There is some evidence pointing to an effect of the ban on reducing mass murders, but a definitive conclusion cannot be drawn from that evidence.

Access to ammunition represents a relatively unexplored area of gun policy. The City of Los Angeles has long required ammunition purchasers to show identification and for retailers to maintain a log. A simple analysis of store records showed that many people who were prohibited from purchasing guns were nevertheless buying ammunition. Those individuals could be prosecuted for such purchases as parole violations. The analysis also demonstrated that straw purchases of ammunition are a relatively common practice. Background checks of ammunition purchasers may not be practical. However, over their lifetimes, people likely engage in more ammunition than weapon purchases, offering increased opportunity to review their backgrounds for changes in criminal behavior and propensity for violence. Research methods that measure regulatory burden, drawing on lessons from other areas, could contribute to better understanding of the costs and benefits of this and other regulatory approaches.

Deterring the Use of Guns by Criminals and the Potentially Violent

If preventing access to firearms for the criminal and the potentially violent is difficult, what about deterring them from using firearms? Here, again, the terrain is complicated, though there are examples of success.

RAND and others have demonstrated that violent behavior can be ameliorated through interventions such as Operation Ceasefire that coordinate police, probation, parole, and other services to reduce violence in higher-risk communities. Other policing strategies that focus on deterring violence with varying degrees of success include proactive patrolling based on location and time of day, hot spots policing, and other focused intervention and deterrence activities. Following the intervention, these communities experienced a decrease in violence, with little evidence that the violence was displaced to other areas. While promising, these coordinated efforts require a significant amount of financial resources, are difficult to implement, and seem most appropriate in situations in which a community is already in crisis, making widespread implementation of this particular model unlikely.

The Role of Law Enforcement and the Criminal Justice System

The role of law enforcement and the courts in reducing further incidents of gun violence has also been at the forefront of the gun violence discussion. There have been efforts to impose harsher sentences for gun crimes, producing stark differences in federal versus state or local penalties in some areas. Although such harsh penalties could potentially deter gun crime, how they play out depends on complex dynamics in prosecution, plea bargaining, and pressure to resolve criminal cases without costly trial proceedings. Seeking to deter gun violence in the context of criminal behavior through changes in law requires understanding how those laws will be applied throughout the criminal justice system and resourcing the system to produce the outcomes desired.

Finally, questions about the influence of violent media content on the likelihood of subsequent gun crime have frequently been raised. In general, research has found a link between media exposure and a range of subsequent adolescent behavior. Some RAND research has found an association between exposure to sex in the media and adolescent sex outcomes. A large body of research indicates an association between exposure to violence and later aggressive behavior in some children, though, obviously, not all children exposed to forms of violent media go on to commit violent behavior. More research is needed to better understand the causes and effects of media exposure on gun violence and what can be done to address violence in the media. And those means of course must be squared with the First Amendment.

What Can We Say About Transitional Strategies and How the Effects of Changes in Law or Regulation Will Develop Over Time?

The vast number of guns in circulation in the United States — approximately 270 million — raises significant questions about the time frame over which the nation can reasonably expect new policies to have an effect, the gains that can be achieved in the short run, and the equity of the distribution of burden that any restriction on gun access entails. Recent spikes in the sale of guns and ammunition across the board, including models of firearms that would likely be included in any enacted restrictions, has further increased the existing pool of weapons in the country. To fully understand the long-term implications of any policies, more research is needed to model the life cycle of guns, gun introduction and exit rates of firearms in the United States, and the likely prevalence of guns going forward under alternative gun restriction policies.