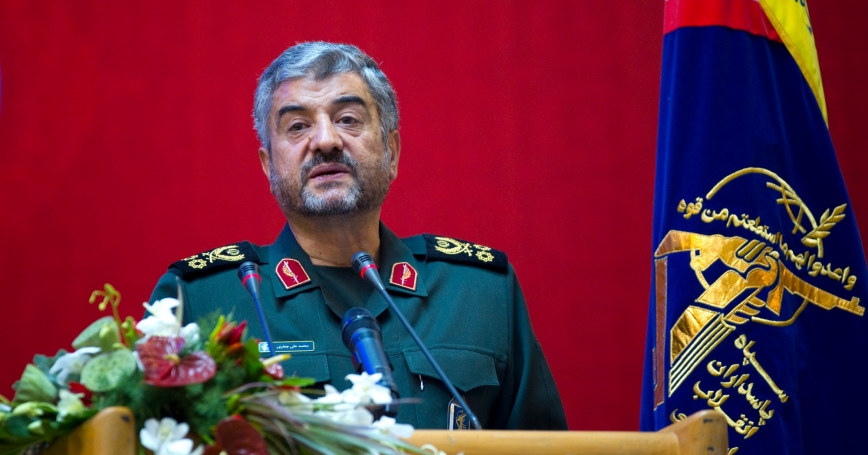 Iran's Revolutionary guards commander Mohammad Ali Jafari speaks during a conference to mark the martyrs of terrorism in Tehran, September 6, 2011

As commander of the Revolutionary Guards, General Mohammad Ali Jafari is one of the dozen most powerful men in Iran. He is a hard-line ideologue loyal to Supreme Leader Ayatollah Ali Khamenei. He rose to power through a combination of ideological commitment and military vision. Jafari now commands one of the most feared militaries in the Middle East, which is also far better equipped than Iran's conventional army, navy and air force.

Jafari has an estimated 150,000 troops under his control. The Islamic Revolutionary Guards Corps has its own powerful army (between 100,000 and 125,000), navy (up to 20,000) and air force (about 20,000). It also oversees several thousand members in the elite Qods Force, which trains and supports foreign insurgent organizations.

Yet Jafari also commands a force divided by personal and political rivalries and under pressure from unprecedented sanctions that specifically target him, the top military leadership and the many military and economic wings of the Revolutionary Guards. He still has to prove whether he can protect and preserve an increasingly exposed regime.

Jafari now has two pivotal missions: First, to defend Iran from external threats, including a military strike by Israel or the United States. Second, to defend the Islamic Republic from internal challenges, including from the reformist movement. His re-organization of the Guards in recent years was designed to achieve both objectives.

The Revolutionary Guards chief has used some of the toughest language in describing the dangers of attacking Iran. “If a war breaks out where one side is Iran and the other side is the West and U.S., it's natural that a problem should occur in the Strait of Hormuz. Export of energy will be harmed. It's natural that this will happen,” he said in September 2012.

He also warned that Iran might withdraw from the Nuclear Non-Proliferation Treaty and attack U.S. bases in the Middle East. In the September news conference, he said Iran could obliterate Israel if it hit Iran. “Our response to Israel is clear: I think nothing will remain of Israel [should it attack Iran]. Given Israel's small land area and its vulnerability to a massive volume of Iran's missiles, I don't think any spot in Israel will remain safe,” he said.

Appointed commander in 2007, Jafari has implemented ideas developed in previous positions, including asymmetric tactics in case of conflict with the United States or Israel. “Given the enemy's numerical or technological superiority, the IRGC would use asymmetrical warfare capabilities, such as those used by Hezbollah in its 2006 war with Israel in Lebanon. Iranian strategy would also reflect the strengths and weaknesses of the U.S. forces in Afghanistan and Iraq,” he said three days after his appointment.

One of his key moves was dividing Iran's military command-and-control into 31 distinct units, each of which could function independently in the case others were hit or destroyed. He also merged the Basij—which can mobilize hundreds of thousands of paramilitary forces—under the Guards command.

Jafari's restructuring of the Revolutionary Guards enhanced Tehran's ability to counter an outside military attack. But it also helped the regime counter internal disturbances. The regime experienced its most serious challenge after President Mahmoud Ahmadinejad's disputed re-election in 2009, when millions of protesters took to the streets throughout Iran to contest the outcome.

Jafari has since framed the 2009 protests as “sedition” against the Islamic Republic. In 2010, he said, “The root cause of what happened in the election and over the past eight months” reflected differences between “two fundamentally different views, one Islamic, and the other one materialistic.” He has repeatedly pledged that the Guards would oppose reformists participating in future elections. But he has also distanced himself from Ahmadinejad over the president's political challenges to the supreme leader.

Jafari has come a long way under the revolutionary regime. He was born to a poor family in the central city of Yazd. He participated in demonstrations against the monarchy. After the shah's overthrow, he joined the new Revolutionary Guards intelligence unit and served in the western Kurdish region. After Iraq's invasion, Jafari held several senior positions during the eight-year war, a key credential in his rise to power.

In 1992, after the war, Jafari was appointed commander of the Guards ground forces, in addition to commanding Tehran's Sarallah unit that is responsible for protecting Tehran. He was reportedly deeply affected by the 1999 Tehran student riots, the largest internal disturbance since the 1979 revolution up to that point. Jafari was one of 29 Revolutionary Guards officers who wrote a letter to then President Mohammad Khatami implicitly threatening a coup if Khatami continued his reformist agenda.

Jafari became the director of the Guards' Center for Strategic Studies in 2005. During his tenure, he identified two critical threats to the Islamic Republic: a foreign attempt to foment a “soft revolution” through support of Iranian NGOs and activists and a U.S. military attack that could topple the regime. He used those experiences to craft Iran's current military strategy—at what could be a pivotal turning point in the nuclear crisis.

This commentary originally appeared on The Iran Primer, USIP on January 21, 2013. Commentary gives RAND researchers a platform to convey insights based on their professional expertise and often on their peer-reviewed research and analysis.