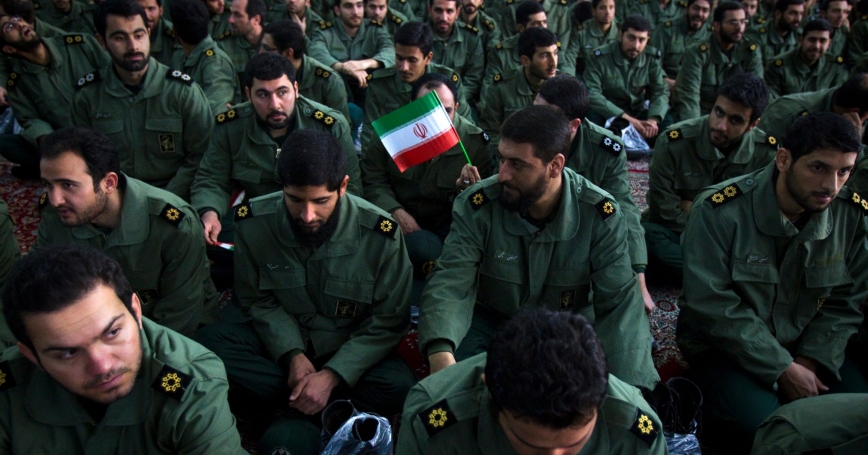 Members of the revolutionary guard attend the anniversary ceremony of Iran's Islamic Revolution at the Khomeini shrine, February 1, 2012

Although the benefits of the US sanctions policy are not always tangible, the answer to both questions could very well be yes. The Guard is one of the most powerful economic, political and military actors in Iran today. It is often motivated not only by its devotion to the revolution and the regime, but also by a desire to line its own pockets.

Many members have become fabulously wealthy since Mahmoud Ahmadinejad became president in 2005, such as the current Minister of Interior, a former Guard officer and Ahmadinejad buddy reported to be worth hundreds of millions of dollars. The Guard depends on state resources, especially the billions of dollars in oil and gas revenues that flow into the regime's coffers every year. Iran's inability to sell its oil due to sanctions will not only shrink the resources available to the Guard as a military force, but will crimp the wealth of individual Guard officers. This could erode the Guard's loyalty to Supreme Leader Ayatollah Ali Khamenei — and perhaps even change the regime's unyielding stance on the nuclear program.

The Islamic Revolutionary Guard Corps was created to protect the Islamic Republic from internal and external challenges. Over time, it has come to dominate the regime it was meant to protect. The Guard is the biggest economic actor in Iran, with a hand in virtually every sector — not only oil production but also auto-making, telecommunications, construction and beyond. It has thrived due to an implicit deal with Khamenei: He opens the state's resources and treasury to it, and it buttresses his often shaky authority as Iran's Supreme Leader.

If not for the Guard, Khamenei may have not survived repeated challenges from reformists, dissatisfied clerics, wide sections of the Iranian population, the United States and the increasingly pesky President Mahmoud Ahmadinejad.

At first, Ahmadinejad followed the script written for him by Khamenei, who not only strongly supported but ensured his election in 2005 and 2009. However, convinced of his own charisma and popularity, Ahmadinejad came to see himself as more legitimate than Khamenei and the clerical system. His 2009 re-election, publicly supported by Khamenei and largely viewed by Iranians as fraudulent, only appeared to increase his sense of self-importance and accomplishment. But his April 2011 dismissal of the intelligence minister over Khamenei's objections began a subsequent public rebuke from the Guard and other conservatives that proved to be Ahmadinejad's undoing. The Guard recognized that its long-term relationship with Khamenei outweighed its association with Iran's upstart president.

Khamenei and the top echelon of the Guard share a similar worldview: a regime besieged by numerous internal and external foes, but nevertheless capable of warding off threats through self-sufficiency and aggression. Khamenei has not budged on widespread demands for political reform and flexibility on the nuclear program because he has not needed to. Not until now, anyhow. The Guard has made sure he could get away with maintaining the status quo.

The Guard is not merely loyal to Khamenei because he is the leader of the revolution and Iran's ultimate religious and political authority. Khamenei has also made many of its members incredibly wealthy. The Supreme Leader has supported the privatization of state industries under Article 44 of the Iranian constitution. And indeed, many Iranian companies have been privatized in recent years. But as was the case with post-Soviet Russia, the beneficiaries have been dominated by the security and military elite. The real Iranian private sector of independent businessmen and companies with little connection to Khamenei's inner circle have been left on the sidelines. In addition, the Ahmadinejad government, with Khamenei's blessing, initially provided Guard-controlled companies with billions of dollars in no-bid contracts and loans. And the Guard often used “national security” as an excuse to sideline private competitors.

But Iran's perilous economy may change the Guard's devotion to its Leader. The Revolutionary Guard did not appear to have suffered greatly until Iran's Central Bank came under sanctions and the European Union ceased its imports of Iranian oil. The days of unlimited largesse for Khamenei loyalists may be over. Iran earned up to $110 billion from oil exports in 2011 — an amount likely to have decreased by 50% in 2012. Much of what's left will have to go toward government expenditures such as paying public employees. The Guard will not go hungry, to be sure. But it will certainly feel the squeeze, especially if the regime does not concede on the nuclear program. And many of its members, having put wealth and power above all else for so long, may doubt the path Khamenei has chosen for not only millions of innocent Iranians, but the Revolutionary Guard as well.

This is not to suggest that Khamenei and the Guard will compromise easily on the nuclear program. Yet we should recognize that the Supreme Leader and his military henchmen are swayed by economic pressure more easily than has been assumed. While they may declare their willingness to resist the United States at all costs, what keeps Khamenei and his regime alive today is not revolutionary zeal, ideological resistance or religious devotion. It is money — the lack of which could ultimately compel the Guard and its Leader to make a deal.

Alireza Nader is a senior policy analyst at the nonprofit, nonpartisan RAND Corporation and a lecturer on Iranian politics at George Washington University.

This commentary originally appeared on Al-Monitor on January 4, 2013. Commentary gives RAND researchers a platform to convey insights based on their professional expertise and often on their peer-reviewed research and analysis.