(NYTimes.com on February 18, 2013 and in International Herald Tribune) 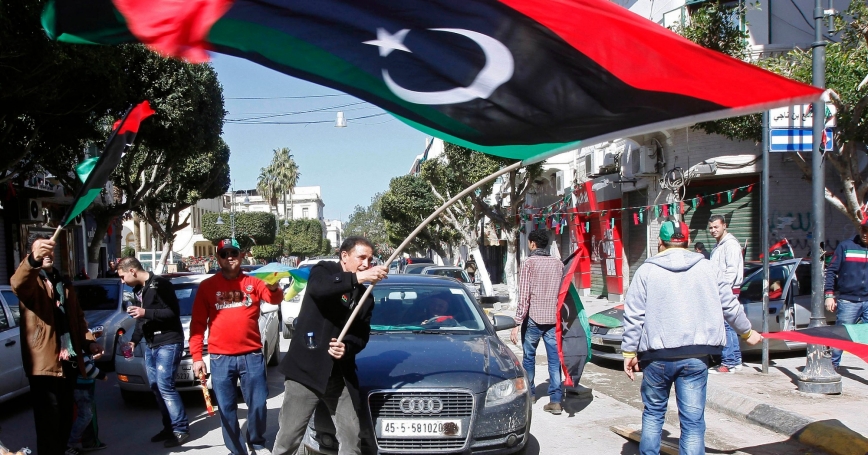 A man waves a Libyan flag during celebrations commemorating the second anniversary of the February 17 revolution in Tripoli February 17, 2013

Over the weekend, Libya celebrated the second anniversary of the outbreak of the revolt that toppled Muammar el-Qaddafi. The violence many had feared was avoided, but this should not be cause for complacency.

The clock is ticking for Libya's future. Libya's government is dysfunctional, armed militias control much of the country, and the population is increasingly frustrated with the pace of postwar progress. Libyans and international actors must act now to stave off a slide back into civil war.

Walking the streets of Tripoli, the threats to Libya's security can easily seem exaggerated. You can enjoy a coffee at a picturesque Mediterranean café. The tanks and guns are out of sight.

But asking the wrong questions at that café can get you nabbed by a militia. At the Parliament, armed former revolutionaries intimidate legislators, reminding them of the power of the street.

When they speak of the situation in Benghazi, Libyans—including members of Parliament—are markedly pessimistic. Ansar al-Shariah, the militia responsible for the attacks on the U.S. diplomatic facility in that city, is still strong and carries a powerful appeal to unemployed youth.

If the government has a little control over security in Tripoli, it has none outside it. Last fall, the government was powerless to stop the fighting as nearby Bani Walid was besieged by militias from Misurata. Tribes are battling over turf in the south, and when the defense minister flew in to negotiate a peace, he was attacked in his hotel. As insurgents retreat from Mali ahead of advancing French forces, they will likely make the situation more dangerous.

The government has imposed martial law and declared the border closed. But lacking an army, these pronouncements are hardly enforceable. The borders are porous and easterners report a recent influx of “foreigners” with suspicious agendas. At the same time, extremists have found fertile ground for recruitment among disillusioned youths.

Several Libyans with whom a colleague and I recently spoke, including members of the Parliament, acknowledged that a group of radicals were entrenched outside the town of Derna, east of Benghazi. In Benghazi, the situation is only marginally better. Ansar al-Shariah remains strong despite protests against it by the local population. Press reports have linked eastern extremists to Mokhtar Belmokhtar's terrorist attacks in Algeria in January.

A legislator from the eastern region told us that the police in his city dare not go outside in uniform. Attacks on officials in Benghazi have metastasized from settling old scores from the Qaddafi era into what could be a coordinated attempt to further destabilize the situation.

The longer these conditions persist, the more entrenched the extremists will become. Restoring security in the east admittedly will be difficult given the woeful capacity of the Libyan government and the growing constraints on foreign diplomats who are under constant threat of attack. Nevertheless, a new push to co-opt as many of the militias and tribal leaders as possible, restore the credibility of the Tripoli government, tighten control over borders and improve economic conditions in the region needs to start now.

The longer it takes to do this, the greater the chances for Libya to become mired in a long-term cycle of violence and political chaos. This would be disastrous for Libyans and for all who helped bring Qaddafi's rule to an end.

Christopher S. Chivvis is a senior political scientist at the RAND Corporation and author of the forthcoming “Toppling Qaddafi.”

This commentary originally appeared on NYTimes.com on February 18, 2013 and in International Herald Tribune on February 19, 2013. Commentary gives RAND researchers a platform to convey insights based on their professional expertise and often on their peer-reviewed research and analysis.