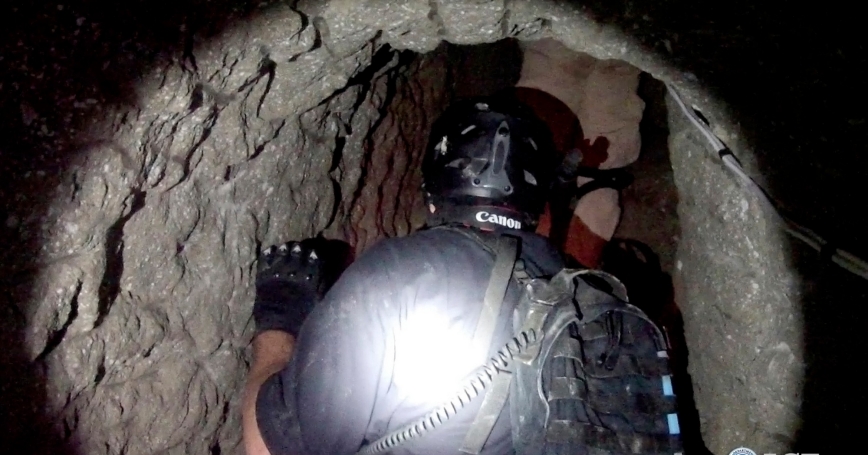 A Homeland Security agent enters a tunnel used to smuggle drugs between the U.S. and Mexico

The war on Mexico's criminal cartels dominated the presidency of Felipe Calderon. If the country's new president, Enrique Peña Nieto, has his way, it will not dominate his administration. And although the United States applauded and supported Calderon's campaign, absent evidence that Mexico's ruling Partido Revolucionario Institucional is returning to the bad old days of lucrative détente with drug traffickers that characterized its administrations in the 1990s, the United States will not demand that Peña Nieto make continuing Calderon's campaign his primary focus.

President Peña Nieto and President Obama both face daunting domestic challenges and have ambitious domestic agendas. Critically, both administrations need a measure of tranquility and prosperity in Mexico to succeed in meeting their goals.

Although inviting more foreign investment in Mexico's oil industry would be a politically unpopular move, Peña Nieto sees it as a path to obtaining needed capital and know-how. The new president has also promised education reform. Foreign participation in Mexico's energy sector would alter the way Mexico funds its social programs. For Peña Nieto, such changes will require taking on the country's unions and other vested economic and political interests.

Across the border, President Obama must deal with a still-fragile economy, a large deficit and a huge national debt, while pushing for gun control and immigration reform. Immigration reform seems to have broader bipartisan support in the United States, though differences about details could destroy any consensus. Some argue that before fixing immigration, the nation must better secure its borders. The perception of Mexico as a crime-infested badlands exporting drugs and violence turns the discussion into a national-security debate, which is the wrong framework for meaningful immigration legislation.

Despite their unique domestic challenges, both Obama and Peña Nieto believe that increasing bilateral trade and further integrating the Mexican and U.S. economies will serve the long-term interests of both countries. These measures will keep U.S. companies competitive and fuel Mexico's continued growth.

Indeed, neither president wants to be knocked off course by continued high levels of criminal violence in Mexico. At a very basic level, violence in Mexico reduces tourism — an important source of revenue for the country — and discourages U.S. companies from expanding their operations south of the border. Jobless Mexicans, in turn, head north and become undocumented workers in the United States. Maintaining and encouraging Mexico's gains will undoubtedly benefit both presidents' agendas.

Not party to any mutual understanding between Mexico City and Washington, the cartels are the wild card. Calderon did not seek a war with gangsters, but they challenged the government's authority. If they are smart, the cartels will seek to protect their profitable enterprises by reducing the number of massacres while police take down the less organized, more violent criminal gangs.

Brian Michael Jenkins is senior adviser to the president of the nonprofit, nonpartisan RAND Corp.

This commentary originally appeared on The Orange County Register on February 19, 2013. Commentary gives RAND researchers a platform to convey insights based on their professional expertise and often on their peer-reviewed research and analysis.