Legalization and Border Security: Are We There Yet? 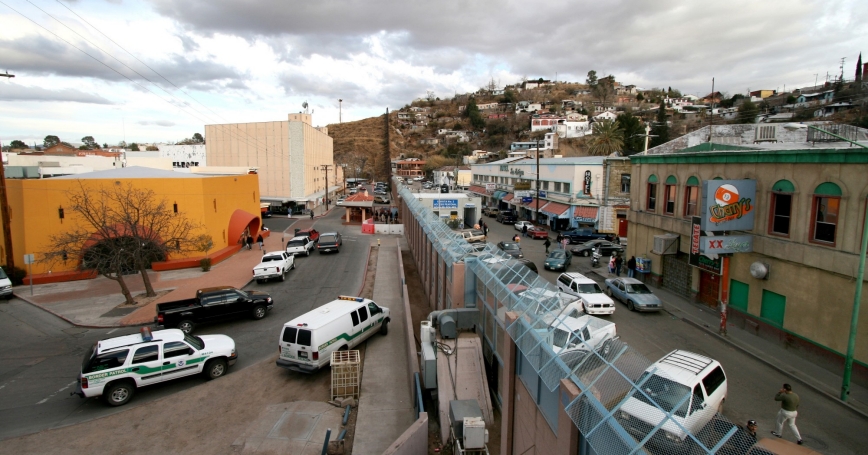 The towns of Nogales, Ariz., left, and Nogales, Mexico, stand separated by a high concrete and steel fence.

The White House and a bipartisan group of senators (PDF) recently unveiled proposals for comprehensive immigration reform. The proposals have many provisions in common. Both would increase border security and create new employment verification requirements, and both offer a path to citizenship for unauthorized immigrants currently in the country. Both would allow currently unauthorized immigrants to register, submit to a background check, pay some combination of fines, fees, and back taxes, and then gain a temporary “provisional” (Senate) or “probationary” (White House) legal immigration status.

However, one main difference is the Senate version's requirement that a commission certify that the border is secure before any immigrant with a temporary provisional status is granted permanent resident status (i.e., a green card) and allowed, after a three- to five-year waiting period, to apply for U.S. citizenship.

The Senate proposal raises a number of questions: How would success in securing the border actually be determined? Would it mean absolutely zero unauthorized immigration across U.S. borders? Would it require securing the border against the illegal importation of drugs and other contraband (and, for that matter, the illegal exportation of guns)? Is a secure border truly feasible?

Although the overwhelming majority of unauthorized immigrants who can pass the required background checks and would thus be eligible for legal status under the Senate proposal have no connection to Mexico's drug trade, Senator McCain made it clear that he believes a “secure border” requires stopping the flow of drugs: “To think somehow that we are going to have a situation where drugs can flow freely over our border is something that I don't think most of our citizens would agree [with], particularly since we spent so many billions of dollars on surveillance and that kind of thing.”

While it is challenging to accurately measure a hidden phenomenon like illegal immigration, the data suggest that unauthorized migration across the U.S.-Mexico border is at its lowest levels in at least 30 years. Statistics from the U.S. Department of Homeland Security show that the number of people apprehended (PDF) crossing the border is at levels last seen prior to 1975.

Apprehensions are recognized as a reasonable but imperfect proxy for the size of unauthorized flows, since they count events in which people were caught rather than the number of people successfully entering. Moreover, apprehensions fluctuate not only with the size of the migration flow but also with the Border Patrol's effectiveness in catching unauthorized migrants.

However, survey data collected in Mexico also show significant declines in migration to the United States since 2006. In addition to decreasing levels of migration, an increasing share of that migration is legal. Research from the Pew Hispanic Center has evaluated the evidence and concluded that the United States may have reached zero net migration from Mexico.

Given these significant declines in unauthorized migration across the southern border, one might ask whether the border is not already secure. If it is not, by what standard will we deem it secure? Does the Senate proposal mean that absolutely zero illegal immigration is a precondition for granting legal permanent resident status?

Granted, the recent declines in unauthorized migration are probably driven primarily by the economic downturn. Changes in immigration enforcement likely play a smaller role. But the difficulty of attributing the share of the decline to these two (or other) factors does highlight the challenge of determining whether or not the border is “secure.”

Depending on the standards used to define a “secure border” and, most likely, the political makeup of the commission charged with making such a determination, one possible outcome under the Senate's immigration reform proposal is that millions of currently unauthorized immigrants could end up with a permanent “temporary” legal status rather than a path to citizenship.

Peter Brownell is an associate social scientist at the nonprofit, nonpartisan RAND Corporation.