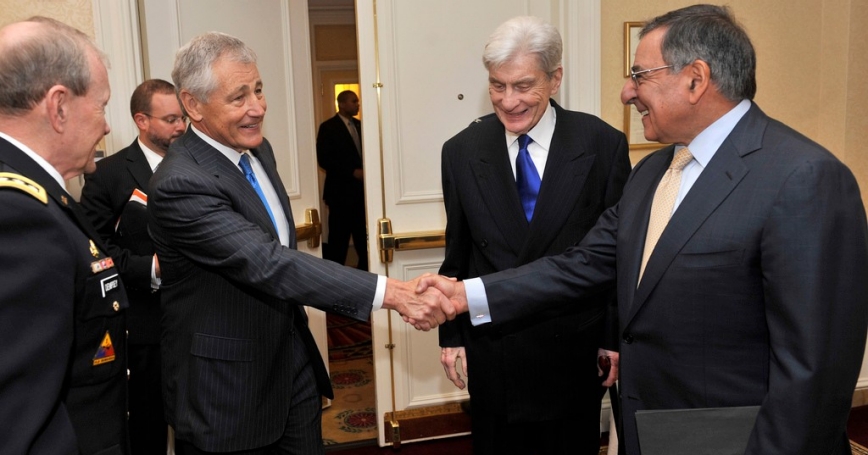 We've heard a great deal about how Washington is reacting to President Obama's nomination of Chuck Hagel as secretary of defense, so perhaps it's worth paying some attention to how Hagel is playing in Tehran.

Some U.S. pundits have warned that Hagel's nomination sends a bad signal to the Iranian regime. After all, Hagel has opposed U.S. sanctions against Iran and called a war against Iran unfeasible. Hagel's critics argue that the simple fact of his nomination telegraphs that the Obama administration isn't serious about using force to stop Iran's nuclear ambitions, undermining U.S. diplomacy and making a military conflict more likely rather than less.

The U.S. Senate will decide Hagel's fate, of course. But it's worth understanding how the Hagel nomination looks to the Iranian leadership.

The Iranian regime is hardly cheering Hagel on, despite what some of his critics say. Yes, Hagel sounds cautious about a U.S. bombing campaign against Iran's nuclear facilities, but such a campaign isn't what keeps the Iranian supreme leader, Ayatollah Ali Khamenei, up at night. An American strike would spur the Iranian public to rally around the flag and buck up a wobbling, wheezing theocracy — and an Israeli strike would do so in spades.

The Iranian leadership's real worry is not American planes but Iranian protesters. Their deepest anxieties revolve around a Persian version of Tahrir Square, a replay of the 2009 Green uprising that wasn't ended by the regime's violent repression. Strange as it may sound, the Islamic Republic is a lot more frightened of the imprisoned Iranian human rights activist Nasrin Sotoudeh than it is of Israeli Prime Minister Benjamin Netanyahu.

As such, Hagel's nomination was greeted in Tehran with a shrug, not a sigh of relief. The Islamic Republic hardly thinks that with Hagel nominated, it's off the nuclear hook. Iran's leaders see U.S. “hostility” as institutionalized and systematized, not produced by partisan politics or individual appointments. As Hossein Salami, a top-ranking Revolutionary Guards officer, said of Hagel, “We view the United States as a political and ideological system driven by its strategic interests rather than by individual politicians.”

That was true even in the transition from George W. Bush to Barack Obama. The Islamic Republic greeted Obama's election in 2008 with mixed emotions. On the one hand, the Iranian regime worried that Obama's barrier-breaking achievement and inspiring life story might appeal to the average Iranian in a way unmatched by any previous U.S. president.

On the other, the Iranian regime continued to believe that its lifelong rivalry with the United States is the result of flatly irreconcilable differences: what it sees as Washington's unshakable opposition to the Iranian revolution, unqualified and limitless support for Israel, and insistence on competing with Iran for influence over the Middle East.

If Obama's election didn't change Tehran's view of U.S. policy, it's hard to see how Hagel's nomination could. After all, America's war-weariness is no secret, and it's hardly limited to Vietnam veterans such as Hagel. Iranian decision-makers can read The New York Times and watch CNN like anyone else, and they understand the reluctance, both among America's people and elites, to go to war against Iran over its nuclear program.

Of course, Iranian leaders won't write off the possibility of military conflict with the world's greatest power, no matter who's running the Pentagon. An Israeli strike on Iran's nuclear facilities, a U.S.-Iranian clash in the Gulf, or sudden Iranian moves toward nuclear weaponization could spark a much larger conflict between the United States and Iran. Tehran has prepared for this contingency the best way it can: by burying and hardening its nuclear facilities, expanding its naval capabilities, and building hundreds of missiles that can hit U.S. military assets in the Middle East.

But the Iranian regime believes that the true threat to its grip on power is not a military conflict but the mounting effect of sanctions and the specter of internal turmoil. Iran's oil minister recently admitted that his country's oil revenues plummeted by 45 percent over the past year. Ordinary Iranians have seen their life savings decimated by the devaluation of the national currency. And Iran's June 2013 presidential election could trigger renewed political infighting and popular unrest.

That's the view from Tehran, and seen through this prism, Hagel's nomination hardly signals weakness to Iran. If anything, careful U.S. consideration of its military options could strengthen the international coalition against Iran, deepen Iran's isolation, and intensify the internal strains that could ultimately doom the regime.

What the Islamic Republic fears most isn't that American officials will be blustery and belligerent. It's that they will be patient and pragmatic.

This commentary originally appeared on NYTimes.com on February 6, 2013. Commentary gives RAND researchers a platform to convey insights based on their professional expertise and often on their peer-reviewed research and analysis.