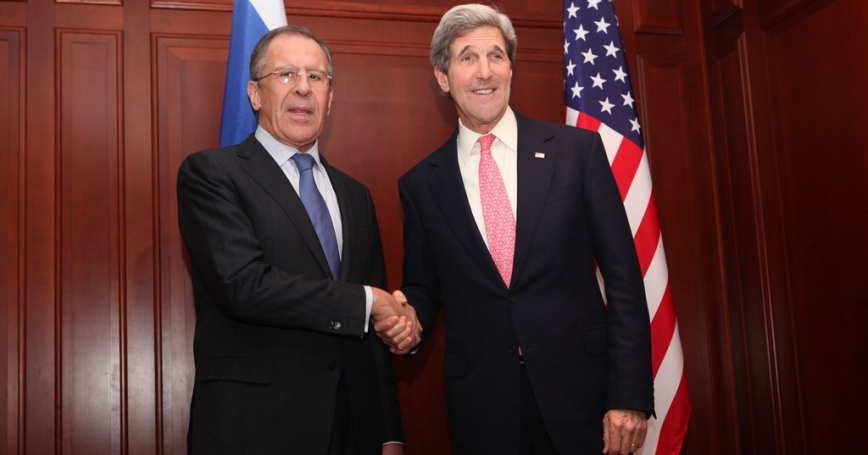 For the sake of Syrian lives, John Kerry's got to play hardball with Moscow.

A brutal, internecine war drags on, pitting a determined dictator against an outgunned opposition. Hundreds of thousands are displaced, flooding into neighboring states. U.N. mediation falters as allies are divided among themselves and with Russia. A U.S. administration, wary of deeper involvement, struggles to formulate policy. And, in the midst of this confusion, a new secretary of state flies off to confer with allies to see what can be done.

Is this John Kerry, now traveling in Europe and soon the Middle East for consultations about Syria, or is it Warren Christopher, who embarked on a similar mission 20 years ago to bring the bloodshed in Bosnia-Herzegovina to an end? The parallels between the two missions are striking—and we should hope that Kerry has learned the lessons from Christopher's tragically failed bid.

In May 1993, Christopher tried to sell America's European allies on “lift and strike”—a plan to end the crisis in Bosnia by lifting the arms embargo on the outgunned Bosnian Muslims while launching airstrikes on Bosnian Serb artillery positions. The plan represented a measured response, but the allies doubted the administration's commitment to its own plan and declined to back it. In the end, the Europeans were right: Washington was still reluctant to risk a messy intervention in Bosnia, dooming Christopher's mission before he took off. When he returned to Washington, “lift and strike” was abandoned in favor of a containment strategy for the Bosnia conflict. It would be two more years and tens of thousands more casualties before the United States finally intervened—but it eventually did.

Kerry faces a similar dilemma on his inaugural trip as secretary of state. Unless he can convince allies like Turkey as well as skeptics like Russia that the United States is serious about altering the trajectory of the conflict, Kerry might as well skip the Syria talking points and focus on other issues. As it is, Kerry is struggling to get key members of the opposition to meet him in Rome on Thursday. After two years of war—the same point at which Christopher failed—America's allies need to know what the Obama administration, now in its second term, is really prepared to do about Syria. Otherwise, the conflict will likely drag on indefinitely. Indeed, in an echo of the war in Bosnia, European foreign ministers last week refused to lift the arms embargo that might have aided the rebel Free Syrian Army. This only freezes into place the Assad regime's substantial military advantage.

Current trends in Syria suggest that Washington will be forced into some kind of action eventually. Every day the Assad regime manages to hang on, however crippled, the risk that it will use chemical weapons out of desperation mounts. Likewise, if the regime falls to radical Sunni Islamists, its chemical arsenal may well end up in radical hands. In either case, the damage to U.S. security and regional influence will be substantial.

The best way out of this quandary is to train and equip opposition fighters—the approach that the outgoing secretaries of state and defense, as well as the former CIA director reportedly backed. Providing weapons—most critically, man-portable air-defense systems (MANPADS) that can neutralize the regime's overwhelming air advantage—to rebel groups on a selective basis would avoid the problem of aiding all groups indiscriminately, as would be the case with a no-fly zone, for example.

Obviously, there will be risks. As in Libya, MANPADs and other weapons could get into the wrong hands. But that risk must be measured against the alternatives. The possibility that Syria will dissolve into a fractured land dominated by radical Sunni Islamists, perhaps confronting a rump Alawite bastion still led by Assad or his cronies, has already raised anxieties and altered calculations around the region. The conflict is also spilling over into Lebanon—Syrian rebels claim to have been attacked by Hezbollah, and are threatening to retaliate against the Shiite militant organization's positions in Lebanon. And if a radical Sunni successor regime in Damascus inspires a return to Sunni-Shiite civil war in Iraq, then Iran is likely to cement its role in charting Iraq's future. Sectarian relations around the region—in Bahrain, Saudi Arabia, and Lebanon—will suffer, raising tensions and injecting additional instability into the equation.

A more moderate replacement for the Assad regime, on the other hand, would represent a blow to Iran and a boon to the United States and its regional partners and allies. Israel would be a primary beneficiary, with its antagonist, Hezbollah, having been dealt a serious setback. This, in turn, could enhance the prospects for peace with the Palestinian Authority.

To protect American interests, the Obama administration need not embark on a daunting, boots-on-the-ground engagement in Syria. However, it is time for the White House to signal clearly that it is ready to reconsider its current position on the crisis.

In his talks with allies, Kerry should seek commitments to alter the current dynamics on the ground in favor of the non-radical, unified opposition. Providing anti-aircraft weapons, training, and intelligence to select opposition fighters would serve this aim, and also provide the United States with much-needed leverage over the often-fractious opposition leadership. Leverage matters now, and will matter equally when the fighting ends and Syria starts trying to rebuild.

Russia is well placed to help achieve these goals. Moscow cannot simply order Assad onto a waiting Russian aircraft, but a shift away from reflexive defense of Syria in the U.N. Security Council would be immediately noticed by Assad, and more importantly, by his coterie, increasing the pressure on them to desert. Further isolation of Assad, coming from one of his primary backers, would also be a boon to opposition morale, fueling the sense that momentum is shifting.

At the moment, Moscow and Washington are moving toward a shared aim for negotiations, in which representatives of Assad would have a role. The opposition is bitterly divided over this issue, and has agreed only begrudgingly to enter talks before Assad steps down. For negotiations to succeed, Assad has to believe that his Russian backers are in fact committed to ending the fighting and could abandon him. Otherwise, Assad will either refuse to participate, or like other dictators who know they have the military advantage, string out bogus talks while the killing goes on.

Unfortunately, Moscow is more content with the status quo than is Washington. So far, the United States has done little other than provide humanitarian and political support to the opposition, while Iran does the heavy lifting on the ground to prop up Assad. Russian obstructionism in the Security Council, meanwhile, combined with arms shipments to, and evacuation flights of Russian citizens from Damascus, help sustain Assad without imposing significant costs on Moscow or exposing it to a loss of prestige if the regime collapses.

Changing the Russian position means changing Moscow's calculus on Syria. And that means presenting the Kremlin with an alternative that it finds more unpalatable than the status quo: a NATO-backed, Turkey-led military coalition invited by the Arab League to intervene in the Syria conflict. If Turkish leaders are as serious about taking action as their recent statements suggest, they should be willing to back such a strategy. In addition to Turkey, this force would be made up of key regional actors, including Saudi Arabia and other Gulf States, Jordan, and Egypt. The coalition would train and equip selective opposition militia, while setting the stage for direct military intervention, such as air strikes aimed at Assad's air force. The United States, France, and Britain would play essential supporting roles through NATO, as the United States did for France and Britain in the NATO phase of the Libya intervention.

Even opening discussions about the formation of such a coalition would be difficult for Moscow to swallow in the wake of NATO's successful intervention in Libya. Russia would be confronted with the prospect of seeing its erstwhile ally ousted with the backing of NATO and without the express backing of the Security Council.

None of this, of course, will be necessary if Russia ups the pressure and isolates Assad. A strong regional coalition, led by Turkey, could later become the basis for a U.N. peacekeeping mission that even includes Russia (as in Bosnia and Kosovo). Such a mission could prevent postwar reprisals and help keep Syria from further disintegration.

In short, Kerry's message to the Russians and to the allies should be the same: Washington is now committed to resolving the crisis and is ready to work with you, but will not allow the conflict to continue indefinitely. As ever, there are no guarantees this approach will succeed. But another secretary of state tried the alternative two decades ago and proved that, when faced with an intractable crisis, consultations without commitment to clear objectives is a recipe for failure. John Kerry will need to do more than simply listen to his counterparts if he wants to avoid the same fate on his crucial first trip abroad.

Christopher S. Chivvis is a senior political scientist at the nonprofit, nonpartisan RAND Corporation. Edward P. Joseph is a senior fellow at the Johns Hopkins School of Advanced International Studies.

This commentary originally appeared on Foreign Policy on February 26, 2013. Commentary gives RAND researchers a platform to convey insights based on their professional expertise and often on their peer-reviewed research and analysis.