Transitioning to a Carbon Tax Credit 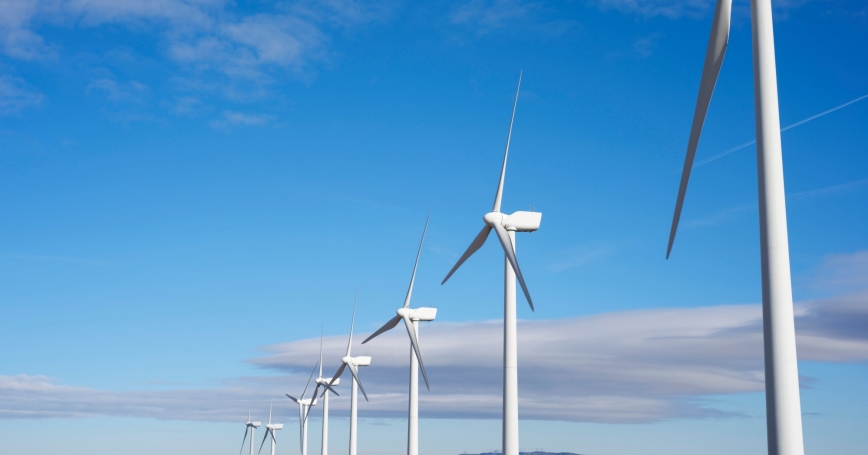 With discussions about climate change and energy policy reemerging in Washington, it's important to remember that in the passage of the last fiscal cliff deal, on New Year's Day, Congress extended one of the most influential policies for wind energy for at least one more year.

The Production Tax Credit, or PTC, provides corporate owners of wind turbines and several other renewable technologies a 2.2-cent tax credit for each kilowatt-hour of electricity they generate for the first 10 years of operation. First enacted in 1992, the PTC has expired several times, resulting in a boom and bust cycle in the industry. With the next PTC expiration on the horizon, we have the opportunity to think about where to go from here.

Proponents of keeping the PTC in place point to both the growth of installed wind capacity and the jobs that come with it. Opponents claim that continuing a subsidy introduced in 1992 is unnecessary. Others favor phasing out the PTC and other subsidies over time (PDF) to encourage the innovations and price declines necessary for a sustainable competitive market.

But let us step back and think about one of the primary reasons for subsidizing renewable energy—reducing greenhouse gas (GHG) and other emissions from electricity. This desired outcome could be the blueprint for an outcomes-based policy that would phase out as the electricity grid gets cleaner.

Instead of setting an arbitrary PTC value, we could provide a tax credit based on the social value of clean electricity generation.

On average, electricity in the U.S. produces about 0.55 kilograms (or 0.00055 metric tons) of GHG emissions per kilowatt-hour (PDF). In 2010, a U.S. interagency working group estimated a range of values for the social cost of GHG emissions (PDF) for use in regulatory analyses. If society were willing to pay $40 (a value toward the higher end of the government estimates) to avoid each metric ton of GHG to avoid climate change damages, then this equates to a carbon tax credit of—what do you know—2.2-cents for each kilowatt-hour of clean electricity generation.

The current PTC has bipartisan support in states benefiting from the manufacture and installation of wind turbines. But big policies with longevity survive with the support of diverse coalitions. If the policy goal is to mitigate GHGs, a carbon tax credit could be expanded beyond renewables to include any new fossil-powered units that capture and store their emitted carbon. Including these technologies would cause objections, but it would also expand the base of support for a long-term, low-carbon energy policy in this country.

Like any considerable policy action, there would be several issues to think through with a carbon tax credit policy. Major challenges would be estimating the actual life cycle GHG emissions avoided (rather than the average [PDF]), adding in the value of reducing non-GHG air pollutants, and the likelihood that the social cost of carbon would increase each year (or could be underestimated), which would diminish the allure of a declining subsidy. Of course putting a sufficient price on emissions directly is another policy option that should be evaluated, possibly in combination with a tax credit, and pricing could provide much needed revenues.

The PTC debate is often framed as choosing between deploying technologies with tax credits or investing in R&D to drive innovation and cost declines. The energy innovation system is integrated and more complex, requiring informed choices and appropriate market incentives along the spectrum of technology advancement.

A coordinated and substantial federal research, development, demonstration and deployment effort is required to drive radical innovation across the portfolio of renewables, energy storage, efficiency, smart grid, carbon capture, advanced nuclear, and other technologies that could enable a low-carbon electricity system. The PTC is but one tool this broader effort.

Moving forward, we should view the federal energy innovation programs as a system to be evaluated and adapted to maximize innovation and market adoption with the limited resources available. But if the primary policy rationale of the current PTC is to encourage clean electricity that displaces emissions that have a social cost, a policy like a carbon tax credit can come pretty close to ensuring we get what we are paying for.

Constantine Samaras is an engineer at the nonprofit, nonpartisan RAND Corporation, and a professor in the Pardee RAND Graduate School. Follow him on Twitter @CostaSamaras.

This commentary originally appeared on The Energy Collective on February 22, 2013. Commentary gives RAND researchers a platform to convey insights based on their professional expertise and often on their peer-reviewed research and analysis.