What to Expect from Obama and Abe's U.S.-Japan Summit 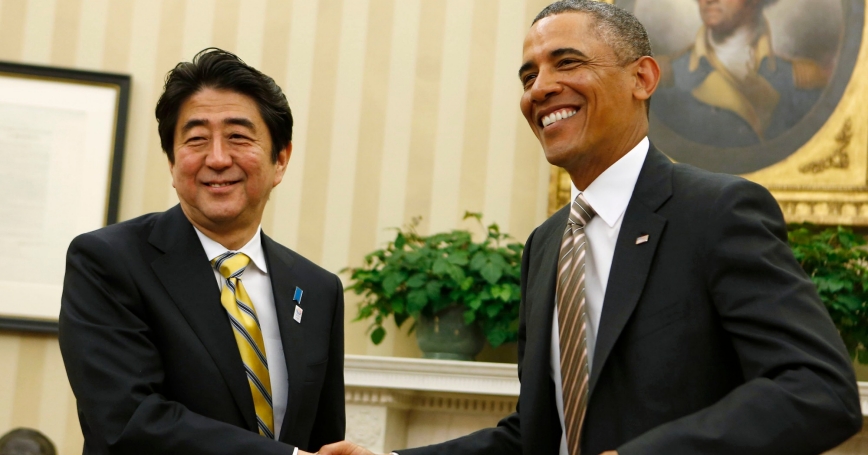 Japanese Prime Minister Shinzo Abe arrives in Washington for a meeting on Friday with President Barack Obama that could define the future of the two countries' relations—and the broader Asia-Pacific region—for years to come.

With Chinese ships intruding into Japanese-administered waters in an attempt to undermine Tokyo's claim to the Senkaku Islands, North Korea testing long-range missiles and nuclear weapons, and the concluding talks on the Trans-Pacific Partnership trade agreement just weeks away, the challenges confronting the two leaders are urgent and strategic in nature.

Obama and Abe will want to gain a feel for each other's personal style, political negotiating room, ability to make firm commitments, and long-term vision for the bilateral relationship and the future of the Asia-Pacific region. To make this meeting successful, Washington and Tokyo will need to gain greater clarity on three broad areas: security, trade, and common values.

The United States and Japan share an interest in discouraging countries like North Korea and Iran from building, proliferating, or weaponizing the world's most dangerous technologies. Similarly, the two sides should coordinate how best to present a common position on cyberespionage and cyberattacks by foreign governments such as China and North Korea.

The two leaders are also likely to discuss how best to dissuade China from pursuing continued confrontation with Japan over islands in the East China Sea. Given reports that official Chinese vessels chased Japanese fishing boats in waters near the Senkakus earlier this week, Obama should reiterate the U.S. determination that Japan's administration of the islands remains unchallenged. Beijing cannot force Japan to the negotiating table through coercion.

Abe is likely to raise his plans for reinterpreting Japan's self-imposed limitations on collective self defense so Tokyo can contribute more to its own and its ally's defense. Obama may want to strongly affirm to the Japanese prime minister that neither the transition in his national security team staff nor the possibility of sequestration will affect the administration's commitment to rebalancing U.S. focus to the Asia-Pacific. Obama could send his new Secretary of State John Kerry to the region as soon as possible to reaffirm his administration's resolve to support this strategic shift in the emphasis of U.S. foreign policy.

Economic issues are a second arena where Obama and Abe will likely try to build common ground, especially over the issues of monetary policy and whether or not Japan will join the Trans-Pacific Partnership talks later this year. While the Group of 20 did not explicitly criticize Japan's inflationary monetary policy, Obama should encourage Abe to avoid spurring a round of competitive quantitative easing that could inflame regional suspicions and beggar-thy-neighbor devaluation spirals.

Abe will face an important leadership moment when he arrives back in Tokyo on Sunday. It is then he will have to declare whether Japan will seize the opportunity to shape an open, rules-based economic order for Asia that will spur growth and encourage investment—or remain immobilized and allow China to define the region's economic architecture through trade agreements that exclude the United States and marginalize Japan. To help Abe out, Obama should make clear that participation in Trans-Pacific Partnership would qualify Japan for priority access to U.S. shale gas exports, which would help small and medium-sized enterprises deal with high energy prices.

The third area that the two leaders will need to talk about is common values and shared visions. Despite starting from very different cultural traditions, the two nations share a common respect for democracy, the rule of law, and human rights. Building an East Asian order that is characterized by recognition and support for such universal human values is in both countries' core national interests. Discussions of climate change and the need to protect the environment constitute another area where the two sides can find common ground.

One reflection of such common principles is the fact that Abe is likely to bring with him the long-overdue good news that Japan will finally sign the Hague Convention on the Civil Aspects of International Child Abduction. Obama should encourage Mr. Abe to move ahead with this as quickly as possible to provide justice and hope to hundreds of separated parents and children.

Internationally, Obama can highlight the two countries' shared support for countries that are moving towards democracy and the rule of law, most notably in Myanmar. Similarly, Tokyo and Washington agree on the importance of supporting a stable and sustainable democracy in Afghanistan as U.S. forces draw down. And the president can express his determination to continue to struggle against al Qaeda in the Islamic Maghreb and its affiliates that abducted and massacred innocent Japanese civilians in Algeria earlier this year.

Finally, Obama should voice appreciation of Abe's decision to downplay history issues to focus on the important task of reviving Japan's economy and improving ties with key neighbors such as South Korea. Japanese voters want to see Abe's economic plans succeed and relations with Japan's regional counterparts improve. Such an outcome would also serve U.S. interests.

To help lock in such important outcomes, Obama should consider inviting Abe to explore rebuilding the personal, educational, and cultural networks between the two great countries. Building and retaining American expertise on Japan, and increasing the exposure of young Japanese to the United States, would enhance the two countries' relationship and the future competitiveness of both.

The meeting could easily be the most important moment of Abe's time in office, and may well set the tone for U.S.-Japan relations for years to come. If it defines a pathway towards a new, more equal defense relationship; establishes an approach that will bind the two economies closer through trade and energy cooperation; and lays out a strategy for promoting a principled vision for the two countries' collaboration on international norms and institutions, it will further enhance the alliance and the value of a close U.S.-Japan relationship to both sides.

This commentary originally appeared on U.S. News & World Report on February 22, 2013. Commentary gives RAND researchers a platform to convey insights based on their professional expertise and often on their peer-reviewed research and analysis.