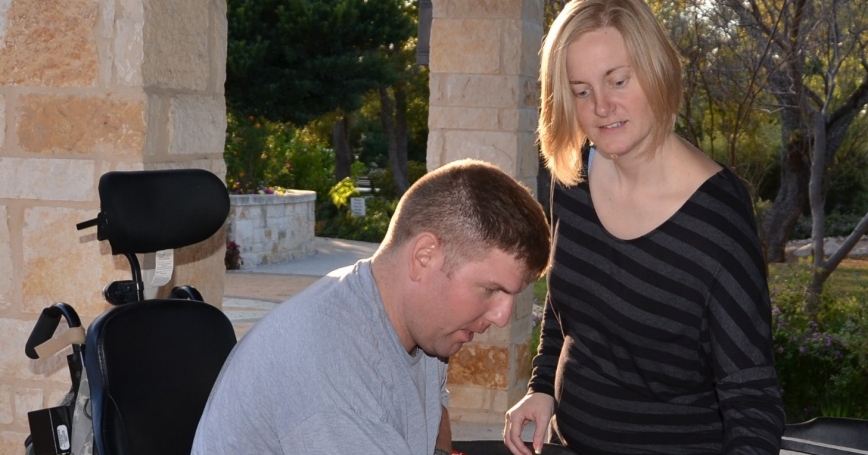 by Terri Tanielian and Rajeev Ramchand

When U.S. soldiers, sailors, airmen and marines in the wars in Iraq and Afghanistan are injured they are given some of the world's best medical attention. As these wounded warriors recover and eventually leave the medical facilities, the responsibility for care and support shifts to spouses, parents, children, and relatives. Little is known about the extent of this support and the identities of these military caregivers.

Military caregivers can be any relative or friend that provides some level of care or assistance to an ill or injured service member or veteran. A survey by the National Alliance for Caregiving (NAC) showed that the overwhelming majority of military caregivers (96 percent) are women. While they may be similar to civilian caregivers in many respects, they differ in significant ways. Civilian caregivers tend to be women caring for elderly parents with dementia and only a quarter live with the person to whom they provide care. Military caregivers are younger women caring for their spouses and most of them live with the person for whom they are caring along with dependent-age children. In these families, children also often share some caregiving responsibilities. Unmarried veterans, meanwhile, often rely upon their parents to provide this care.

“My in-laws have moved in with us to help… [and] with my in-laws there, I can spend time with the kids.”

“I've been told I have symptoms of [a serious illness]. I haven't been to a doctor to follow up. Logistically, I can't figure out when to see the doctor…. My calendar is booked every single day with responsibilities for my veteran.”

The act of caring for a veteran takes a physical, mental, and economic toll on caregivers and their families. Caregivers put the health and well-being of their loved one ahead of their own. One study showed that about two-thirds of civilian caregivers suffered some kind of emotional stress. Others showed a generally higher rate of depression—between 40 and 70 percent—and an incidence of chronic health conditions almost twice that of non-caregivers.

“I was only gone an hour. I felt guilty because I left him. I wasn't there for him. I could have prevented this [outburst].”

Like their counterparts caring for the elderly, military caregivers report feeling obliged to assume the role. Unlike caring for the elderly, comparatively youthful veterans of Iraq and Afghanistan might require care for many decades. Those who have assumed the role often find themselves becoming socially isolated and struggling at work.

“The only ‘me time’ I get is late at night when I can sit on my computer to talk to other caregivers online."

What policy changes can help caregivers? Some changes are already underway—a recent amendment to the Family and Medical Leave Act increases the amount of time family of “covered” service members can take off from work to provide care. Other programs still in their infancy aim to improve the lives of those who assist veterans with the activities of daily living (such as bathing and dressing). These programs, while important, only address the most severe of a potentially very-large population.

What is currently known about caregivers is a starting point, but there are many unknowns. The next steps should be to identify the population of military caregivers and determine how serving in this role affects them in the long term. How do decades of providing care affect a military spouse? What happens when a parent can no longer care for their veteran and perhaps need caregivers themselves? How does caring for a veteran parent affect the health and well-being of the child of a military family? Future RAND research aims to address these questions.

While sacrificing one's personal interest for the greater good is one of the military's proudest traditions, it seems clear this sacrifice extends beyond the warriors themselves. Giving caregivers the skills and resources they need to cope and thrive should be as much a priority as giving veterans medical care.

All quotes are taken from two focus groups led by RAND researchers, and included in the report Military Caregivers: Cornerstones of Support for our Nation's Wounded, Ill, and Injured Veterans.