America's Delicate Dance in the Pacific 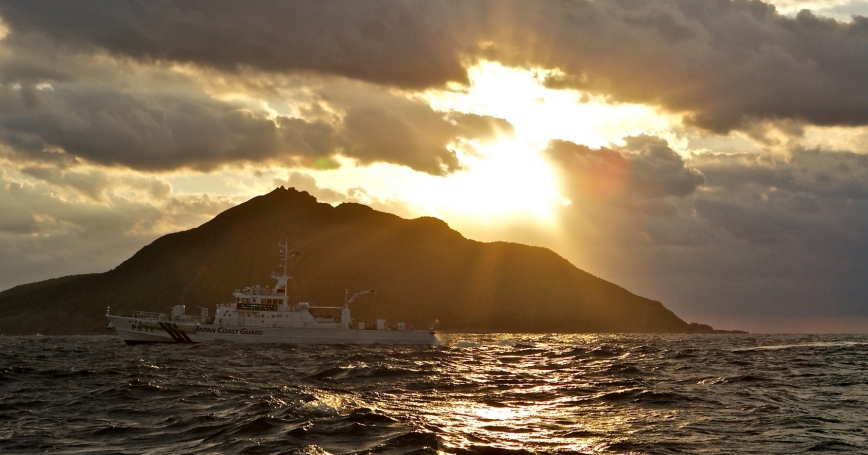 A Japanese Coast Guard patrol vessel passes by Uotsuri, the largest island in the Senkaku/Diaoyu chain.

by David A. Shlapak

For the past several months, the Senkaku islands—known as the Diaoyus in China—have been at the center of tensions between China and Japan. Both sides claim ownership of these uninhabited islets in the East China Sea, and of the potentially resource-rich waters surrounding them.

China, challenging Japan's existing control of the islands, has sent ships and aircraft into the area to confront the Japanese. Each side has scrambled fighter jets in response to the other, and Chinese warships have reportedly locked weapon-targeting radars onto a Japanese helicopter and ship—a subtle but unmistakable ratcheting up of the tension.

The dispute highlights two challenges in East Asia for U.S. policymakers. The first is how to peacefully manage the emergence of a new great power in a region where the United States has been militarily dominant throughout the post-World War II era; the second, how a key U.S. strength in the region—its allies—complicates the first.

East Asia has flourished during six decades of U.S. strategic dominance. The region's powerful economies—Japan, South Korea, Taiwan, Hong Kong, Singapore—prospered under the security blanket of American military power. Even Beijing has benefitted; it is, after all, the U.S. Navy that guarantees the security of the sea lanes upon which China's trade and economy depend.

China's growing power challenges this status quo, and the emergence of new great powers often has been a fraught process. But China's rise need not be traumatic. Look, for example, at the rise of the United States. Less than 100 years after gaining its independence, the young United States and the superpower of the era, Great Britain, had achieved a modus vivendi that left America unchallenged as the dominant power in the Western Hemisphere.

It was ultimately the status quo power that yielded regional preeminence to the upstart, a fact that may be discomforting for an America looking warily across the Pacific at an increasingly powerful China. But unlike Britain, the United States has powerful friends in the region. This is a major and underappreciated advantage for Washington.

The advantage does come with costs, however. First, the web of U.S. alliances in East Asia has supported a Chinese narrative that the United States is seeking to contain Beijing, to keep it weak and helpless. Warming American relations with countries like Vietnam and India are, according to China's perspective, the newest components of Washington's encirclement strategy.

This point of view is not entirely unreasonable. Imagine if the situation were reversed: China is closely allied with and has powerful military forces based in Canada, sails mighty combat fleets in the Gulf of Mexico, and flies spy planes up and down the East and West Coasts. All of Beijing's protestations of goodwill and benevolent intentions certainly would be heard with a skeptical American ear.

A second cost of America's Asian alliances is that they risk drawing the U.S. into conflicts that are important to its allies, but are not critical to its own interests, like Japanese control of the Senkaku/Diaoyus islands. America's friends and allies in the region are watching carefully, gauging Washington's willingness to support them should they come into conflict with a powerful China.

So far, the U.S. has done well to reaffirm its commitment to Japan's security while urging both sides to lower the temperature of the dispute. Still, even if the two nations ease the tensions, the United States should gird itself for further uncomfortable contingencies in the coming years.

Today's crisis in the East China Sea is worrisome, and could get worse, but it won't be the last of its kind. The relationship between the United States and China is uniquely complex, a messy combination of deep economic interdependence and perhaps inevitable strategic rivalry. Managing this contradiction will be this generation's primary foreign policy challenge. It will not be easy.

David A. Shlapak is a senior international policy analyst at the nonprofit, nonpartisan RAND Corporation.

This commentary originally appeared in U.S. News & World Report on March 28, 2013. Commentary gives RAND researchers a platform to convey insights based on their professional expertise and often on their peer-reviewed research and analysis.