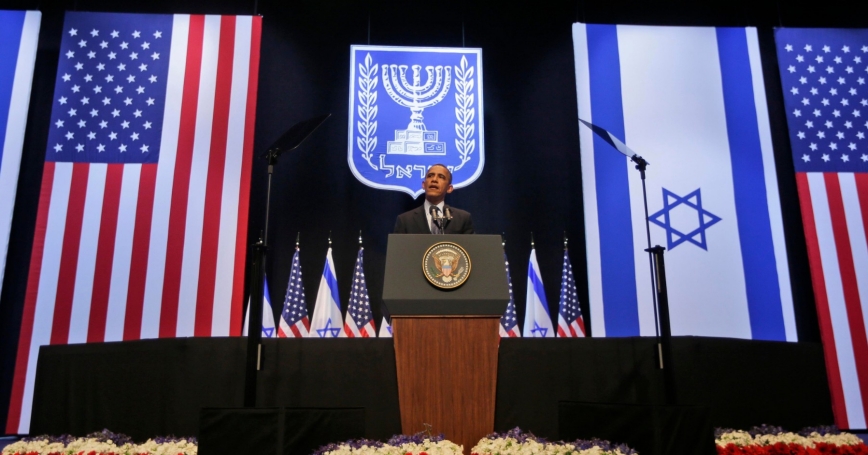 Obama shows Netanyahu and Abbas—and their people—how it's done.

For all the drama of President Obama's stirring speech Thursday in Jerusalem, the most encouraging thing about it may have been the applause from the audience. “Remarks of President Obama to the People of Israel,” the White House called the speech—and, like President Reagan, Obama went soaring over the heads of officials, elites, and pundits, directly to Israel's citizenry. In that may lie the nub of a second-term approach to Israeli-Palestinian peacemaking that could prove more fruitful than the frustrations of the first.

Conventional wisdom holds that the Israeli-Palestinian conflict is not ripe for resolution—that Obama should hold back, take the lessons from his failure to spur sustained and constructive peace talks between Israelis and Palestinians, and turn to less painful topics. This is more conventional than wise. Most of the Israeli and Palestinian publics support a two-state solution—and such a solution is the only viable way out of the conflict ever proposed, going back to the Peel Commission that first recommended partition back in 1937. Benjamin Netanyahu will go down in history as the first Likud prime minister to call for a Palestinian state alongside Israel, thereby irrevocably accelerating Israel's decades-long abandonment of the dream of annexing the biblical heartland of the West Bank. And Palestinian President Mahmoud Abbas and his technocratic prime minister, Salam Fayyad, represent a pragmatic Palestinian leadership that, for all its flaws, has done vastly more to build up the institutions of a future Palestinian state than Yasir Arafat's terrorism and evasions ever did. The United States and Israel are trying to navigate the region's most urgent challenges: Iran's nuclear ambitions, the Assad regime's assault on its own people, and the aftershocks of the 2011 Arab revolutions. The ongoing Israeli-Palestinian conflict offers cheap opportunities for demagogues, extremists, terrorists, and nihilists to exploit.

Much of the early reaction to Obama's speech sprinted to consider modalities and mechanisms—calling for U.S.-imposed grand designs or fretting about which structure the administration should set up at the State Department. There's time aplenty to get into the weeds. But the president's speech was aimed higher. Obama's approach was not tactical but tectonic, aimed at building sociopolitical momentum behind the forces of a negotiated partition. So long as Netanyahu and Abbas spend their political lives looking over their right shoulders rather than their left, the temptations of stasis will always prove more seductive than the uncertainties of movement. So long as Israeli and Palestinian leaders talk only to their own bases rather than to the other side's public, the comforts of things as they are will always nose ahead of the challenges of things as they could be.

Obama showed them how it's done, with eloquence, empathy, and persuasion. In a spirit of enduring friendship, he did some truth-telling of a sort that the Israeli public does not always get from its leadership—and his youthful audience roared its approval at a volume that could be heard loud and clear in Ramallah, Nablus, and Gaza City. Obama was both warm and strong, wise and supportive, reiterating yet again that the United States will take no options off the table on Iran even while he reminded Israelis that they and the Palestinians have no options on the table besides a two-state solution or unending occupation, terrorism, and muted and mounting rage.

The president is right: The status quo is not static. The lingering conflict carries ongoing risks to Israeli security. Iran is straining against unprecedented international pressure. Hamas oppresses and impoverishes the suffering people of Gaza. Hezbollah stocks its bristling rocket arsenal to bombard Tel Aviv and Haifa. Settlement expansion is convincing more and more Palestinians that Israel prefers indefinite occupation to preserving its identity as a Jewish democracy. Islamists and jihadists around the region use the enduring conflict as a cudgel to cow voices of moderation and liberalism. And Israel is having its political legitimacy clawed away in international forums, despite the gallant efforts of the Obama administration.

Warren Bass is a senior political scientist at the RAND Corporation and the author of Support Any Friend: Kennedy's Middle East and the Making of the U.S.-Israel Alliance. He previously served as director of speechwriting and senior policy adviser to U.N. Ambassador Susan E. Rice.

This commentary originally appeared on Foreign Policy on March 22, 2013. Commentary gives RAND researchers a platform to convey insights based on their professional expertise and often on their peer-reviewed research and analysis.