Iran's Elections to End All Elections 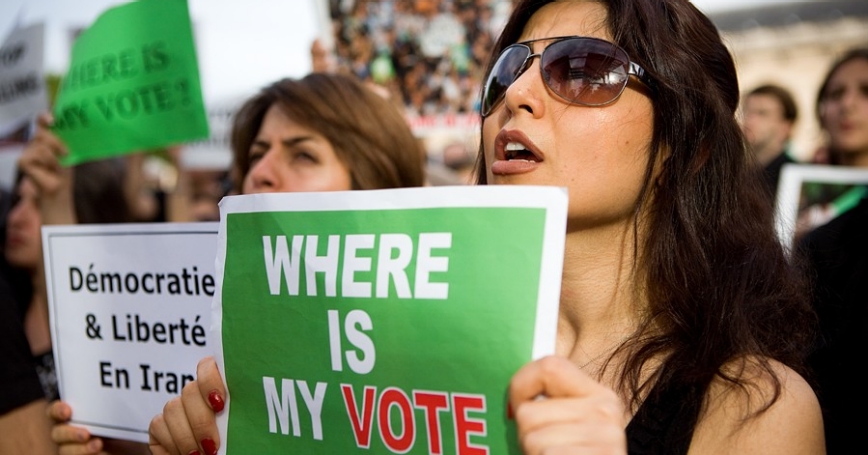 Iranians living in France protested the 2009 the reelection of Ahmadinejad and the irregularities in the vote count for his opponent, the reformist Moussavi

Iran's presidential campaign is well under way. The unprecedented public attack by President Mahmoud Ahmadinejad against Speaker of Parliament Ali Larijani, in which Ahmadinejad accused Larijani of trying to control Iran through a family-run mafia, attests to a deep divide within the Iranian regime. But unlike in most real democracies, the likely contenders for the presidency are not trying to woo reluctant voters with snazzy TV ads or get-out-the-vote drives. Indeed, many regime officials would prefer that many Iranians—especially liberal urbanites—not vote at all.

The June election will not be about mobilizing the Iranian public. It is instead the culmination of a years-long evolution in Iranian politics: the transformation of the Islamic Republic from a mildly representative theocracy into a Revolutionary Guards-controlled kleptocracy. Ultimately, the election is meant to fulfill Supreme Leader Ayatollah Ali Khamenei's ambition of wielding absolute authority. But far from strengthening his rule, the election could actually erode the credibility and legitimacy of a fading regime.

Elections in Iran have never been a truly democratic affair. Sure, Iranians have had the opportunity to vote for president and parliament every four years. But the elections have always been held within the accepted “framework” of the Islamic Republic. Only candidates who adhere to the Islamic theocracy are allowed to run.

The 12-member Guardian Council, controlled by the Supreme Leader, has the authority to disqualify any candidate it deems anti-Islamic or counter-revolutionary. The existence of a body like the Guardian Council is a major impediment to democracy. Imagine if a similar group in the United States had banned Barack Obama or Mitt Romney from running for being “un-American.”

But for a while, Iranian elections allowed for some variety within the established framework. President Ali Akbar Hashemi Rafsanjani (1989-1997) was more conservative than President Mohammad Khatami (1997-2005); nevertheless, both of them pursued relatively moderate policies. The provocative, populist, and messianic Mahmoud Ahmadinejad has been unlike any other president, but at least he depicted his 2005 campaign as a drive against Iran's corrupt and avaricious elite. Rafsanjani was often accused of leading the country's “mafia” at that time.

However, Khamenei has never had the stomach for electoral politics. Once a relatively weak president (1981-1989), the now powerful Supreme Leader resents having to compete with any elected official. After all, the Iranian constitution specifies the Supreme Leader as Iran's ultimate political and religious authority. Khamenei's authority is supposedly divine. According to some of his followers, his 1989 selection as Supreme Leader was an act of God rather than the perfunctory proceedings of the clerical Experts Assembly.

Khamenei also has a long memory. He owes his selection as Supreme Leader to Rafsanjani, who was the head of the Experts Assembly and Iran's most powerful leader after the death of Ayatollah Khomeini. But as president, Rafsanjani attempted to impose his own political and economic agenda on Khamenei. The next president, Khatami, went even further by explicitly challenging the political status quo. The reformist president's support for civil society, nongovernmental groups, ethnic minorities, and even women's rights violated everything Khamenei believed in.

Khamenei apparently thought Ahmadinejad would be a loyal servant. The Revolutionary Guards were mobilized to ensure his election in 2005 and again in 2009. But even Ahmadinejad, who could not have been elected without Khamenei's support, turned out to be an ungrateful thorn in his side.

The president has challenged his superior consistently and vigorously. One can assume that Ahmadinejad is overconfident, but perhaps he knows that Khamenei's authority is on the wane. Ahmadinejad's accusation against Larijani—a Khamenei loyalist and potential presidential candidate—is a direct insult to Khamenei, who has repeatedly asked regime officials to refrain from publicizing their political disputes. But no one seems to listen.

The Guardian Council will most likely disqualify anyone associated with Rafsanjani, Khatami, and Ahmadinejad before the June election. The Revolutionary Guards, which has become immensely wealthy and powerful under Khamenei, has also staked a role in supervising the elections. Ali Saeedi, Khamenei's representative to the Guards, has even promised that the Guards will “rationally and logically engineer the elections.” At least he is honest.

Khamenei does not want so much a president as an obedient prime minister who will enforce his dictates. He has even pondered getting rid of the presidential system in previous speeches. Western analysts and Iran watchers should forget about voter turnout or whether the next president will have an impact on nuclear negotiators. The Iran of today has one effective ruler, backed by a powerful military and security establishment.

Iran's last Shah, Mohammad Reza Pahlavi, also believed in having the last word on all state matters. He frequently ignored his prime ministers or replaced them when necessary. He created Rastakhiz, an ostensible political party without any real power or authority. This was all meant to convince Iranians that they had a choice in determining their destiny. But the Shah did not recognize reality. When finally challenged by the people, the SAVAK (his fearsome intelligence agency), the Artesh (his formidable military), and the wealthy and supposedly loyal elite all abandoned him.

The world awaits a peaceful resolution to the Iranian nuclear crisis. Absent a negotiated settlement, a war that could ensnare the United States, Israel, and millions of innocent Iranians is a real possibility. But we should remember that this story may have another ending. The June election could be yet another sign that the Islamic Republic—like its predecessor, the Pahlavi dynasty—is but a house of cards that may scatter to the wind.

This commentary originally appeared in U.S. News & World Report on March 6, 2013. Commentary gives RAND researchers a platform to convey insights based on their professional expertise and often on their peer-reviewed research and analysis.