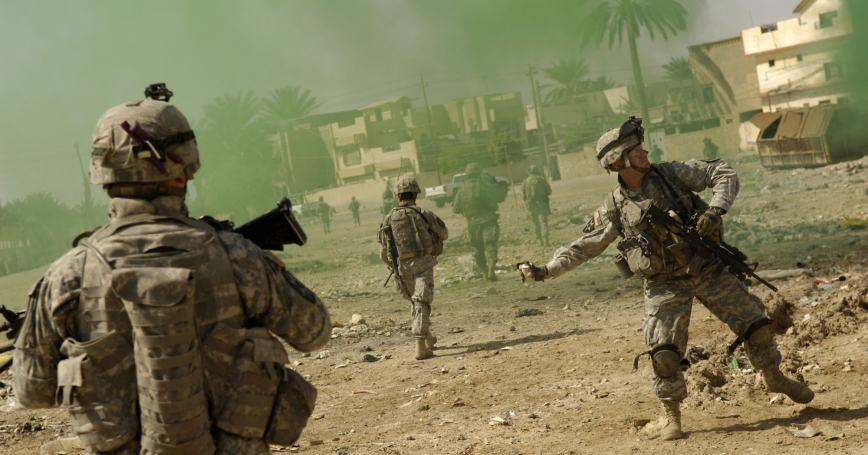 U.S. Army sergeant throws a smoke grenade to mask his team's movements during a joint operation with the Iraqi police

“Never Again” is the wrong lesson to draw from the Iraq war.

The war in Iraq is regarded by most Americans as a costly mistake. This does not mean the experience was without value. Indeed, one can profit from mistakes even more than successes in terms of improved performance. Ten years on, it is worth asking whether we as a nation have done so.

Last year, at the direction of Gen. Martin Dempsey, the Joint Staff issued a short but fairly candid compendium of lessons from the Iraq and Afghan wars. Entitled “Decade of War,” this paper acknowledged that the United States had failed to understand the environments in which it was operating, employed conventional tactics to fight unconventional wars, and was unable to effectively communicate with local populations. The report contends that these problems were largely overcome in the last five years, but admits that this adaptation took longer than it should have.

This otherwise commendable examination of past failures omits two of the most important. Invading Iraq on the basis of bad information was not exclusively or even primarily a military error, but much of the U.S. intelligence apparatus resides in the Defense Department and is commanded by military officers. Yet only the tiny State Department intelligence unit demurred from the judgment that Saddam had active WMD programs and indeed weapons, neither of which turned out to be true.

Second, this Joint Staff compendium does not examine the fatal mismatch between the scale of initial American commitments in Iraq and Afghanistan and the scope of its ambitions. Some now argue that initial American objectives were too ambitious, while others insist that the commitment of military manpower and economic assistance was inadequate. But virtually everyone agrees that the Bush administration should have either scaled down the former or upped the latter. In the end, of course, it did both.

Civilian agencies—to include State, USAID, Treasury, and the CIA—have not produced a lessons-learned compendium comparable to that issued at Gen. Dempsey's direction. This is unfortunate, for while the Joint Staff paper does cite failures on the civil side, we lack any comparable analysis of such failures from the responsible agencies.

The lesson most Americans seem to have drawn from Iraq is “never fight a land war in Asia.” This advice was first given by Douglas MacArthur to President Kennedy in 1961. It was reiterated two years ago by then Secretary of Defense Bob Gates. Another version of this lesson is contained in the Obama administration's official defense guidance, which directs that the United States no longer size its military for large-scale stability operations.

While negative lessons are legitimate and useful, they don't lead to improved performance, since one does not hone skills one does not intend to use. The post-Vietnam “never again” attitude led to a severe atrophy of the U.S. military's counterinsurgency skills and it is quite possible that the U.S. military will go through a similar phase of unlearning over the next several years.

Obviously, the United States should in the future avoid invading large hostile Asian states on the basis of bad information against the advice of major allies and over the objections of most regional governments. History suggests, however, that the more general injunction against land wars in Asia may enjoy a short half-life, as may the determination to steer clear of large-scale stability operations. Kennedy escalated the U.S. commitment to South Vietnam in the years following MacArthur's warning. George W. Bush ordered the invasion of Afghanistan only a year after promising, in a presidential election debate with Al Gore, not to engage U.S. forces in any more nation-building endeavors—and he then directed the occupation of Iraq only 18 months later.

The current national aversion to future such engagements is clearly limiting American involvement in Syria's still escalating civil war, much as the hangover from President Clinton's Somalia debacle in 1992 helped delay American intervention in the Bosnia civil war until 1995, by which time that conflict had claimed over 100,000 victims. This is a threshold the Syrian conflict seems likely to cross sometime this year.

More important even than identifying lessons to be learned is adopting enduring remedial measures. “Decade of War” is right to argue that most of the early failures it identifies have been corrected. But many of those fixes have been of a provisional nature, altering institutional behavior and structures in ways not likely or even intended to endure once the immediate need for reform diminishes. As the war in Iraq recedes and that in Afghanistan winds down, there will be a tendency for all our national security agencies to return to business as usual. Should this be allowed to happen, the nation will have missed an opportunity to profit from some very costly mistakes.

This commentary originally appeared in Foreign Policy on March 13, 2013. Commentary gives RAND researchers a platform to convey insights based on their professional expertise and often on their peer-reviewed research and analysis.