The Deeply Mixed Results of the Iraq War 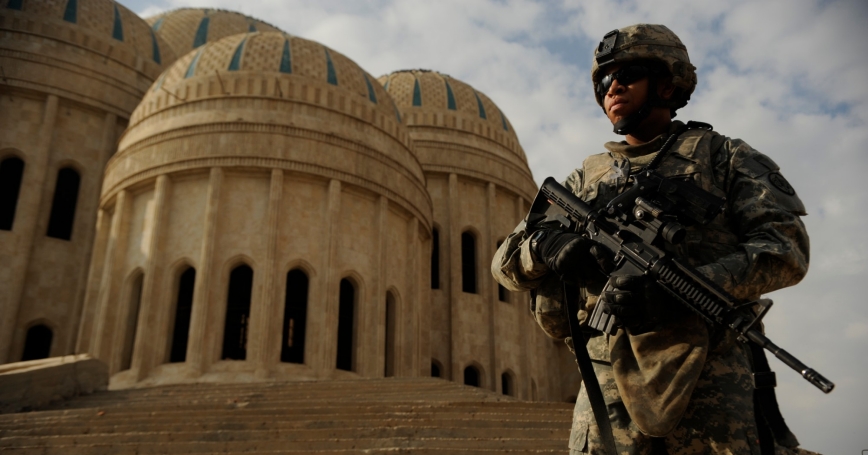 A U.S. soldier stands guard outside a mosque in Iraq in 2008

In 2003 the United States and its allies invaded Iraq. Ten years later it seems appropriate to ask a bottom-line question: Did the U.S. succeed? Anyone who has followed the Iraq War knows that this simple question is so freighted with political, social and even personal baggage that any response is likely to be dismissed out of hand. Yet in 2013 there is perhaps enough distance from the most emotional period of debate to begin thinking seriously about how the Iraq War will fit in the pantheon of American military history.

In cold technical terms it makes the most sense to assess the war by the objectives outlined at its outset. Officially the U.S. entered Iraq to remove the threat of Iraq's weapons of mass destruction and to address the presumed al-Qaida presence there. We soon discovered that Saddam Hussein had no real WMD capability, but he did retain the capacity to restart his program in the future. By invading, defeating the Iraqi Army, and forcing the collapse of the entire state, the U.S. unequivocally removed the capacity of the Iraqi state to use or develop WMD. Technically, this is a success. On the other hand, al-Qaida was not defeated in Iraq, and in fact grew more powerful over the ensuing three years by feeding off the U.S. presence. The group that is generally known as al-Qaida in Iraq, or AQI, still exists. While AQI was greatly weakened between 2006 and 2012, the group and its affiliates are now associated with the resistance in Syria, where it threatens to transform the popular revolt into a radical Sunni Islamist battlefield. Technically, this is a failure.

Of course this technical assessment removes the war from meaningful context. Within a year of the invasion, Iraq slipped into violent social unrest and began to suffer from a multifaceted insurgency. Plans to quickly depart Iraq disintegrated and U.S. forces were pulled into a full-scale counterinsurgency war. By November of 2005 the U.S. had dramatically altered the mission in Iraq to incorporate nation building. President Bush set out rather clear terms for victory in the 2005 National Strategy for Victory: Iraq would become a peaceful, united, stable, and secure country with a constitutionally elected government. This strategy also envisioned an Iraq that was “well integrated into the international community, and a full partner in the global war on terrorism.” These standards essentially remained in place for the remainder of the war.

By the standards set in Bush's strategy, the Iraq war was at best a tenuous, qualified success. Iraq is not in open conflict with its neighbors, but terrorism and limited insurgency continue across the country. Iraq is united under a constitutional government for now, but some view Kurdish or even Sunni secession as inevitable. Compared to conditions in Syria—admittedly a low standard—Iraq is stable, but it is in a state of metastability. In other words, it bears many of the hallmarks of a potentially unstable state, to include shaky government institutions, social, political, and economic inequality, ethnic and sectarian friction, and the abuse of minorities. Iraq is more accepted as a regional and global actor now than under the Hussein regime, but it is still regarded with suspicion by its closest neighbors. And while Iraq has a cooperative relationship with the U.S., it is and probably never will be a meaningful partner in the U.S. effort to defeat global terror networks.

It is best to view Iraq as two separate wars. The U.S. clearly defeated the Iraqi military in 2003, and in a somewhat convoluted interpretation of its stated intent the U.S. achieved one objective: the removal of the potential, long-term threat of WMD. Al-Qaida affiliates still exist in Iraq but have not conducted operations against the U.S. homeland from Iraqi soil. In that sense, the U.S. can claim a thin, qualified victory for the first Iraq war, even though the absence of WMD, the total collapse of the Iraqi state, and the ensuing insurgency made that victory bittersweet and of questionable strategic value.

The U.S. came very close to losing the Iraq war of 2003–2011. The surprising strength, brutality, and effectiveness of the Iraqi insurgency nearly shattered the U.S. national will, and by 2006 it was on the verge of withdrawal in ignominy. But by surging, and supporting an Iraqi grass roots movement to defeat the most vicious insurgents—and most importantly, by not submitting to the failure envisioned by so many elected leaders—the U.S. was able to salvage a qualified victory.

Ultimately, the U.S. was able to give the Iraqis the basic necessities for a stable state, though it maintains little control over what happens there next. But, as former Ambassador to Afghanistan Ronald Neuman once noted in a debate over war termination, “At some point, it all just becomes politics.”

Ben Connable is an international policy analyst at the nonprofit, nonpartisan RAND Corporation. He served three tours in Iraq from 2003-2006 as an intelligence officer and cultural adviser, and analyzed the Iraq war as an intelligence desk officer. Ben is a co-author of a forthcoming RAND study on the U.S. withdrawal from Iraq.

This commentary originally appeared in U.S. News & World Report on March 21, 2013. Commentary gives RAND researchers a platform to convey insights based on their professional expertise and often on their peer-reviewed research and analysis.