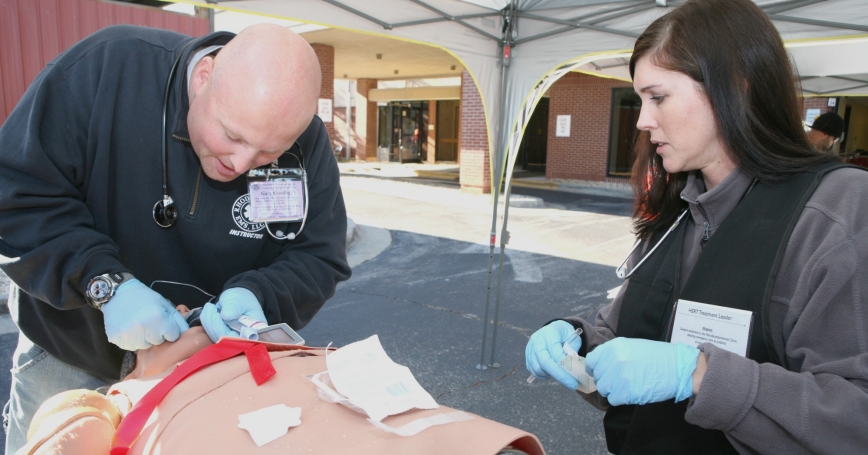 Public health practitioners most often work behind the scenes to keep bad things from happening. They conduct inspections to ensure that restaurants are safe places for people to eat. They provide immunizations to prevent people from getting diseases. They help ensure safe water and sanitation. They educate people about healthy lifestyle choices regarding diet and exercise. They collect and analyze surveillance data to detect and monitor potential health problems.

But bad things do happen, and when they do, public health practitioners are also there. Disasters, including Superstorm Sandy on the Atlantic coast; tornadoes in Alabama and Missouri; earthquakes in Haiti, New Zealand, Chile, and northern Japan; the 2009 H1N1 influenza pandemic; and the post-9/11 anthrax attacks have taught us that public health is not just about prevention. It is also about preparedness, response, and recovery. Public health practitioners are the front line force for national health security, ensuring that communities are prepared for, protected from, and resilient in the face of, a full range of health threats or incidents with potentially negative health consequences.

Take the recent tuberculosis outbreak in Los Angeles. Health workers quickly identified about 4,650 people in downtown LA's skid row who may have been exposed to TB. Attempts are now under way to control the spread of the disease.

While there has been an overall decrease in the appearance of new TB cases among LA County residents, cases have been increasing among homeless populations. Earlier this year, the LA County Health Department issued new guidelines for homeless shelters on how to screen and identify patients at risk of tuberculosis. According to an LA Times article: “The guidelines urge shelters to appoint TB liaisons and to create a 'cough alert' log for tracking patients with persistent coughs. The county also recommended that shelters determine whether incoming clients have been screened and refer those who haven't to health providers.” The health department has also asked shelters for information about everybody who has used their services so that it can take appropriate steps to prevent and control the spread.

Yet despite the prevalence and frequency of such natural health threats, funding for more rare incidents, namely bioterrorism, has increased dramatically since 2001. At the same time, budget cuts to state and local health departments continue to threaten their ability to prepare for and respond to emergencies, not to mention providing the basic services on which people depend. In a December 2012 article in Health Affairs, my RAND colleagues and I revealed that the U.S. government's portfolio of health security research is weighted toward bioterrorism and emerging biological threats, laboratory methods, and development of biological countermeasures for intentional disease threats, and not as much toward the more frequent natural—though no less dangerous from a public-health perspective—threats that occur in the United States.

As just this sort of natural threat, the TB outbreak in Los Angeles serves as a very real reminder that while bioterrorism is a potential threat, as well as a psychically harrowing possibility, it isn't the only threat our country faces in the health security realm. Naturally occurring disease outbreaks happen every day. Public health practitioners use routine capabilities such as outbreak detection, laboratory diagnosis, epidemiological investigation, and disease control measures on a daily basis. They draw upon these same “bread and butter” capabilities in larger emergency situations as well. This is why such capabilities must continue to be a priority.

In this fiscally uncertain climate, we should continue to leverage the dual-use benefit of bioterrorism investments by building and maintaining those routine (but essential) public health capabilities that can also be used in response to a variety of public health emergencies—be they disease outbreaks, weather-related incidents, or even bioterrorism incidents.

Shoshana Shelton is a project associate at the nonprofit, nonpartisan RAND Corporation.