Unlearning the Lessons of Iraq 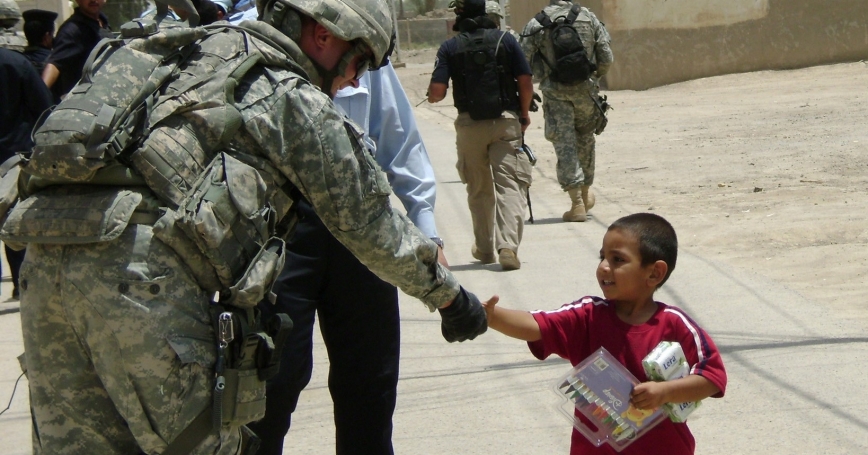 This month marks the 10th anniversary of the start of the Iraq War, one of the most important events of the early 21st century. In nearly a decade of war, the United States learned painful lessons about the challenges of nation-building, the extraordinary costs intervention can incur, and the pros and cons of large scale deployments of boots on the ground, to name a few.

But how strictly do those lessons apply to other cases?

Should Iraq's tortured postwar path discourage efforts to help stabilize postrevolution Libya? Should the staggering costs of the boots-on-the-ground deployment in Iraq keep the U.S. from lending a more active hand to rebels in Syria? Should the United States forgo acting in Syria without a U.N. Security Council resolution?

Perhaps not. As new conflicts demand its attention, the U.S. may in fact need to unlearn—or at least nuance its understanding of—the lessons of Iraq.

In Libya two years ago, the U.S. started out by successfully applying some of Iraq's lessons: It intervened from afar, leveraged local partners, eschewed large numbers of boots on the ground, minimized the U.S. role, forced NATO allies to bear as much of the burden as possible, and, above all, ensured the operation had the legitimacy of a U.N. Security Council resolution and broad regional support. The result was a relatively low-cost intervention that accomplished its immediate goals in a matter of months.

But in the aftermath of Qaddafi's death, Iraq's lessons loomed too large in the strategy of the U.S. and its allies. A reflexive fear of boots on the ground, pessimism about the very concept of nation building, and an excessive emphasis on keeping the international presence to a minimum has left Libya in a precarious place.

To be sure, the last thing that Libya needs now is to be placed under the suzerainty of the international community much less an Iraq-type occupation involving foreign troops. But trepidation about boots-on-the-ground engagement has unnecessarily forestalled even small-scale efforts to repair Libya's fractured security environment, putting at risk the gains won in the intervention itself. The U.S. and its allies risk turning the sound principle of local ownership in Libya into a dangerous policy of strict laissez-faire.

Meanwhile, in Syria, the over-learned lessons of Iraq are taking an even more serious toll. The U.N. Security Council has repeatedly failed to agree on a strategy to end the crisis and the U.S. has been unwilling to act without it. Going to war in Iraq without the sanction of the Security Council increased the costs and difficulty of postconflict stabilization efforts. But does that mean the U.S. should wait to intervene in Syria, where a crisis is already underway, tens of thousands have already died, and a region of strategic importance is destabilizing?

Looming large over both these cases is the dreaded cost—human and financial—of yet another entanglement, yet another war and the prospect of more American casualties. As Washington reels from the impact of sequestration on its already troubled budget process, the financial costs of the Iraq War are fresh in the minds of policymakers.

But at the same time, the U.S. cannot wish the crises of a globalized world into nonexistence. As long as it maintains precedence in world affairs, the U.S. will be called upon to help resolve crises like those in Libya and Syria. This will require applying the lessons of Iraq thoughtfully along with the lessons of other cases—older as well as more recent—in order to shape military interventions that serve U.S. national security needs and fulfill international responsibilities without breaking the bank.

This is obviously no easy task. There are no simple formulas or maxims to guide policymakers through the uncertain waters they must navigate. Only the careful study of the past can provide insight necessary to make sound decisions in the future. That study must include the full history of the Iraq War, with its real lessons in proper context and perspective.

It would be a perverse outcome of so difficult an experience, however, if the U.S. failed to make prudent use of its Iraq lessons and ended up making the same mistakes—or similar ones—again.

Christopher Chivvis is a senior political scientist at the nonprofit, nonpartisan RAND Corporation and author of "Toppling Qaddafi," a forthcoming book on NATO's intervention in Libya.

This commentary originally appeared in U.S. News & World Report on March 14, 2013. Commentary gives RAND researchers a platform to convey insights based on their professional expertise and often on their peer-reviewed research and analysis.