Forget What You Think You Know 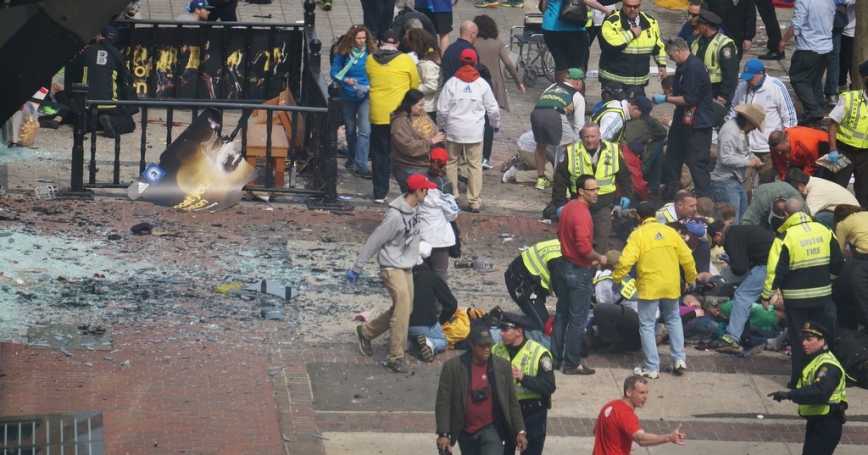 When I heard about the Boston bombings, my heart sank — but I also felt some part of my mind slip into battle mode. From past episodes, such as the attempted bombing of a Northwest Airlines flight on Christmas Day in 2009, I can picture the way that my former colleagues at the National Counterterrorism Center, the CIA, the FBI, and many more are now rushing into action, moving swiftly and skillfully to sift the intelligence wheat from the collection chaff, pushing their own emotions aside or using them to fuel their efforts.

Once upon a time, our first impulse would have been to blame al Qaeda. But soon after the attack, several respected experts suggested that the bombing smelled more like domestic terrorism, pointing to a venue of vast local significance, the timing, and the relatively low-tech pressure-cooker explosives. They may well be right — and the FBI's announcement Thursday that it is looking for two men seen in photos and video footage before the attack means that we could soon know far more. Even so, the out-of-the-gates lean toward ascribing the Boston bombings to domestic terrorists seems to have been based not just on the fragmentary evidence at hand, but also on the conviction that the attack just didn't resemble what we think of when we imagine an al Qaeda attack. That image is no longer accurate — it's based on what the group once was, not what's left of it today.

Years ago, when my former colleagues and I spoke about a “typical” al Qaeda assault, we all knew what we were describing. We meant a plot that was centrally coordinated, well planned, and carefully scoped out; a plot that was technically advanced, perhaps involving innovative technology; a plot that had an identified and ambitious goal — one that would have made the planners of 9/11 proud. These are the plots described in the documents that SEAL Team Six found in Abbottabad with Osama bin Laden — big, spectacular attacks that had massive economic consequences, such as hijacking oil tankers, attacking multiple aircraft over the Atlantic, targeting financial institutions, killing hundreds or even thousands of people. The al Qaeda of old — and, almost certainly, bin Laden himself — would probably have scoffed at the scale, the simplicity, the randomness, and the seeming lack of political purpose behind the bombings in Boston.

The United States has eliminated generations of al Qaeda's leadership, forced it out of one safe haven in Afghanistan, hammered it in another haven inside Pakistan, and driven the organization to decentralize itself. These successes have made it virtually impossible to accurately describe anymore what we mean by “an al Qaeda attack.” These changes mean my former colleagues in the counterterrorism world must consider a limitless universe of potential al Qaeda attacks and tactics, with a scattered and shadowy leadership structure to monitor.

The fact that we're dealing today with a diversified, decentralized, and diminished al Qaeda core is both good news and bad: Good news because al Qaeda seemingly has been forced to resort to smaller, simpler, and less spectacular attacks — but bad news because such plots are far more difficult to penetrate and prevent than the types of grand, theatrical attacks that bin Laden dreamed of from his lair in Abbottabad. We've been enormously successful in preventing al Qaeda attacks, but if Boston does, in the end, turn out to have been conducted or motivated by al Qaeda, we'll need a new framework for understanding its operations and guarding against them. We'll have to change our way of thinking about the group's threshold and targets — and reconsider our understanding of the way al Qaeda thinks about its own operations.

Some “understandings” should be reevaluated right away. It's not easy to know what to make of the lack of any claims of responsibility thus far for the Boston bombings. (Indeed, the only public claim seems to have come from the Pakistani Taliban, which insisted that they were not responsible.) So we're left with a mystery: Why would any group conduct such an attack and not claim it as their own? We may know more soon enough. But for now, contrary to what some experts have said, we simply have no reason to believe that the lack of any public claims argues for or against al Qaeda's culpability.

We also need to let go of our culturally myopic assumption that dates are important to al Qaeda. As best we know, April 15 — the date of the Boston Marathon — holds no obvious meaning for al Qaeda. But that's evidence of nothing. Twelve anniversaries of 9/11 itself have come and gone without the expected al Qaeda sequel attack. (Although some are still debating whether the terrorist attack in Benghazi last year that killed our ambassador to Libya was related to the 9/11 anniversary, I come down firmly on the side that it was not; indeed, it's still an open question whether the Benghazi perpetrators had much at all to do with al Qaeda's North African affiliate, let alone its faraway core in Pakistan.) We've already passed one anniversary of the death of bin Laden — and, again, no commemorative attack. Every date that was once believed to hold meaning for al Qaeda has come and gone without action. The most compelling argument to draw from all this is that al Qaeda attacks when it is good and ready, not on a predetermined schedule or on sentimental dates.

It may also be time to let go of the old assumption that al Qaeda attacks are characterized by a high degree of technical ability. Al Qaeda made clever strides to slip explosives past U.S. screening mechanisms, such as the 2009 underwear bomber; they developed their own recipes for explosives, like the liquid explosive that first appeared in 2006. But it may well also be true that the ready availability on the Internet of recipes, tactics, and devices has ushered in an era of more advanced “lone wolves” and domestic terrorists — at just about the same moment that counterterrorism pressure on al Qaeda has sapped its capabilities. To be sure, al Qaeda still has the means to produce the tools of terrorism, but their operational ability has long been depleted.

As a former senior counterterrorism official, my mind rushes naturally to such considerations. But precisely because I'm now out of government, I have time — without the old adrenaline and the old pressure — to step back for a moment from the “whodunit” questions. And that drives me to something that may be both more simple and more true. The Boston bombings are a reminder that there are evil, violent people out there who are willing to murder an 8-year-old boy, maim innocent bystanders, and deliberately target ordinary citizens. I expect we'll know more soon about their motives — but on some level, I'm not even sure I care that much. What's the difference if they ascribe this atrocity to a neo-Nazi, radical Islamist, or separatist anti-government ideology? Whatever their motive, they're cowardly murderers who need to be brought to justice.

The reflexive question — “Was this terrorism?” — shouted out so expectantly during the first press conferences after attacks on our fellow Americans, whether in Boston or Benghazi or elsewhere, reveals a certain cultural, even national, neurosis that we have about terrorism. Of course this is terrorism, even if it turns out to have lacked a familiar motive — and I'm glad people acknowledged that immediately this time. But why should we care that much? Does it matter to the victims or their loved ones what warped ideology the perpetrators believed in? No. Will it make it any easier to stop the next attack? I doubt it, though motive certainly helps make solving attacks easier. Maybe next time, rather than indulging our appetite for gruesome details, uninformed and premature speculation, and round-the-clock coverage, we could all pause and try to deprive the perpetrators — whoever they are — of the thing they most crave: attention.

For the people in government charged with protecting the homeland against terrorist attacks, the job has never been more difficult. Defending against spectacular attacks like 9/11 is one thing, but the Boston attack demonstrates how our definition of terrorism has changed — and how the job of defending ourselves has become all the harder.

This commentary originally appeared in Foreign Policy on April 18, 2013. Commentary gives RAND researchers a platform to convey insights based on their professional expertise and often on their peer-reviewed research and analysis.