Obama-Park Summit a Critical Opportunity for the US-Korea Alliance 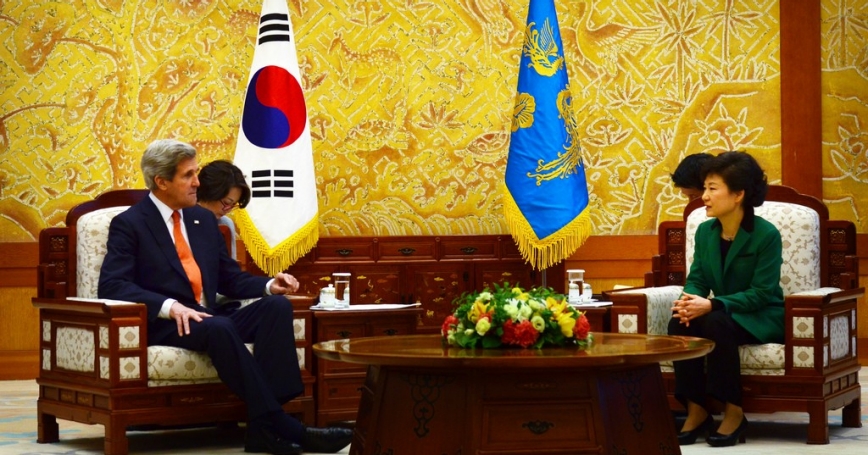 Hard on the heels of a pair of annual joint military exercises and the signing of a new defense cooperation agreement designed to ensure seamless allied coordination and credible deterrence toward North Korea, President Barack Obama will welcome newly elected President Park Geun-hye of South Korea to Washington May 6-8. Against a backdrop of escalating threats from North Korea to attack the United States, South Korea, and Japan with nuclear weapons, the first meeting between the two leaders will provide an opportunity to ensure that operational-level coordination does not fall victim to strategic-level misalignment. It also offers a chance to make critical operational changes to strengthen the alliance. To help ensure that the meeting gives President Park a sufficiently high profile to carry out the policy agreements reached at this session, the White House should consider the meeting a state visit, extending the new South Korean president the maximum possible diplomatic protocol and press attention.

Getting the relationship off on the right foot is important, something the White House signaled in March by sending National Security Advisor Tom Donilon to Seoul to personally extend the invitation to President Park shortly after her inauguration. Given the risks to stability and economic prosperity in the region stemming from North Korea's provocations, the two leaders are likely to put defense affairs front and center, prioritizing high-level coordination to ensure that their countries maximize the prospects for maintaining the peace. The United States and South Korea share both common values and common interests, and they are dedicated to democracy, free trade, and the construction of a rules-based order in East Asia. To preserve and protect the peace and freedom that has seen Asia develop into a third engine of the global economy, the United States and South Korea should take steps to deepen their security cooperation in three areas: bilateral alliance management, defense force modernization, and improved regional diplomatic coordination.

The United States and South Korea have formulated plans to transfer wartime operational control over Korean forces back to Seoul in 2015. However, in light of the current instability on the peninsula, the two leaders might want to reassess the timing of such a move. The transfer could be interpreted in Pyongyang as a weakening of the overall US commitment to South Korea's defense, a perception widely believed to have helped bring on the North Korean invasion that started the Korean War in June 1950. If the two leaders judge that the politics of entirely abandoning the transfer are too difficult, then, at a minimum, they should adopt an approach that benchmarks the transfer against a series of metrics based on acquired (and demonstrated) South Korean capabilities, rather than simply setting an arbitrary deadline with no reference to actual conditions on the peninsula. The recent news that the two sides will retain the Combined Forces Command even after 2015 is a good sign that Washington and Seoul will work to minimize any possible disruptions in command and control that could stem from changes to the way the two militaries would be managed during wartime.

The two presidents may also consider addressing several weaknesses in South Korea's overall defense posture. The South's defenses could be improved by acquiring additional capabilities in command, control, and communications; intelligence, surveillance, and reconnaissance (ISR); counter-artillery, -rocket, -mortar, and -missile defenses; improved cyber capabilities; “brown-water” or coastal defenses; and countermine and anti-submarine warfare. Past Korean leaders have invested heavily in large prestige platforms, such as advanced tanks and armored personnel carriers, surface vessels, and advanced fighters. But any future North Korean attack is much more likely to be asymmetric, coming in the form of limited, rapid, and possibly even plausibly deniable strikes, rather than in the form of a head-on assault by outdated platforms over land, in the air, or at sea. Such asymmetric strikes have characterized the North's attacks in recent years, including surprise attacks by surface vessels in the West Sea; massive cyber attacks on South Korea's banking, media, and government information infrastructure; the sinking of the South Korean corvette Cheonan; and the strike against Yeonpyeong Island in late 2010. None of these attacks allowed the South to leverage its advantages in topographical defenses or its advanced technology platforms. Instead, they struck at perceived weaknesses in the South's defense posture.

To improve US and South Korean deterrence, Washington and Seoul agreed late last year to lift constraints on the South's ability to acquire ballistic missiles with the range necessary to strike North Korean missile bases. The Obama administration might opt to build on the goodwill that this agreement generated by opening the door to increased collaboration on air- and space-borne intelligence, surveillance and reconnaissance against North Korea, an approach that would conceivably also lead to improved information sharing with Japan. A set of contingency plans for US-Korea defense cooperation announced on March 22 clarified that US Forces Japan will help respond to any North Korean provocations affecting US Forces Korea, further prioritizing trilateral Korea-US-Japan cooperation and interoperability, as well as improved relations between Seoul and Tokyo.

The United States could also choose to move quickly to help South Korea improve its integrated air and missile defenses and counter-rocket, -artillery, and -mortar capabilities, because, at present, North Korea effectively holds Seoul's enormous civilian population hostage through its ability to use these conventional strike capabilities against the South. Helping the South Korean Navy further enhance its counter-mine and anti-submarine warfare capabilities could also be critical to ensuring the South's ability to defend its extensive coastline and frontline islands.

If they opt to prioritize the development of South Korea's defense capabilities, Presidents Obama and Park would likely accelerate plans announced last October to enhance cooperation in space-based situational awareness. The two presidents may also accelerate moves to build and jointly exercise additional cyber capabilities, something the Korean side announced in April. Each of these moves would improve the alliance's picture of what's happening on the ground, in the air, on and under the surface of the ocean, and in the space and cyber realms, giving national leaders better options to respond quickly and effectively. If the South ends up assuming wartime operational control over its forces, redressing these weaknesses will be critical. If the transfer is benchmarked or cancelled altogether, these capabilities would still pay substantial dividends in the event of a crisis or conflict.

Finally, the two sides will likely consider steps to help reinforce the political support that undergirds the alliance in each country, clarifying the importance of deeper cooperation, including regional coordination.

First, opportunities continue to exist for deeper defense industrial cooperation. Examples include South Korea's on-going procurement decision for its next-generation fighter, which will almost certainly be based on an advanced US fighter design. In turn, Obama could emphasize the two-way nature of this cooperation by acknowledging the increasing sophistication of the Korean aerospace industry, including its likely competitiveness in the upcoming competition for the US Air Force's next-generation fighter trainer.

Second, the two leaders could usefully garner political capital for the alliance by highlighting the successful handling under the current Status of Forces Agreement of a recent incident in which a small number of US Army soldiers stationed in Korea allegedly fired a pellet gun at civilians, assaulted a Korean law enforcement officer, and then led police on a high-speed chase in downtown Seoul. While some Koreans have worried that US soldiers who commit crimes in the country would be shielded from the consequences of their actions by diplomatic pressure, in practice, the two sides have cooperated extremely effectively, proving that their relationship — including that of their militaries — is governed by the rule of law.

Third, President Obama may emphasize to President Park his administration's view that cooperation among US allies is essential at this critical juncture, and work to identify a positive role to play that will bring South Korea, the United States, and Japan into closer defense cooperation and more frequent trilateral engagement. Models already exist in the form of the Trilateral Coordination and Oversight Group, which helped ensure a joint approach among the three countries in responding to the first North Korean nuclear crisis in the mid-1990s. More recently, the three sides cooperated on defense affairs through the participation of Japanese Self-Defense Forces officers as observers in joint US-Korea defense exercises in 2010, and Seoul and Tokyo nearly completed an Acquisition and Cross-Servicing Agreement and a General Security of Military Information Agreement last summer. Encouraging Seoul and Tokyo to enhance defense cooperation should be an important goal of US foreign and security policies in Northeast Asia. For its part, Japan appears ready to work with Korea, as Tokyo's ambassador to Seoul declared on April 18 when he remarked that “Japan is willing to sign the military intelligence-sharing pact with South Korea at any time.” The door to deeper trilateral communication and coordination is now clearly open again from the Japanese side, and President Obama is likely to encourage the Korean president to work toward greater defense cooperation with Japan.

In closing, if the two leaders get their relationship off on the right foot by establishing a personal rapport, the impact could be critically important for enhancing security, in both South Korea and the United States. The challenges the two sides face are growing sharper, and the need for closer cooperation and integration is becoming clearer.

The alliance has provided 60 years of security for South Korea, and the country has used that time to become a global economic powerhouse and an increasingly important partner of the United States. An example is the Korea-US free trade agreement that entered into force on March 15, 2012, which has already led to a strong expansion in bilateral trade. The two leaders may decide the time is right to build on this progress, with Obama encouraging Korea to join the Trans-Pacific Partnership — an effort to create a high-standard 21st-century trade agreement. To support this effort, it would be important for the two leaders to publicly reflect on how the countries' joint economic gains can be better undergirded by further coordination in the realms of defense and diplomacy.

Ahead of the 60th anniversary of the ceasefire that ended the Korean War on July 27, an appropriate way to honor the men and women who gave so much in defense of South Korea would be to ensure that the shortcomings of the alliance today are resolved expeditiously, reducing the prospect that anyone else will have to make similar sacrifices in the future.

This commentary originally appeared in PacNet, CSIS and Asia Times on April 17, 2013. Commentary gives RAND researchers a platform to convey insights based on their professional expertise and often on their peer-reviewed research and analysis.