Why Iran Is Trying to Save the Syrian Regime 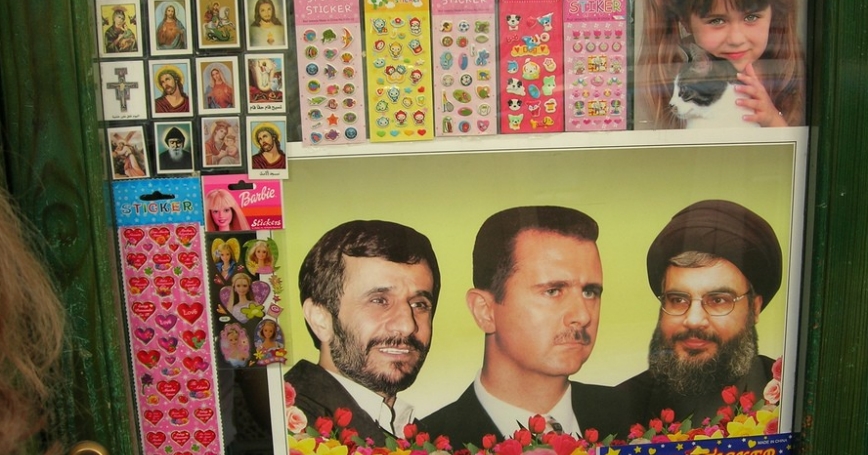 The Islamic Republic of Iran is a crucial player in the current Syrian conflict. Iran is the Syrian regime's biggest supporter, even more so than Russia. Tehran's ties with Damascus have historically been based on shared strategic interests, including thwarting U.S. and Israeli power in the Middle East. Both countries have also relied on each other to balance unfriendly Arab states.

The Syrian-Iranian alliance has largely lacked an ideological or religious dimension. The secular Syrian regime is dominated by members of the Alawite sect, which is distantly related to the Shi'a religion practiced by the majority of Iranians. Yet the Islamic Republic, the world's only theocracy, has displayed little religious affinity for the Assad regime. Rather, Tehran views Syria as a strategic gateway to the Arab world, a bulwark against American and Israeli power, and, perhaps most importantly, a crucial link to Lebanese Hezbollah. Syria is also a buffer against internal instability in Iran.

Iran's position on Syria is straightforward: It will do its best to keep Bashar Assad in power. But Tehran is smart enough to realize the Syrian regime could be overthrown sooner or later. Hence, Iran has stepped up its support of Alawite and other minority militias, not only to preserve some influence in Syria but also (and more importantly) to maintain a physical connection to Hezbollah if Assad is overthrown.

The Alawites are often referred to as an offshoot of Shi'a Islam, but religion's importance as a bond between Iran and Syria should not be overstated. Some Shi'a clerics, such as the spiritual founder of Hezbollah, Musa al-Sadr, may have recognized Alawites as “true” Shi'a, but the Alawites' more esoteric religious traditions, including the lack of an organized clergy and syncretic beliefs, clearly distinguish them from the Shi'ism prevalent in Iran and Iraq.

The close ties between Iran and Syria are based on geopolitics rather than religion. Iran has long viewed Syria as a counterweight to the United States, Israel, and its Arab rivals. Iran's war with Iraq cemented the Iranian-Syrian partnership.

The Islamic Republic was regionally isolated due to its efforts to “export” the Iranian Revolution to the Arab world, and major Arab powers, such as Saudi Arabia and Egypt, backed Saddam Hussein during the war. Syria, ruled by Bashar's father, Hafez al-Assad, was the only Middle Eastern state that actively backed Iran during the war. Hafez al-Assad viewed the Baathist regime in Iraq as a major threat to Syrian interests; the Iran-Iraq conflict sapped Iraq's energy and prevented it from focusing on Syria.

The Islamic Republic soon thereafter emerged as an influential power in Lebanon, in Syria's backyard. The historic disenfranchisement of the Lebanese Shi'a and Iran's newfound revolutionary zeal allowed Tehran to make major inroads into Lebanon by helping to create Hezbollah. Hafez al-Assad, unlike his son, Bashar, hesitated to fully embrace Iranian involvement in Lebanon, but he viewed Iran and Hezbollah as a useful counterweight to Syria's chief adversary, Israel. Syria's support for Iran during its war with Iraq, coupled with the al-Assad regime's facilitation of Iranian/Hezbollah power in Syria, led to a close alliance between Iran and Syria – despite the major religious and ethnic differences between the two nations.

Bashar Assad further strengthened Syria's alliance with Iran during his tumultuous rule to such an extent that his father may have disapproved. A major reason for this may have been his regime's critical vulnerabilities; the Alawites, compromising about 12 percent of the Syrian population, ruled over a restive Sunni majority population. The Assad regime's corruption and brutal repression of dissent further weakened its legitimacy and made it even more dependent on Iran as a regime protector.

Moreover, Iran and Hezbollah protected Syrian interests in the face of external threats. The 2003 U.S. invasion of Iraq was viewed as a major threat by the Syrian regime, which considered itself a possible target of an American driven regime change.

Damascus also saw Hezbollah's 2006 war with Israel as a victory. For the first time since 1973, an Arab armed force had been able to withstand an Israeli assault while inflicting significant casualties. Hezbollah relied heavily on Iranian weapons and military tactics, which enhanced Iran's value in the eyes of the Syrian leadership.

It is not surprising that Iran and its Revolutionary Guards have played a large role in fighting insurgents seeking to overthrow Assad. The Islamic Republic, isolated internationally and regionally due its nuclear pursuits, cannot afford to lose Syria as an ally. The fall of the Assad regime would not only affect Tehran's ability to maintain influence in the Arab world, but it would also degrade its ability to sustain Hezbollah militarily.

Most of the weapons that Tehran routes to Hezbollah are shipped through Syria. The only other efficient way is through Turkey. Ankara, which competes with Tehran for influence in the Middle East, has prevented Iranian planes and trucks from supplying Syria and Hezbollah through its territory. Iran could supply Hezbollah by sea, but this would take much longer, and Iranian ships would be vulnerable to interdiction.

The elimination of the Syrian routes to Hezbollah could prevent Iran from resupplying Hezbollah in a future conflict with Israel. Such a scenario could make Israel more willing to attack not only Hezbollah but also Iran's nuclear facilitates. Hezbollah's thousands of missiles, some of which can reach Tel Aviv and other major Israeli cities, are an important Iranian deterrent against an Israeli attack on its territory.

Iran's top leadership appears to view the Syrian conflict in very black-and-white terms. Supreme Leader Ayatollah Ali Khamenei believes the Syrian regime to be a crucial part of the “axis of resistance” against Israel and a frontline in Iran's struggle with the United States. Some Iranian officials have questioned Tehran's unqualified support for Assad, but the Islamic Republic appears to have adopted a policy of all-out support.

This ensures that Syria will be as violent and chaotic as possible; if the internal opposition to the Islamic Republic ever contemplates a mass uprising, then the regime can point to a bloody Syria as the ultimate result. Furthermore, the creation of Syrian paramilitary forces modeled after the Basij could help Iran maintain some influence in a post-Assad Syria ruled by the Sunni majority. More importantly, Iran could still maintain a network to arm Hezbollah through Syria.

Iran's outlook and policy suggest a lack of willingness to negotiate with the United States on the Syria issue, especially as long as the United States and its allies intend to overthrow the Alawite-dominated regime. But Tehran may be more open to negotiation if it is assured a significant level of influence in Syria. Of course, such a Faustian bargain would be anathema to a Syrian opposition that may come to rule the country one day. At the same time, strong Iranian influence in a post-war Syria could ultimately weaken the future U.S. position, not only in Syria, but in the wider Sunni-majority Arab world as well.

This commentary originally appeared in U.S. News & World Report on April 24, 2013. Commentary gives RAND researchers a platform to convey insights based on their professional expertise and often on their peer-reviewed research and analysis.