Why It's No Longer the Chummy 1990s for Turkey, Israel 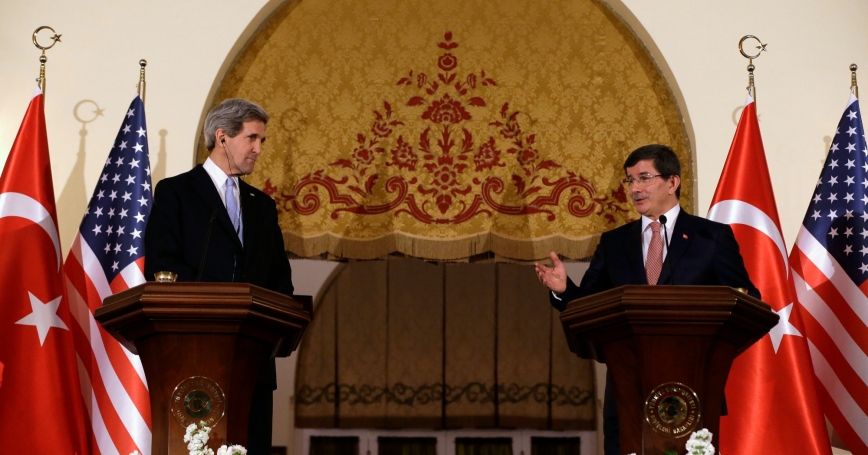 Good news from the Middle East is worth savoring these days, so President Obama is entitled to take a bow for helping ease the long strain in relations between Israel and Turkey. Furthering that progress was high on Secretary of State John Kerry's agenda, as he visited Turkey on Sunday and then flew on to Israel.

But let's not get carried away. The to-do list for renewed cooperation is long: Syria, the Middle East peace process, and the general uncertainty created by the Arab Spring. Much separates these two countries that once shared a strategic closeness so needed in this troubled region.

Certainly Mr. Obama recognizes the need for rapprochement. As he was leaving Israel late last month, he helped broker an apology from Israeli Prime Minister Benjamin Netanyahu to Turkish Prime Minister Recep Tayyip Erdogan for the death of nine Turkish citizens killed in an Israeli commando raid on a Turkish ship bound for the Gaza Strip in May 2010.

Such an apology had long eluded other mediators, and Obama's efforts helped halt the damaging deterioration of relations between two of America's most important allies in the Middle East. But Israel's apology is unlikely to spur a return to the type of warm defense and intelligence cooperation that marked the two countries' relations in the late 1990s.

The close Turkish-Israeli defense relationship of that time was the product of a specific strategic context — and the geopolitical circumstances that drove Turkish-Israeli cooperation have changed significantly since then.

In the 1990s, Turkey was driven closer to Israel out of regional necessity. Turkey's relations with the Arab world were frayed, and Turkey needed Israel as a bulwark against Syria, which had one of the largest and best equipped armed forces in the Middle East.

Today Ankara's strategic situation is radically different. Turkey's relations with the Arab world have significantly improved. Mr. Erdogan's own brand of moderate political Islam and willingness to talk tough on behalf of the people of Gaza have made him one of the most popular leaders in the Middle East. Many Arabs see the Turkish political-economic system as a potential model for their own countries. Thus Turkey needs Israel less than it did a decade ago.

Moreover, those warm 1990s defense ties between Israel and Turkey stemmed from a domestic political context in Ankara that has changed dramatically. The main proponent of the close defense and intelligence ties with Israel was the Turkish military. Back then, the generals had the dominant say on Turkish foreign policy. Today, the military's influence over Turkey's role in the world has palpably declined. Over the past decade Erdogan has systematically strengthened civilian control over the military. Today, the elected prime minister, not the unelected military, determines policy toward Israel.

In the late 1990s, Turkish leaders also saw Israel as an important vehicle for obtaining sophisticated military technology. Today, Turkey's procurement options have considerably expanded. It no longer depends heavily on Israel for obtaining state-of-the-art arms. Ankara is developing its own defense industry and has entered into a number of joint-production cooperation deals, such as with South Korea to produce main battle tanks.

Things have changed on the Israeli side, too. A decade ago, many Israelis saw Turkey as a valuable mediator in Israel's troubled relations with the Arab world. However, Erdogan's strident support of the Palestinian cause, his rhetoric branding Zionism as a “crime against humanity,” and his blistering criticism of what he calls Israel's siege of Gaza have left Israeli leaders wary and mistrustful.

Israeli officials no longer regard Turkey as an honest broker but as an ardent advocate of the Palestinian cause. In Israeli eyes, this undermines Ankara's ability to act as an intermediary in the Arab-Israeli conflict and a bridge to the wider Muslim world.

Turkey and Israel have other deep-seated differences: over Iran, Israel's own nuclear program, and the question of Israeli settlements in the West Bank. These strains put firm limits on the degree of rapprochement likely to occur between Turkey and Israel — even if relations return to normal.

So nobody should expect a return to the halcyon, late-1990s period of defense cooperation. Nevertheless, Mr. Netanyahu's apology for the 2010 Gaza flotilla incident is important. It does not guarantee better Turkish-Israeli relations, but it does remove a major obstacle to them. And it will make it easier for Turkey to win approval of several defense items currently blocked in Congress over the rift in relations with Israel.

For Israel, the apology is an important step toward reducing Jerusalem's diplomatic isolation and restoring more cordial ties to Washington, which were strained during Obama's first term. Israel can ill afford to alienate the United States at a time when instability and unrest in the Middle East are on the rise. Indeed, the deteriorating situation in Syria, which borders Israel and Turkey, appears to have been one of the main catalysts for the apology.

Finally, Netanyahu's apology opens important prospects for closer energy cooperation in the eastern Mediterranean, especially regarding natural gas. Turkish officials have expressed an interest in developing an undersea pipeline with Israel to link the Jewish state to the European market via Turkey.

It's a win-win on smaller issues, even while the larger ones remain hanging. Such progress is a welcome rarity in the Middle East.

This commentary originally appeared in Christian Science Monitor on April 8, 2013. Commentary gives RAND researchers a platform to convey insights based on their professional expertise and often on their peer-reviewed research and analysis.