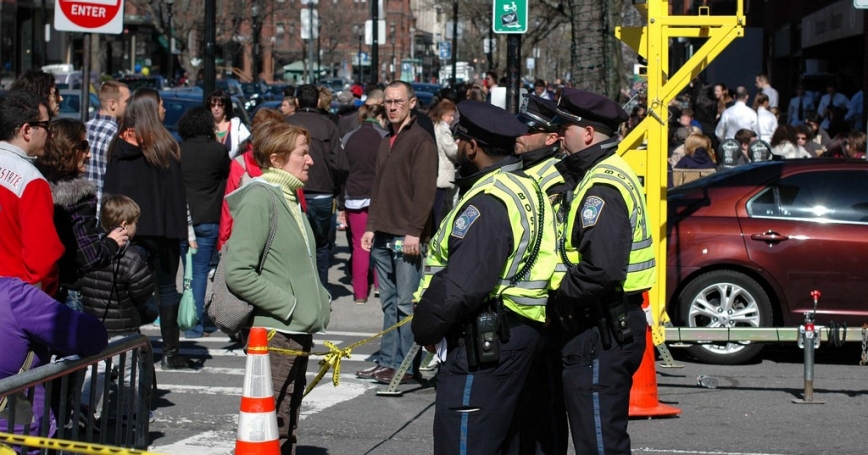 The investigation of the Boston Marathon bombing highlighted growing public participation in protecting communities against terrorism. People on the scene before the medical teams arrived were the real first responders, as ordinary citizens always are in such cases. Shocked by the attack, Bostonians were eager to assist authorities in running the bombers down before they could strike again. It worked both ways as police opened their filters to enlist public assistance.

Spectators provided police with their videos of the event. They assisted in identifying the bombers. They obeyed the controversial order to stay off the streets. It was a citizen's tip that led to the capture of the second suspect. The spontaneous expressions of joy at the apprehension of the second suspect reflected not only relief, but also a sense of shared achievement.

We are entering an era of crowd-sourced law enforcement in which Americans are increasingly taking an active role in their own defense, heading off terrorist attacks in the making and joining the pursuit of those who have carried out their violent plans.

It is not certain if public involvement on this scale reflects a fleeting sense of community caused by the tragedy or a broader trend, but it contrasts with the immediate post-9/11 years when federal officials periodically announced that credible intelligence indicated imminent danger of terrorist attack, warning citizens to be vigilant (never operationally defined), while at the same time, advising people to go about their business as usual.

It was a schizophrenic message. Warning people they might be under threat—although the risk to individual citizens was statistically minuscule—while telling them there is nothing they can do about it creates anxiety and alarm, which is exactly what terrorists seek. And being told to stand aside was in itself contrary to American traditions of involvement, self-defense and self-reliance.

Citizen involvement today begins with heading off potential threats before they happen. Relatives and friends of individuals who seem to be turning toward extremist ideologies are encouraged to dissuade them from destructive paths or report them.

No one knows how many times this very private intervention may occur, but when it was discovered in 2008 that young Somali-Americans were being recruited to blow themselves up in Mogadishu, the FBI and local police departments enlisted the cooperation of Somali communities and successfully reduced the flow. And five Northern Virginia men were arrested on terrorism charges in Pakistan in 2010 after the admitted jihadists were turned in to the FBI by their worried parents.

Merchants are asked to inform police of suspicious purchases of substances or items that could be used in improvised explosive devices—young men buying large quantities of hair bleach for example. Those working in specific industries, like transportation or shipping, who might encounter suspicious activities in their sectors are asked to report them. Citizens' tips, in fact, have thwarted many terrorist plots in the United States since 9/11.

Neighborhood Watch is nothing new, but it has been extended beyond local vigilance to “See Something-Say Something” campaigns where people are asked to notify police of suspicious objects or behavior. Public awareness campaigns that focused on “left parcels” in London's subways pushed would-be bombers to less lucrative targets on the outskirts of the city during the IRA's terrorist campaign. But awareness of bombs left in public places didn't help when suicide bombers carried explosives-filled backpacks into London's public transport system in 2005.

Public involvement does not end with apprehension. The final phase takes place in a courtroom where citizens participate in the trial as witnesses, members of juries, and spectators to the delivery of justice. Treating terrorist suspects as enemy combatants, to be held indefinitely in military custody, would banish this vital finale to the invisible realm of military tribunals, and could discourage public assistance.

A large number of citizens spending a lot of time watching each other can create a surveillance society—a nation of informants—although efforts to involve the public in the United States focus on suspicious actions, not subversive thought. This is not a police state where citizens are pressured to report criticism of government officials or complaints about the economy. Nonetheless, current events and technological advances have put us into new territory requiring sound judgment and new rules. After Boston, the social media site Reddit apologized for fueling online witch hunts.

Medieval law required people to raise the “hue and cry” to assist in the pursuit of criminals. Today, those shouts have been replaced by the clicks of a thousand camera-phones and text messages. At the very least, the knowledge that their images and descriptions can be spread to millions instantly should make would-be terrorists more apprehensive. More important, perhaps, is that involvement can transform members of the public from helpless bystanders into active participants in their own defense, thereby reducing fear and alarm.

Not far from the finishing line of the Boston marathon, 238 years ago another group of aroused citizens decided to defend themselves against tyranny. How fitting then that Boston should be the place where ordinary Americans have stood their ground against the tyranny of terrorism.

Brian Michael Jenkins is Senior Adviser to the President at RAND, a nonprofit, nonpartisan research institution.

This commentary originally appeared on The RAND Blog and GlobalSecurity.org on May 13, 2013. Commentary gives RAND researchers a platform to convey insights based on their professional expertise and often on their peer-reviewed research and analysis.