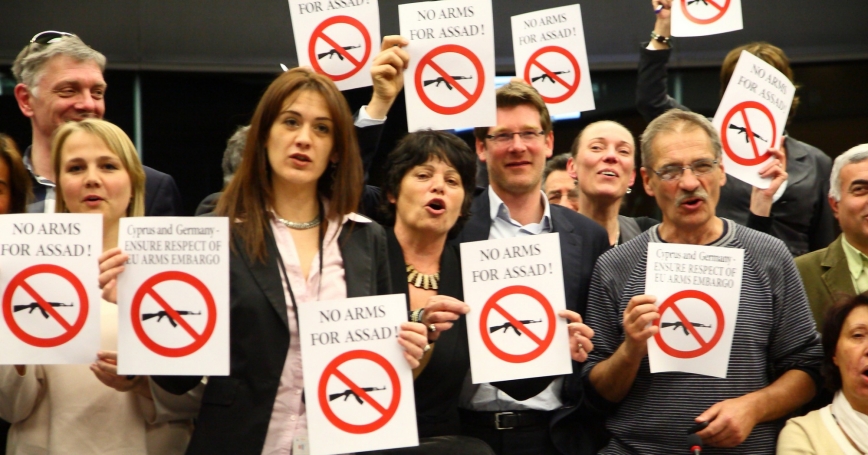 The European Union's move on Monday to lift its arms embargo on Syria will allow European states, notably France and Britain, to arm rebel groups in their war against the Bashar Assad regime. U.K. Foreign Secretary William Hague said the decision sends “a very strong message from Europe to the Assad regime.”

But what is that message? Are France and Britain preparing to arm the rebels, or do they just want to put that possibility on the table as peace talks commence? Does the debate over the issue send a message that Europe is far from united about the need to help the rebels? Or could it be that lifting the embargo would make it easier to put together a coalition to intervene on the ground should that option become necessary?

Most EU members — led by Sweden, Austria and the Czech Republic — strongly objected to lifting the embargo, citing concerns that European weapons could get into the hands of extremists and that arms shipments could negatively affect existing regional peacekeeping deployments, for example, in the Golan Heights. Because continuing the embargo required agreement of all members, however, they couldn't stop France and Britain from putting an end to it.

Many European leaders no doubt have serious concerns about the impact deeper European involvement in Syria could have on relations with Russia. Relations between the EU and Russia have been on a downtrend trend since Vladimir Putin's election a little over a year ago, but this doesn't mean they don't fear an even deeper rift over Syria.

Meanwhile, the sheer complexity of the problem and current absence of any plan for post-conflict stabilization have made otherwise pro-intervention European figures, like the German parliamentarian Elke Hoff, balk. Few leaders are ready to commit forces to Syria before their troops have even started to return home from Afghanistan.

One view is, therefore, that the end of the embargo does little to move the U.S. and Europe closer to intervention. From this perspective, contrary to what Hague claims, the real signal out of the acrimonious debate was that most European states are still against any military action on Syria.

So should Assad and his supporters feel relieved that the appetite for intervention is so weak among America's allies? Not necessarily. Another view is that what really matters about the lifting of the arms embargo is that France and Britain were in agreement. After all, these are the two nations that actually have militaries capable of making a significant contribution to an intervention. These were the two states that pushed for intervention in Libya and eventually succeeded over the objections of many other European states, including Germany.

France and Britain say they are not planning any arms shipments at this time. The decision thus seems unlikely to have a significant impact on the ground in the near term. It may put the opposition in a slightly stronger position in peace talks scheduled for Geneva next month, but the effect will be modest at best and do nothing to help overcome the Free Syrian Army's internal divisions, which are currently its biggest problem.

Nevertheless, if the U.S., France and the U.K. agree that they want to move ahead, they may do so even if most European states still have cold feet. Especially with strong Turkish support, further spillover of the conflict into Turkey and Lebanon or the use of chemical weapons, a coalition ready to do more than just arm the rebels could form quite quickly. This is basically what happened in Libya two years ago, and, roughly, in Mali earlier this year.

In any case, Hague is correct when he says lifting the embargo sends a “very strong signal” to Syria. And that message is that Britain and France want to keep their options open.

Christopher S. Chivvis is a senior political scientist at the nonprofit, nonpartisan RAND Corporation and adjunct professor of European Studies at the Johns Hopkins School of Advanced International Studies.

This commentary originally appeared on U.S. News & World Report on May 30, 2013. Commentary gives RAND researchers a platform to convey insights based on their professional expertise and often on their peer-reviewed research and analysis.