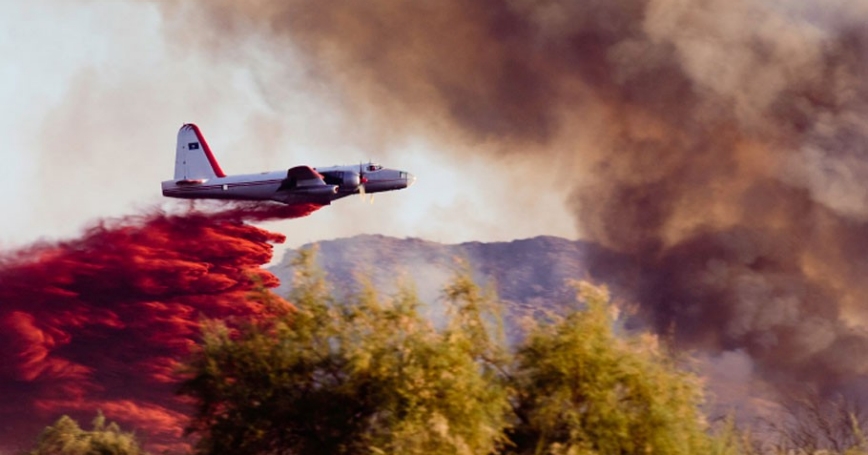 The western United States will be facing fire season in a few months and the Forest Service is preparing to respond within the budget constraints of sequestration.

The summer fire season is the most taxing time for the Forest Service's fleet of aircraft because of the sheer number of fires that start across the western half of the U.S. There have already been large fires even before the start of this year's wildfire season, such as the Camarillo wildfire near Malibu, CA, that has burned at least 28,000 acres. As part of ongoing efforts to recapitalize their fire-fighting aircraft fleet, the Forest Service recently announced that it would be using six large air tankers and a DC-10. Large air tankers drop between 1,000 and 4,000 gallons of water or fire retardant, but the DC-10 is much larger and is in a class of aircraft known as very large air tankers (or VLATs in Forest Service parlance). VLATs can drop 10,000 gallons or more of water or fire retardant to put out or contain fires.

In 2012, when RAND published a study of the Forest Service's aviation program, our focus was on the cost effectiveness of large aircraft including large helicopters, scoopers, and large air tankers—but not VLATs. Our study, which focused specifically on the options under consideration at the time, found that the most cost-effective fleet would primarily consist of scoopers, but we did recommend that the Forest Service use a few large helicopters and air tankers for a niche capability targeting those fires where scoopers could not easily acquire water.

While most people are familiar with images of raging forest fires that burn thousands of acres, a primary use for aviation is in the initial attack on wildfires. Initial attack occurs shortly after the fire has been ignited, but before it has had the chance to grow large. When a fire is caught at this stage it can be put out with relatively few resources and before it has done significant damage. Thus, having a fleet of aircraft that can support a quick response to fires in their early stages is of central importance. We were able to identify several key factors that influence the ability of the Forest Service to respond quickly, including predictions about where fires will occur, the basing of the response aircraft, and the rate at which water or retardant can be applied to a fire.

An independent study could also assess the results from use of the DC-10 tanker, which could then inform decisions about the best use for VLATs. This type of analysis could help determine if further changes in the mix of aircraft are needed. Independent analysis of wildfire forecasts, basing, and fleet responsiveness should also be considered as the Forest Service and Congress work through the acquisition policy for new aircraft. Well-designed data collection and independent, objective analysis will be key to informing these important decisions.