How to Avert a Sea Catastrophe with China 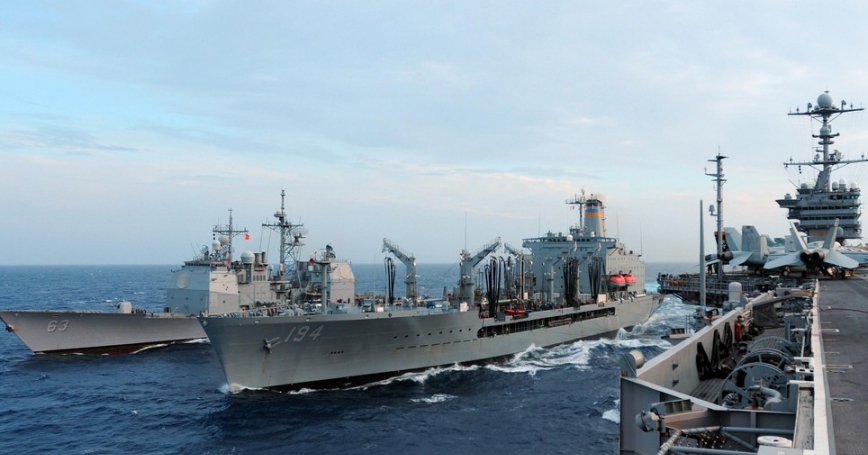 Beneath the tensions over conflicting territorial claims in the East China and South China Seas, a potentially dangerous sea-power rivalry is brewing between the United States and China. Because China views U.S. naval forces in East Asian waters as menacing and a potential barrier to its access to the world's oceans, resources and markets, it is deploying anti-ship missiles, submarines, space-based sensors and cyberwar capabilities to hold those forces at bay.

China is also expanding its own naval forces to enforce its claims and extend its influence. Because this vital region could become unstable or fall under China's sway if U.S. sea power recedes or is allowed to become vulnerable, the United States will have to meet this challenge, one way or another.

Sea-power rivalries have a way of ending badly. In the late 1800s, Germany challenged British sea supremacy, which was seen as a threat to its overseas access and goal of becoming a world power. Despite close economic ties and mutual interest in maritime security, Britain regarded Germany's naval build-up as a strategic threat and so further expanded the Royal Navy. The ensuing "dreadnought arms race" contributed to Anglo-German antagonism that ended in World War I. For China and the United States today, the Anglo-German case is a cautionary tale.

While the Chinese have not yet decided to become a global sea power, they are moving from coastal defense to extending their naval reach into disputed seas. Some Chinese favor a cooperative instead of confrontational approach to maritime security — after all, 95 percent of Chinese trade goes by sea.

But increasingly influential Chinese admirals view the U.S. Navy essentially as German admirals viewed the Royal Navy: as a challenge. Because of the strike power of U.S. aircraft carriers, they are China's highest priority targets — and are increasingly hard to defend. Carriers will remain invaluable for the United States elsewhere, but their vulnerability is becoming a liability in the Western Pacific.

In response, the U.S. Navy, in conjunction with the Air Force, has come up with a strategy called Air-Sea Battle, which would destroy Chinese capabilities before they can target U.S. ones. While this is an option worth having, using it would be escalatory in that it could require striking Chinese territory. It could also be destabilizing, in that it would be most effective if employed at the very outset of a conflict, thus increasing China's incentive to attack first, early or even preemptively. Moreover, because Air-Sea Battle relies on computer networks for command and control, it may become vulnerable to Chinese cyberattacks.

A better U.S. response is to outfox Chinese targeting by shifting to more distributed, numerous, diverse, elusive, small, long-range and hard-to-find naval strike forces, as well as drones and cyber-war. A more survivable U.S. strike posture along these lines would be neither escalatory nor destabilizing. Rather, by facing China with a far more perplexing targeting challenge, it would deter Chinese risk-taking, obviate the need for U.S. preemption and allow time for a crisis to be defused.

But the United States is unlikely to make a rapid shift to such a strategy, what with the long lead-times required, fiscal constraints and institutional-industrial inertia. Moreover, even if U.S. naval forces were less concentrated and conspicuous, they might still be targetable and would remain vulnerable to cyberwar. Given the fact that the United States cannot retreat from this region's waters, it should also pursue a political alternative to head-to-head sea-power rivalry — one that involves its regional partners and, ideally, China itself.

Specifically, the United States should propose and pursue an East Asian maritime partnership, inviting to join all states that share its interest in assured access and passage. The partnership would be based on the norms that disputes should be settled nonviolently and that civilian shipping engaged in peaceful, peacetime trade should not be threatened.

These principles could be buttressed by enhanced maritime information-sharing, crisis consultations, joint exercises and operations (e.g., against non-state threats) and measures to avoid incidents. Resolving the region's complex maritime legal disputes should not be a precondition for creating or joining the partnership; but a pledge to refrain from force in the meantime should be.

Neither the United States nor China would be expected to reduce its sea-power capabilities or relinquish any of its options in the event of war. While such a partnership would not preclude competition or conflict outright, it could reduce mistrust and mistakes of the sort that are more likely than rational forethought to trigger Sino-U.S. hostilities.

Apart from China, a number of East Asian states are developing some of the world's most advanced naval forces. While the United States should not seek to align China's oceanic neighbors against it, China should take care not to give them cause to do so by rejecting a cooperative arrangement. Indications are that some Chinese are getting worried about regional isolation in reaction to China's growing power and assertiveness. Maybe Chinese nationalism, weak civilian control of the military and distrust of American motives would make China's accession unlikely, at least for now. A cooperative approach to maritime security in East Asia may be a long shot. But the advantages of an arrangement that could build familiarity and confidence while reducing dangers at sea are substantial.

David C. Gompert is an adjunct senior fellow at the non-profit, non-partisan RAND Corporation and the author of the new study Sea Power and American Interests in the Western Pacific.

This commentary originally appeared in U.S. News & World Report on May 8, 2013. Commentary gives RAND researchers a platform to convey insights based on their professional expertise and often on their peer-reviewed research and analysis.