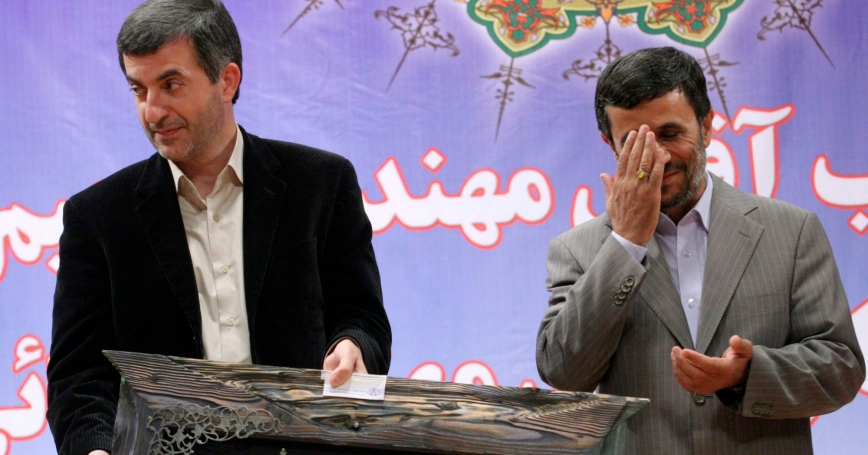 Mahmoud Ahmadinejad is hardly a poster boy for reform in Iran. He has depicted himself as an original revolutionary and ideological purist. He has questioned the Holocaust and is virulently anti-Israeli in his rhetoric. His re-election as president in 2009 set off the largest popular demonstration since the 1979 revolution. And his presidency has produced an era of economic stagnation, international isolation and deep anxiety for the Iranian people.

Yet Ahmadinejad today intends to remain a pivotal political player in Iran and a persistent threat to the power of Supreme Leader Ayatollah Ali Khamenei. Unable to run in the upcoming June 2013 presidential election, Ahmadinejad is grooming Esfandiar Rahim Mashaei, his in-law and chief ally, to continue his political legacy.

Mashaei's ideology, a combination of nationalism and anti-clerical populism, could be a direct challenge to Khamenei's authority. Mashaei and Ahmadinejad represent a significant ideological current within the Islamic Republic, one that is based on the principles of the 1979 Iranian revolution, but that implicitly acknowledges the failures of the Islamic Republic and its corrupt ruling elite to create a just society.

Mashaei's campaign, which began with the Persian New Year and the beginning of spring, is not only meant to garner votes, but perhaps to mobilize the Iranian population in the event of a showdown with the Iranian regime. This is enough reason for Iran's ruling elite to try to block his candidacy. But he and his mentor, Ahmadinejad, are unlikely to react to any restrictions quietly.

Ahmadinejad was a dark horse in the 2005 presidential election. Many Iranians may have recognized him as Tehran's mayor, but few thought he could become the country's second most powerful political figure. But as he rose to power, Ahmadinejad had a lot of things going for him.

First, he had Khamenei's support and that of the Revolutionary Guards. At the same time, Ahmadinejad's opposition to the reformists under President Mohammad Khatami and his public attacks on “corruption,” which were aimed implicitly at former President Ayatollah Hashemi Rafsanjani, made him a favored candidate among many Iranians.

He also struck a populist chord by wearing a kaapshen, the humble Iranian jacket, and driving an old car. This boosted his support among a public weary of the regime's corruption and unkept economic promises. Ahmadinejad promised to put “oil money” on the people's tables and fight for their share of the revolutionary pie.

Moreover, Ahmadinejad's anti-American and anti-Israeli rhetoric presented a strong response to George W. Bush's branding of Iran as a member of the “Axis of Evil.” Ahmadinejad would not only contain and roll back the reformists, but he also would stand his ground in the face of America and its “global arrogance.”

Ahmadinejad also challenged the political status quo in surprising ways, rebuking Khamenei, the man responsible for his political ascendancy, by firing the Minister of Intelligence despite Khamenei's disapproval. Ahmadinejad's claim of being in communication with the Hidden Imam, the Shi'a messiah, is also a subtle challenge to Iranian clerics, including Khamenei, who claim to be the intermediaries between the believers and the Hidden Imam.

Ahmadinejad is also a strong proponent of Iranian nationalist symbols; he has praised Cyrus the Great, the ancient founder of the Iranian nation, and has helped brand Mashaei's campaign as a Persian “spring.” Such nationalistic language and imagery is anathema to Iran's conservative clergy, who view Iran's pre-Islamic past as a time of “ignorance” and barbarity.

Of course, Ahmadinejad's presidency has been a disaster not only for Iran, but the Islamic Republic as a political system. His economic policies have resulted in mass unemployment, high inflation and the devaluation of Iran's currency. Iran's nuclear policy, which Ahmadinejad once called a “train without brakes,” has only hurt Iran. Yet despite his failures, Ahmadinejad has been a persistent challenger of the political status quo in Tehran.

For all their grandstanding, it is not clear whether Ahmadinejad and Mashaei seek real reforms in Iran. They may view Iran's ossified political system to be in need of fresh air, but like the reformists before them, Ahmadinejad and Mashaei dare not shake the system too strongly. Regardless of the “spring” campaign, both men are still part of the political system that gave birth to their ambitions. They may have lost the trust of the Supreme Leader, the Revolutionary Guards and the clergy, but they have not won the trust of Iran's middle class and intelligentsia either. The disputed 2009 presidential election, during which the Iranian regime met the protestors' legitimate demands with brute force, damaged Ahmadinejad and Mashaei's brand as an alternative to a corrupt regime.

Furthermore, Ahmadinejad and Mashaei do not always act out of political conviction; in many ways they are not much different than the system they critique. For example, Ahmadinejad often complains of the economic “mafias” ruling the country, but he and his allies have also been associated with mass corruption and under the table deals. Ahmadinejad may realize that the system is in trouble, but he is still willing to benefit from it personally.

Neither Ahmadinejad nor Mashaei will be the political “messiahs” many religious and secular Iranians long for. Much like Khatami and the reformists, figures like Ahmadinejad are willing to challenge the system only to a limited degree.

Yet Ahmadinejad may have been quite beneficial to those who seek a more democratic and secular Iran. Not only has his presidency weakened the Islamic Republic, but his “spring” campaign will tug at the strings that hold the system together. Ahmadinejad and Mashaei are not harbingers of the Persian Spring, but they may yet pave the way for fundamental change by fueling political instability.

This commentary originally appeared on U.S. News & World Report on May 14, 2013. Commentary gives RAND researchers a platform to convey insights based on their professional expertise and often on their peer-reviewed research and analysis.