Book Review: 'Return of a King: The Battle for Afghanistan, 1839–42' by William Dalrymple 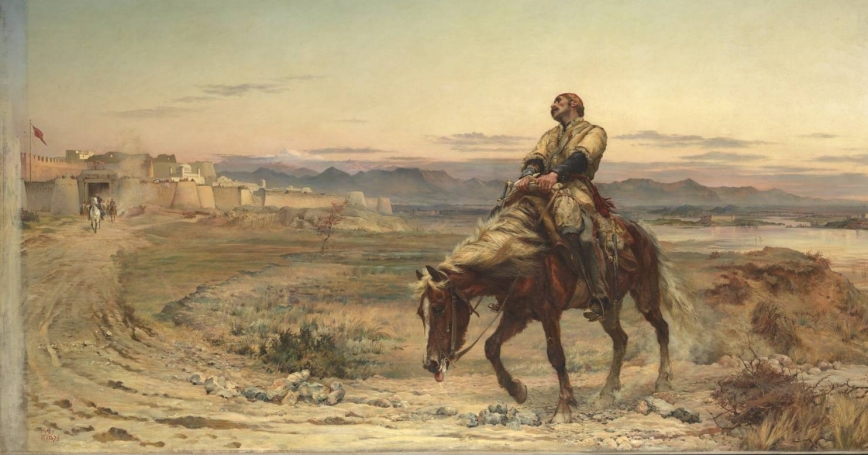 'Remnants of an Army' by Elizabeth Butler

The archetypal image of the first Anglo-Afghan war (1839–42) is best captured in a haunting painting by Victorian artist Lady Elizabeth Butler. Titled “Remnants of an Army,” it depicts William Brydon, an assistant surgeon in the British East India Company Army, approaching the British fort in Jalalabad on horseback following the ignominious 1842 British retreat from Kabul. The painting is searing. Fatigued and half-dead, Brydon clings to his dying steed, whose parched tongue droops toward the ground in utter exhaustion. Darkness begins to envelop the sullen and lifeless landscape, a metaphor for the ominous British ending to its first Afghanistan excursion.

Against this backdrop, the eminent British historian William Dalrymple turns to that war in “The Return of a King,” a well-researched and lucidly written account of the period. Dalrymple makes an important contribution by including recently discovered Afghan accounts of the war, which provide helpful local context.

The book traces the mounting British interest in Afghanistan as part of the “Great Game,” the balance-of-power competition between Britain and Russia for influence in the region. Dalrymple spices up the early chapters with new information on espionage in Afghanistan, including the cloak-and-dagger rivalry between the British diplomat and erstwhile spy Alexander Burnes and the Russian Ivan Vitkevitch.

Concerned about Russia's involvement in Afghanistan and the potential threat to India, the British sent an invading army in 1839 to overthrow Afghan leader Dost Mohammad and install Shah Shuja in his place. Shah Shuja was a Pashtun leader from the Popalzai tribe, to which Afghanistan's current president, Hamid Karzai, also belongs. Contrary to some historical accounts that portray Shah Shuja as an unpopular British stooge, recently unearthed Afghan accounts suggest he was more highly thought of. As Dalrymple contends, “It is clear from the Afghan sources that many of the participants [in the revolt against the British] saw themselves as rescuing the Shah from the gilded cage into which it was believed the British had locked him for their own ends.”

The British were initially successful in installing Shah Shuja and stabilizing the region. But, as Dalrymple describes, they made several fatal mistakes. The first was being grossly naive about the local attitude toward them. One of the first indications of resistance occurred in May 1840, when a British column marching from Kandahar to Ghazni was attacked by 2,000 Ghilzai horsemen. Durrani and Ghilzai Pashtuns soon began to rise up against the British in Helmand and Qalat. In August 1841, a few months before the British retreat, British envoy William Hay Macnaghten brushed aside intelligence reports that the security situation was rapidly deteriorating.

Second, the British misjudged the war's cost. By February 1841, the head of the British accounts department in Calcutta wrote to Lord Auckland, the governor general of India, that “ere six months elapse, the treasures of India will be completely exhausted.” London gave Auckland strict instructions to train an Afghan national army that would allow the British to withdraw their troops to India.

This financial pressure led to a third critical mistake. Macnaghten diverted resources away from tribal leaders and toward building a professional standing army, thus removing Shah Shuja's principal means of patronage. Slashing the payments was catastrophic, Dalrymple argues, because they were “the glue that cemented the local and regional tribal leaders' loyalty to the regime at the center.”

By the fall of 1841, Afghan religious leaders began calling for jihad, or holy war, against the British. The situation in Kabul notably worsened in November, when British official Alexander Burnes allegedly had an affair with an Afghan slave girl. Her owner peremptorily demanded her back from Burnes's residence, only to be beaten and thrown out of the house. “Overnight,” Dalrymple writes, “every village turned hostile.”

A broad-based revolt against the British quickly consumed Kabul, pinning down British forces and civilians in several cantonments. Perceiving the gravity of the situation, Macnaghten cut a deal with the rebels and agreed to leave. The timing couldn't have been worse. It was January, and Kabul was suffering from sub-zero temperatures. On Jan. 6, 1842, the British commenced their retreat. The force, which numbered more than 8,000 soldiers and included a large contingent of Indian sepoys and camp followers, was excoriated as it battled through biting cold, knee-deep snow and apoplectic tribesmen. Some died from the extreme cold. But most died at the hands of Afghan sharpshooters, who picked apart the force by firing at it from behind rocks, on horseback, and through daring ambushes and raids.

While Dalrymple's account of the British retreat is masterful, his effort to generate lessons for today is at times simplistic. He argues that despite some obvious differences, the “same tribal rivalries and the same battles were continuing to be fought out in the same place 170 years later under the guise of new flags, new ideologies and new political puppeteers.” This goes a bit far. Massive social and political changes in Afghanistan make it thorny to pull many lessons from the first Anglo-Afghan war.

In addition, Dalrymple's prognosis of the situation today is bleak. When he visited Kabul to write the book in 2009 and '10, he was dispirited with the state of the city. “As we headed through the capital,” he writes, “evidence of the failure of the current occupation lay all around us. Kabul remains one of the poorest and scrappiest capital cities in the world.” But for those, including myself, who spent time in the city not long after the 2001 overthrow of the Taliban regime, Kabul is a vastly different place today. So is Afghanistan. Economic conditions have improved — and not only because of the war economy. Health metrics have drastically risen from appalling levels during the Taliban years. Life expectancy for both men and women has increased by three years since the Taliban era, and the infant mortality rate has dropped from 95 to 73 per 1,000 live births. Education has also improved. Primary-school enrollment increased from 749,360 pupils in 2000 to more than 5 million in 2010. Despite a litany of problems, Afghan society is better off today than a decade ago. And Afghans in rural and urban areas are now better connected to each other — and the world — than ever before.

If there is a lesson from the first Anglo-Afghan war, it may be the need for sober analysis. The war was not as disastrous as it has been portrayed, including in the disconsolate painting by Lady Butler. Moreover, the British were involved in two more excursions in Afghanistan, each more successful than the first. And the British ultimately achieved their primary objective: an Afghan buffer state resistant to Russian domination, a success that lasted until the late 1970s. The final chapter of today's struggle in Afghanistan is far from over. Let's not write its ending too soon.

Seth G. Jones is associate director of the International Security and Defense Policy Center at the Rand Corp. and the author of “In the Graveyard of Empires: America's War in Afghanistan.”

This commentary originally appeared in The Washington Post on June 21, 2013. Commentary gives RAND researchers a platform to convey insights based on their professional expertise and often on their peer-reviewed research and analysis.