N. Korea Could Fall Faster Than We Think 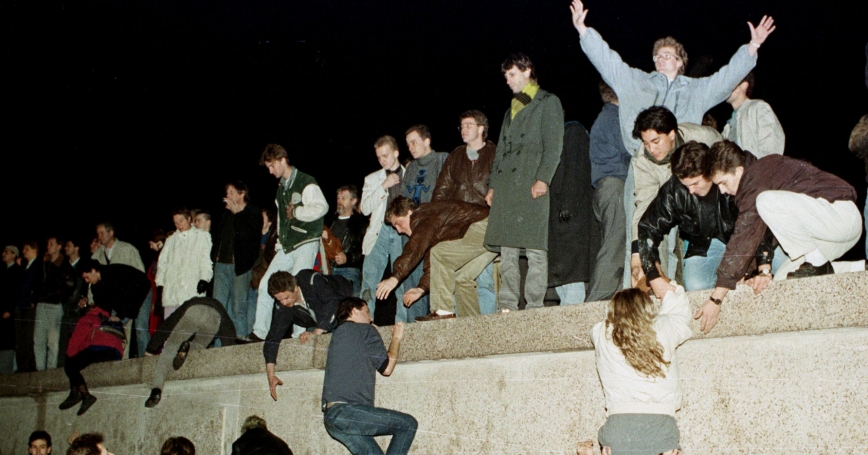 East German citizens climb the Berlin wall at the Brandenburg Gate as they celebrate the opening of the border November 10, 1989

On Oct. 7, 1989, members of the East German Politburo looked on approvingly as sharply dressed soldiers and shiny military hardware paraded by them in a gaudy display of military might to mark the 40th anniversary of the German Democratic Republic.

To the world, the 1989 celebration may have looked no different than any of the countless East German military parades that had come before it. But inside East Germany, this one was different. That night, demonstrations demanding political reform spread to the capital for the first time. Whispered calls for democracy were becoming shouts. Whether the rest of the world knew it or not, the days of the German Democratic Republic were numbered.

Within weeks, the Berlin Wall fell. Less than a year later, agreements for the reunification of East and West Germany were signed. And just like that, there was one fewer communist nation threatening Europe.

When it comes to ostentatious displays of military might these days, no one outdoes North Korea, where parades are only the beginning. When leader Kim Jong-un wants a macho show of military strength, he's likely to order nuclear tests, or rocket launches, or the firing of short range missiles into the sea as he did this week.

What the former East Germany and North Korea have in common is that they both have relied on shows of military might to divert domestic dissent while propping up regimes that face enormous challenges, both internal and external. Could North Korea collapse with as little warning as East Germany did 24 years ago? It's possible.

The United States, South Korea and their allies would be well advised to factor in the possibility that North Korea could collapse in a fit of revolt and economic decay at any time, just as East Germany did.

South Korean President Park Geun-hye has made clear her hopes for talks at some point between Seoul and Pyongyang to prepare for peaceful coexistence and perhaps even unification over the coming decades. But she has said little about how South Korea might deal with an early collapse of the North. A sudden collapse is possible in the coming years and could create regional chaos and impossible burdens on the road to reunification unless South Korea and its allies are better prepared.

Should Kim Jong-un be assassinated and a successor government fail to arise from the likely factions, South Korea and its neighbors would find themselves dealing with a humanitarian crisis of historic proportions. In the aftermath of a collapse, hunger would likely be the immediate urgency and food the most valued commodity. South Korea should make it clear to North Koreans that it is creating stockpiles of food that will be available in the event of a collapse, just as the West German's offered “greeting money” to East Germans during the unification process.

At the same time, South Korea will have to deal with a broad range of other issues, like securing North Korean weapons, keeping its massive military appeased, and dealing with the remnants of Kim Jong-un's regime.

How these huge issues are resolved will depend largely on how invested the North Korean people are in becoming one with the south. In the divided Germany of the late 1980s, virtually all Germans thought they would be better off if unification occurred. South Korea should be working toward creating this same kind of feeling of solidarity between its people and those of North Korea. If the North Korean people oppose unification, it may be impossible to secure the North, aborting the unification process. Once aborted, unification may never happen ― there may only be one chance.

South Korea has been successful in recent years in establishing a national brand that is cultural, economic and political. It includes music and technology and all the things South Korea is known for around the world. Making this brand more inclusive of all Koreans would be a good place to start creating a shared view of Korean success.

South Korea should seek to communicate to the North Korean people, and especially the elites, how life after unification will be in their best interest. They will share in the Korean economic plenty, have broad access to education including college, and only those guilty of serious human rights violations will be subjected to judicial punishments. While such offers may seem overly generous, they may be necessary to secure North Korean support for unification.

South Korea also should resume humanitarian aid to North Korea, something President Park has endorsed. But aid should be targeted at specific counties suffering serious starvation, and delivered in ways that make South Korean assistance very clear. In doing so, the South should communicate to the North Koreans that it is not an enemy, but instead a brother who is providing help. Resumption of humanitarian aid could go a long way toward warming the discourse and could lead to negotiations on key issues like reopening the shuttered Kaesong Industrial Park.

At the same time, South Korea should be talking more about the human rights principles it respects to drive home to North Koreans another advantage of unification under democratic principles.

Some of this kind of unifying language found its way into the joint declaration issued by the United States and South Korea during President Park's recent summit with President Obama in Washington: “We pledge to continue to build a better and more secure future for all Korean people ... (and to work toward) peaceful reunification based on the principles of denuclearization, democracy and a free market economy.”

It could happen sooner than the world thinks.

This commentary originally appeared in The Korea Herald on June 2, 2013. Commentary gives RAND researchers a platform to convey insights based on their professional expertise and often on their peer-reviewed research and analysis.