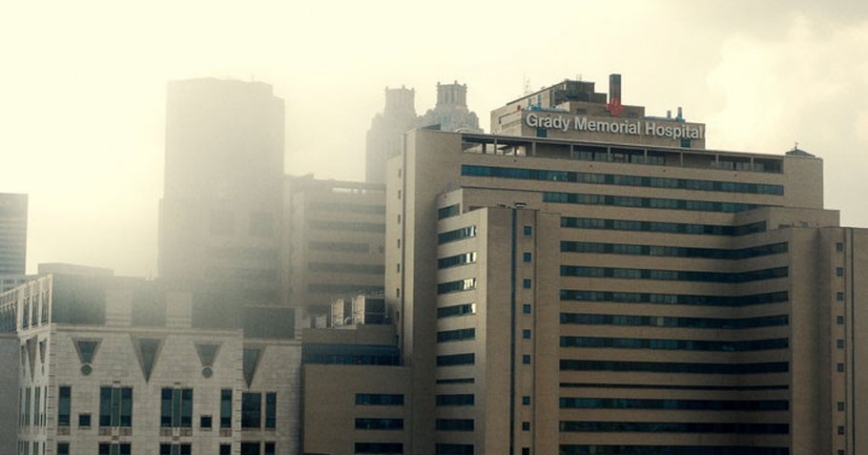 In the past 12 years, several of our nation's most storied public hospitals have closed, including DC General (2001), New Orleans's Charity Hospital (2005), and Martin Luther King, Jr. hospital in Los Angeles (2007). When Atlanta's Grady Memorial Hospital was featured on the front page of The New York Times on Jan 8, 2008, it was widely assumed it would be the next to go. However, at its darkest hour, Grady received help from an unexpected quarter.

In the June issue of Health Affairs, a young physician, Dr. Kate Neuhausen, describes how she and other leaders of a little-known student organization mobilized hundreds of health professions students from around the state of Georgia to join the fight for Grady's survival. It is difficult to overstate how perilous the hospital's situation was at the time. Because Grady provides such a disproportionate share of uncompensated care in the state of Georgia, it would have been impossible for metro Atlanta's hospitals and private health care providers to absorb the sudden loss of more than 900 inpatient beds; the highly specialized trauma, burn and psychiatric services Grady provides; or the displacement of tens of thousands of inpatient days and hundreds of thousands of outpatient visits. The resulting social, medical and financial upheaval would have sent shockwaves throughout the region—the economic engine for the state and a vital financial, commercial and transportation hub for the Southeastern United States.

Fortunately, Atlanta's business community and philanthropies grasped the gravity of the situation. So did Georgia's governor, the leaders of Georgia's General Assembly, the Commissioners of Fulton and DeKalb Counties, the appointed members of the Hospital Authority that ran Grady, the leadership of Emory University and Morehouse School of Medicine (which provides the hospital's medical staff), Grady's employees, and its patients. But each group had a different concept of what needed to be done. Urban-rural, partisan and racial politics came into play. Time was running out.

The crucial role of HealthSTAT. This was the moment when hundreds of medical, nursing and public health students from around the state joined the fray. Operating under the banner of their own organization, they swiftly mounted a sophisticated media and advocacy campaign the likes of which Georgia had never seen. Their efforts transformed the debate from a struggle for control of a large but failing hospital (and the many jobs it supported) to a fight to define the future of health care in Georgia.

Kate's group was beholden to no one. The organization—Health Students Taking Action Together, or HealthSTAT—is an independent 501c(3). Thanks to a small grant from the Healthcare Georgia Foundation, and some additional contributions from supportive medical school faculty and friends, it was financially independent. Nobody could tell them what they could or could not do. They were an autonomous force.

Kate's essay describes the subsequent campaign. Although her narrative largely documents how HealthSTAT used a wide range of techniques and modern technology to engage the public and win over skeptical officials, the chief value of her story comes from illustrating how health professions students—the providers and researchers of tomorrow—can influence policymaking today.

The most powerful assets Kate and her colleagues brought to the table were not their numbers or the sophistication of their outreach (although they had both). It was their idealism and urgent desire to influence the shape of the future they would inherit. Because their members came from Morehouse School of Medicine as well as Emory and other Georgia universities, they bridged the racial divide that otherwise threatened to derail any effort to reach agreement. Their message was clear and powerful: “Grady is Vital.” The slogan, which appeared on their campaign buttons, flyers and postcards, applied to Grady's role as the cornerstone of metro Atlanta's health care system and its equally vital role in training the public health, nursing and medical workforce for the state. The public and policymakers responded.

Recently, Creative Loafing Atlanta published a lengthy, 3-part series on the past, present and future of Grady Memorial Hospital. The first article described the extraordinary (and at points, tumultuous) effort to save the hospital. The article did a good job of describing the efforts of local business leaders like Pete Correll, Tom Bell, Michael B. Russell and Bernie Marcus, the engagement of civic institutions like the Robert G. Woodruff Foundation and the Metro Atlanta Chamber of Commerce, and the vocal opposition of community activists; but it failed to mention HealthSTAT. However, those like me who were witnesses to the events know that HealthSTAT's non-stop advocacy, impassioned testimony, and substantive presence at key legislative and county commission votes made a decisive difference.

Challenges remain, but saving Grady was an essential victory. As Dr. Neuhausen notes in her essay, the challenges faced by Grady and other safety net systems are far from over. This is particularly true in states, like Georgia, that have so far rejected the opportunity to expand their Medicaid programs through the Affordable Care Act. Although the Medicaid Disproportionate Care Hospital (DSH) program will continue to provide such hospitals with a measure of relief, states have considerable latitude regarding how widely they distribute DSH funds. It's unclear if recently-proposed reforms to DSH will provide sufficient motivation for states to more precisely target the diminishing funds to hospitals that provide the most indigent care. Pay for performance, another well-intended program, may further penalize hospitals like Grady that routinely treat complex patients with multiple comorbid conditions who lack the financial means, family support, and literacy to consistently comply with their treatment plans.

Notwithstanding these challenges, it is worth considering the disaster that would have unfolded if organizations and individuals holding widely disparate views had not come together to save Grady Memorial Hospital. Today, with our Congress and many state legislatures gridlocked in partisanship, it's important to remember how much can be accomplished when principled individuals set their differences aside to confront a shared challenge. It's also sobering to think how much power the youth of our country could wield if they brought their numbers, talent, and energy to the task. My son is fond of telling me, “Dad, you boomers screwed everything up. It's up to my generation to fix things.” Reflecting on what Dr. Neuhausen and her colleagues helped bring about in 2008, he may be right.