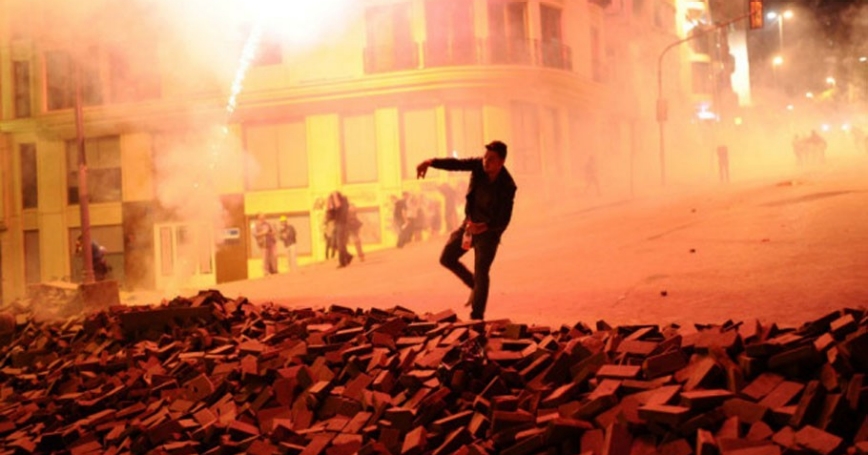 Protestors clash with Turkish riot policemen on the way to Taksim Square in Istanbul on June 5, 2013

The spontaneous protests in Turkey, which began in Istanbul and have spread to over 70 Turkish cities, have raised serious questions about Turkey's political stability and Prime Minister Recep Tayyip Erdogan's leadership.

The demonstrations began as a spontaneous protest against the Erdogan government's decision to build a shopping mall and a replica of former Ottoman army barracks in Gezi Park in Taksim square. However, they have mushroomed into a broad protest that transcends the traditional political cleavage between secularists and Islamists that has dominated Turkish politics in recent years.

The protests reflect a deep-seated sense of political frustration and discontent, particularly among the young and middle class, two groups that have paradoxically been the main beneficiaries of Erdogan's policies over the last decade. These groups are likely to play an increasingly important role in Turkish politics in the future.

The demonstrations have their roots in several closely intertwined factors which have combined to create a near perfect political storm.

The first is the lack of a strong, effective opposition party. The Republican People's Party, the main opposition party, has proven no match for Erdogan's ruling Justice and Development Party (AKP). Over the last 40 years, the former has failed to articulate innovative alternative policies that appeal to a constituency beyond its traditional secular core of voters.

Second, the protests reflect discontent with Erdogan's authoritarian style and behavior. Erdogan runs the AKP with an iron fist and trucks little dissent or criticism. In the early days of power, there were a number of leaders with alternative views who acted as a constraint on Erdogan's authoritarian instincts. But with the elevation of Foreign Minister Abdullah Gul to the presidency in 2007, these alternative voices have gradually been marginalized, leaving Erdogan in sole command, with virtually no internal or external constraints on his political power.

Erdogan's future political ambitions to run for president should be seen in this political context. According to AKP party rules, Erdogan cannot run for a fourth term as prime minister. He is widely believed to covet the job of president, which would allow him to stay in power until 2024, one year after the celebration of the 100th anniversary of the founding of the Turkish Republic by Kemal Attaturk in l923.

The post of president is currently largely a ceremonial position. Erdogan wants to amend the constitution to give the president strong executive powers similar to those exercised by the French president. His plan would fundamentally change the nature of the Turkish political system and has created considerable anxiety, especially among the opposition, who fear that such a move would centralize too much power in the hands of the president and weaken the few remaining checks on Erdogan's power.

Finally, foreign policy concerns have contributed to the growing discontent. Erdogan's support for the Syrian rebels is seen in many quarters as a serious strategic mistake, which has exacerbated risks to Turkish security. This growing anxiety about the deterioration of Turkey's security environment feeds into and reinforces the domestic discontent.

The influence of the once powerful military, the one organization that could exert a serious constraint on Erdogan's exercise of power, has been progressively reduced and brought under strong civilian control.

A decade ago the military might have intervened in the face of the recent mounting social turmoil — or at least threatened to do so, as it did during the run up to the parliamentary elections in April 2007. Instead, it has remained conspicuously silent during the recent protests, leaving civilian leadership to deal with the growing unrest. This is an important reflection of how far Turkey has evolved in the decade since the AKP assumed power.

The long-term impact of the protests heavily depends on how Erdogan responds to the ongoing demonstrations. If the economy remains strong and Erdogan makes some tactical adjustments toward greater openness and transparency, he is likely to be able to weather the storm.

However, if he fails to heed the warning signs implicit in the protests and continues to portray the demonstrators simply as a bunch of "looters," he could face increased political and social turmoil which could seriously constrain his ability to manage the growing domestic and foreign policy challenges facing Turkey in the future.

This commentary originally appeared on U.S. News & World Report on June 14, 2013. Commentary gives RAND researchers a platform to convey insights based on their professional expertise and often on their peer-reviewed research and analysis.