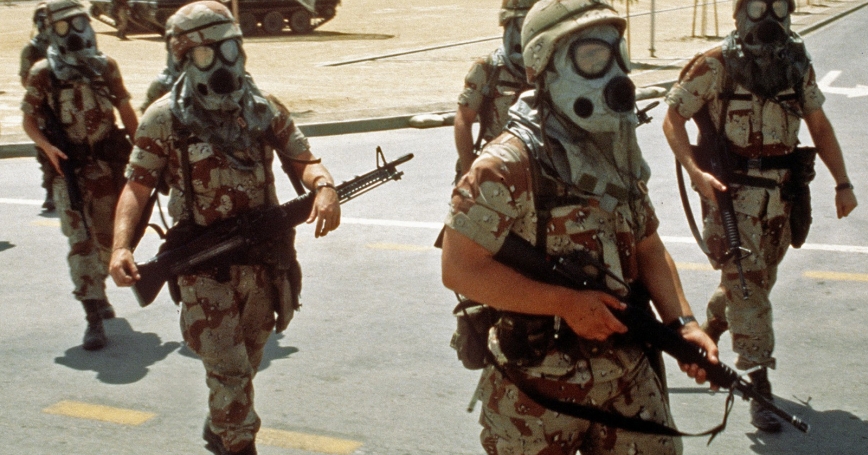 Veterans returning from the 1991 Persian Gulf War began reporting a variety of physical and psychological symptoms, ranging from fatigue, muscle pain, rashes, and diarrhea to cognitive problems and functional impairment. These clusters of symptoms became known as Gulf War Illness (GWI). Despite extensive investigation, causes of GWI have not yet been identified.

A recent New York Times article highlighted a study by scientists at Georgetown University Medical Center suggesting that the symptoms of GWI are biological in nature. The study is just one of many that have focused on Gulf War symptoms. More than a decade ago, the RAND Corporation conducted an extensive review of the scientific evidence behind eight possible causes of GWI: infectious diseases, pyridostigmine bromide, immunizations, wartime stress, chemical and biological warfare agents, oil well fires, depleted uranium, and pesticides.

To put the Georgetown study in context, we interviewed Bernard Rostker and Ross Anthony, both RAND senior economists with expertise on GWI. Rostker formerly served as special assistant to the deputy secretary of defense for GWI and commissioned the RAND study and Anthony is one of the study's lead authors.

What exactly did RAND conclude from its review of the science in this area?

Rostker: RAND looked at the scientific evidence behind possible causes of the symptoms reported by Gulf War veterans. Based on the literature, RAND couldn't identify any definitive cause. The team didn't find any smoking gun. However, they did identify several possible causes that couldn't be ruled out — in particular, pyridostigmine bromide and pesticides — and highlighted the need for further research in these areas. RAND also recommended further investigation into an individual's susceptibility to the multiple occupational hazards on the battlefield.

What new evidence does the Georgetown study bring to the table?

Anthony: Using exercise stress tests as a diagnostic, these scientists discovered that veterans who reported Gulf War-related symptoms had neurological damage in the parts of their brains related to heart rate and pain. They confirmed that there were physical changes in the brain associated with Gulf War-related symptoms. The study had a small sample — 28 veterans who reported symptoms, and a comparison group of 10 veterans without symptoms — so one needs to be careful interpreting the findings.

But doesn't evidence of neurological damage conflict with RAND's conclusions?

Rostker: No, it doesn't. The Georgetown study concludes that GWI is real. RAND never believed that people were making up symptoms. But looking across the whole population of veterans reporting symptoms, RAND could not identify any one factor that could plausibly be a cause. In my role as special assistant, I asked RAND to take stock of what the science at that time had to say about possible causes — it wasn't an investigative study. The Georgetown team makes it clear they aren't trying to explain what caused the neurological damage they identified.

Are there dimensions of the new study that particularly complement the general knowledge base that RAND's study established?

Anthony: It's noteworthy that the researchers identified two clusters of symptoms. To me this suggests that the battlefield is a dirty place and exposure to chemicals and other agents could affect different people in different ways. As is the case with allergies, people may be more or less susceptible to the problems relating to GWI depending on where they are physically and mentally. As Rostker noted, one thing RAND recommended was further research on how susceptible a given individual may be to the “dirty” battlefield.

Some clinicians believe that Gulf War symptoms resulted from combat stress — that they were psychological rather than physical in nature. But this study shows clear biological evidence.

Rostker: RAND never suggested that the symptoms were psychological; the team just could not identify a physical cause, based on the available evidence.

Anthony: In addition, multiple studies, including many conducted at RAND, have shown that mental health issues such as stress have real physical consequences, but that the degree of these effects varies greatly from individual to individual as well as with the degree and length of exposure. So in a way, the dichotomy between physical and psychological causes is probably not appropriate in this case. In the end, as Rostker pointed out and the Georgetown study implies, there could be multiple causes and even multiple separate sets of symptoms resulting from service in the first Gulf War, which neither RAND nor the Georgetown study has been able to fully explain.

Bernard Rostker and C. Ross Anthony are both senior economists at the non-profit, non-partisan RAND Corporation.