Halting Aid to Egypt Over Military 'Coup' Would Hurt US Interests 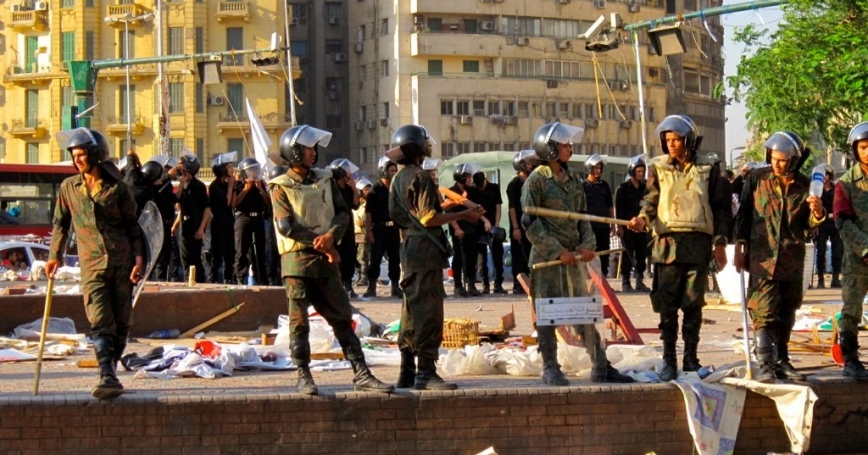 When Egyptians took to the streets demanding the ouster of President Morsi, the Egyptian military could have intervened with a scalpel. Instead it used a hammer. Less than a week into the intervention, the military has deposed the president, taken senior members of the Muslim Brotherhood into custody, suspended the constitution, dissolved the upper house of parliament, taken control of the country's flag ship newspaper, intimidated independent media, and escalated violence against pro-Morsi demonstrators.

Thus far the US administration has assiduously avoided the term “coup” to describe the military's actions. This is a conscious effort to avoid tripping the legal requirement that the US suspend aid to countries where the military has overthrown democratically elected governments. Not surprisingly, many disagree with the administration's approach. Critics advocate for acknowledging that what occurred in Egypt is a coup and shutting off the more than $1.5 billion that Egypt receives annually from the US government.

Unfortunately, this position fails to appreciate the limits of the leverage Washington derives from its aid to Cairo and the potential consequences of halting it.

The United States has provided several streams of aid to Egypt over the past three decades. The largest stream is the $1.3 billion in Foreign Military Financing that is given to Cairo annually to acquire fighter jets, tanks, helicopters, and the spare parts and maintenance each piece of equipment requires.

A second smaller stream is the so-called Economic Support Funds, which since the 2011 Revolution, have been allocated to pay down Egypt's more than $2.5 billion in debt to the US. In other words, those funds are delivered in the form of a self-addressed check — a form of debt forgiveness that the US can use as a kind of “carrot.” Giving money to Egypt to pay down its US debt in this form allows the US to hold Egypt to International Monetary Fund conditions that would put its economy on a more stable path.

And finally there are smaller pots of money the United States allocates for democracy promotion, professional military education, and other programs.

Egypt is currently the fifth largest recipient of US assistance worldwide. This leads many policymakers to assume it is a great source of leverage for the US to influence the Egyptian government's decisionmaking. This view overstates what the US can accomplish by threatening to withhold aid. For starters, US aid to Egypt pales relative to the $12 billion in aid the Arab Gulf states of Saudi Arabia, the United Arab Emirates, and Kuwait have pledged to Cairo over the past few days.

The most important limit on the leverage that Washington derives from its aid to Cairo is that in the past 25 years, assistance has fallen tenfold in relative terms. In 1986, US aid to Egypt was equivalent to about 7 percent of Egypt's GDP. Today, it stacks up as less than 1 percent of Egypt's economy.

Second, Egypt uses the military assistance it receives to purchase American hardware. Halting aid to Egypt means cutting off money that is ultimately captured by US defense contractors that produce the F-16s, M1 Abrams tanks, and Blackhawk helicopters that Egypt is acquiring.

As for the economic assistance, its impact is negligible. Disbursing the aid means the US can cancel the equivalent amount of Egypt's debt whereas cutting off the aid means the debt remains outstanding but with no guarantee it will be repaid and no way to incentivize Egypt's compliance with IMF conditions for its economic recovery.

Finally, most Egyptians view US aid as part of a quid pro quo for Egypt's conclusion of a cold peace with Israel. In that sense, the aid is a reward for steps already taken, making it difficult to derive additional leverage so long as Egypt does not renege on its treaty obligations.

Those that advocate for suspending aid are also missing the broader strategic picture. The US has interests that include regional stability, military access, and energy security. Egypt plays a role in protecting these interests by maintaining relations with Israel, granting over-flight and expedited naval transit, and supporting the security of America's Arab Gulf partners. So the leverage runs both ways. Like it or not, Washington and Cairo need one another.

This does not mean the US shouldn't consider changes to the way assistance to Egypt is managed. There is a lot that lies between the status quo and shutting off the tap.

For example, the US could shift the size of the aid pie that goes to the Egyptian military and the slice that goes to economic assistance. As currently configured, more than 80 percent of total assistance is military in nature. And within the military aid, the US could put more emphasis on programs like professional military education that support subordinating the military to civilian control. This is clearly a more pressing need than subsidizing Egypt's acquisition of prestige systems like the F-16 and M1 Abrams tanks that are designed to deter a legacy threat. After all, this equipment is designed to face an adversary — Israel — that Egypt no longer faces.

These are not headline-grabbing changes. But they are potentially far more effective than threats to cut off aid altogether. It's time US policymakers had a more complete conversation about assistance to Egypt. Doing so will mean building from an understanding that the policy choice is not a binary one — to provide or not to provide aid. The rationale for assistance is rooted in real strategic considerations.

This commentary originally appeared in Christian Science Monitor on July 11, 2013. Commentary gives RAND researchers a platform to convey insights based on their professional expertise and often on their peer-reviewed research and analysis.