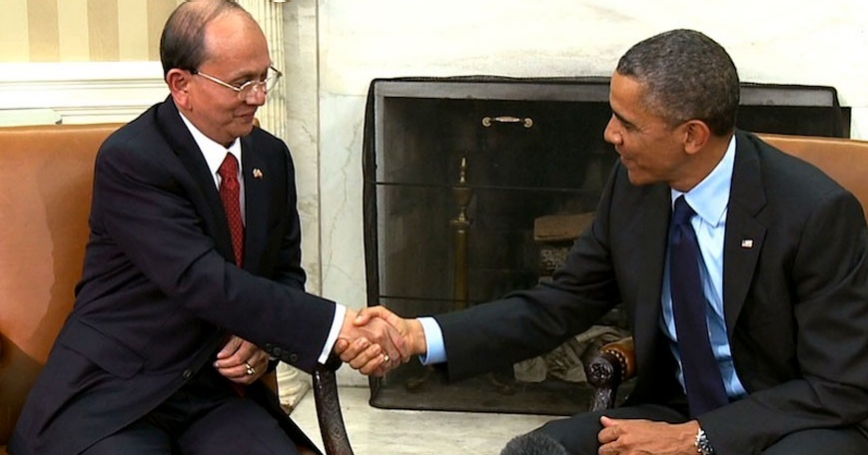 photo from video on whitehouse.gov

The rapprochement between the United States and Myanmar (Burma) has proceeded at a blistering pace. A year ago, the two countries did not even have ambassadors in each other's capitals. In May, President Thein Sein became the first leader from Myanmar to visit the White House in nearly a half-century.

But has Barack Obama's administration been too quick to embrace what was, until recently, one of the world's most repressive regimes? Or, on the contrary, is decisive US support essential to Myanmar's fledgling reform process?

Until the recent opening, Myanmar, which gained independence in 1948, had been ruled by a secretive military junta since 1962. As recently as 2010, the regime held elections so blatantly rigged that the main opposition party refused to participate. But in 2011, shortly before assuming the presidency, Sein, a general who served as Prime Minister under the junta, began to take steps that impressed even the most skeptical observers. Unlike the token gestures of reform offered by previous rulers, Sein's actions appeared substantive and meaningful.

One important change was the release of hundreds of political prisoners, including the regime's most prominent opponent, Aung San Suu Kyi, who had been under house arrest for nearly 15 years. Moreover, Sein initiated a dialogue with Suu Kyi, a Nobel Peace Prize winner and the leader of the National League for Democracy (NLD), about a transition to civilian rule.

The subsequent elections bolstered hope for Myanmar's democratic future. In 1990, when the NLD won 81% of the seats in Parliament, the junta promptly voided the results and arrested Suu Kyi. In 2012, the NLD won 43 of the 44 seats that it contested, and the military accepted Suu Kyi as the reform movement's legitimate leader.

Furthermore, Sein has reached out to the Karen, Kachin, and other ethnic minorities — groups whose members have suffered decades of official persecution and mistreatment. And efforts to open Myanmar's economy to international trade have transformed the country's commercial capital, Yangon (Rangoon), with businesspeople now arriving on direct flights from at least a half-dozen foreign capitals and once-empty streets now congested with imported cars.

But, in some areas, reform has been painfully slow. In fact, when it comes to human rights and minority protections, Myanmar may even be regressing. The liberalization process has exposed the country's long-standing religious divisions, leading to a wave of sectarian violence aimed primarily at the minority Muslim community. From coastal Rakhine to inland towns like Meiktila and Tatkon, Buddhist monks have incited violence against Muslims (and sometimes vice versa), with local officials often tacitly permitting religious bloodletting.

At his meeting with Sein in Washington, DC, Obama condemned the violence against Myanmar's Muslims, which has displaced many of them. On the same day, the US State Department released its annual report on religious freedom, in which Myanmar was included among the world's eight worst offenders.

This has not always been the case. Although Myanmar is an overwhelmingly Buddhist country, dozens of religious and ethnic communities have long lived there side by side. In the heart of Yangon, the golden dome of the Sule Pagoda stands just across the street from the minarets of the Bengali Mosque.

In order to achieve the peace and stability needed to consolidate Myanmar's democratic transition, both Sein and Suu Kyi should do more to establish themselves as representatives of all of Myanmar's citizens. Muslims need to be assured of their personal security and guaranteed full civil rights.

The Obama administration has staked significant political capital on the wager that Myanmar's promise may finally bear fruit. And, indeed, the rate of change in Myanmar over the last two years has been nothing short of remarkable.

But, as Sein acknowledged at the White House, Myanmar's government “has been encountering obstacles and challenges along [its] democratization process.” How it copes with these problems — and those that have yet to arise — will determine whether America has given its blessing prematurely.

Jonah Blank is a senior political scientist at the RAND Corporation, and a former policy director for South and Southeast Asia on the staff of the US Senate Foreign Relations Committee.