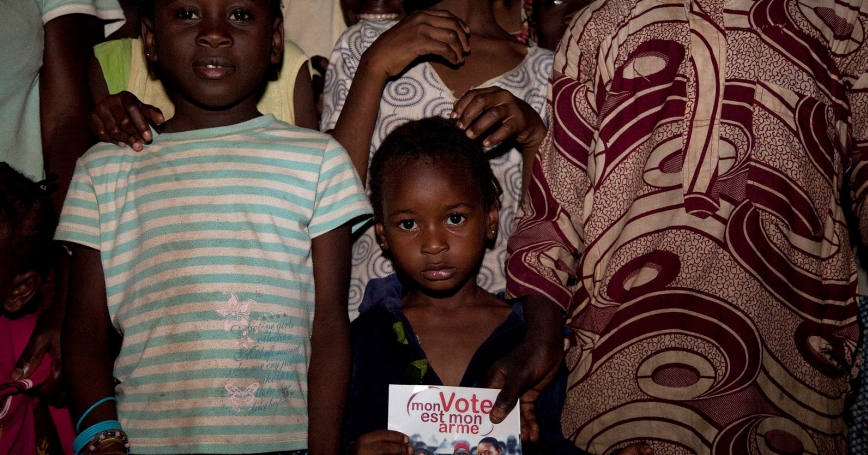 Malians attending a concert for their upcoming elections

photo by UN Mission in Mali

Remember Mali? That desperately poor country in West Africa that seized international attention last year when Islamist rebels allied with an al-Qaida affiliate — al-Qaida in the Islamic Maghreb — seized control of the country's northern half. Then, this January, they launched an invasion of the south only to be stopped by French troops. Now, with the French still hunting down militants, Mali is preparing for a presidential election on July 28.

The election is crucial, although not for the reasons that drove outsiders, including the United States, to urge Malians to rush to vote so soon. Many of these outside observers are focused on technical election procedures, which are regarded as prerequisites for providing rote foreign aid and security assistance.

Free and fair elections are important, to be sure, but what Mali really needs is a leader who is dedicated to democracy, unity and reform of Mali's politics and institutions.

The international community — which has pledged $4 billion in aid — believes assistance should not be granted to "illegitimate" governments unsanctioned by free and fair voting. But this approach focuses too much on the process of elections rather than their substance — that is, on what elections should achieve for the Malian people. It also reinforces the view that what Mali needs is massive foreign aid. For Mali to succeed, such aid may be necessary, but it is hardly sufficient.

The international community defines a successful election as one that is not riddled with so many problems that it is unacceptable to the electorate and the donor community. In Mali and elsewhere, the U.N., donor nations, and other international bodies spend considerable sums of money to check all the boxes of the technical requirements of guaranteeing that a vote is free and fair. In Mali's case, voting will be particularly tricky in the north. Thanks to France, AQIM is — for the moment at least — out of play. But homegrown militants are still around, and many of the Tuareg, Arab and other minority communities that inhabit the north are uneasy about the government in Bamako, Mali's capital. Many Malians and outside observers fear that insecurity, particularly in the Kidal region, the epicenter of Tuareg militancy, will impede voting there, which could make Tuaregs see the election results as illegitimate.

But Mali has even bigger problems than Kidal. One is Mali's feckless army, which is riddled with self-destructive internal divisions and contemptuous of civilian authority. Even more fundamental is the country's profound division between north and south. Southern Mali has shown scant interest in understanding the northerners or integrating them into the nation; northern Malians have little reason to trust the south or see politics as anything other than a zero-sum game.

As for Kidal, less than half of a percent of Mali's roughly 15 million citizens live there, according to the 2009 census. And the region's Tuaregs, which represent a minority of Mali's Tuareg population, are divided among rival factions. In other words, Kidal's potential as a spoiler is overstated. Election-related problems in Kidal are unlikely to have much effect on how Tuaregs perceive the election and should not be regarded as indicative of what "the Tuaregs" think.

Good elections do not necessarily bring good democracy. (That's a cliché, to be sure, but still one worth repeating.) Under its now deposed former president, Amadou Toumani Touré (widely known as ATT), Mali looked like a model democracy. But ATT stood by as his country collapsed around him. There's little sign that anyone in Mali regrets ATT's departure.

Legitimacy in a nascent democracy like Mali accrues over time; it is not simply conferred by an election. Lasting democracy requires decent governance and results that make a difference for ordinary citizens, not just winner-take-all results at the polls. It also requires an idea of the nation with which even the northern minorities can identify, meaning that Mali needs leaders who can embrace that idea and help do the hard work of turning it into reality. Mali needs a leader who can foster reconciliation and move the nation — everyone included — forward. Without a leader dedicated to unity, transparency and democracy, all the aid and security assistance the United States and other well-intentioned outsiders provide will be squandered, as it was under ATT.

So who wins on July 28 (or during a run-off round scheduled for August 11) matters much more than the electoral process itself. If Mali's election brings improvements in its democratic political culture and leadership, or at least fosters a constructive national dialogue, it could make all the difference. That would be a successful election. An election that merely clears the way for the United States to open its coffers and resume business as usual with the Malian military would be a failed one.

This commentary originally appeared on U.S. News & World Report on July 24, 2013. Commentary gives RAND researchers a platform to convey insights based on their professional expertise and often on their peer-reviewed research and analysis.