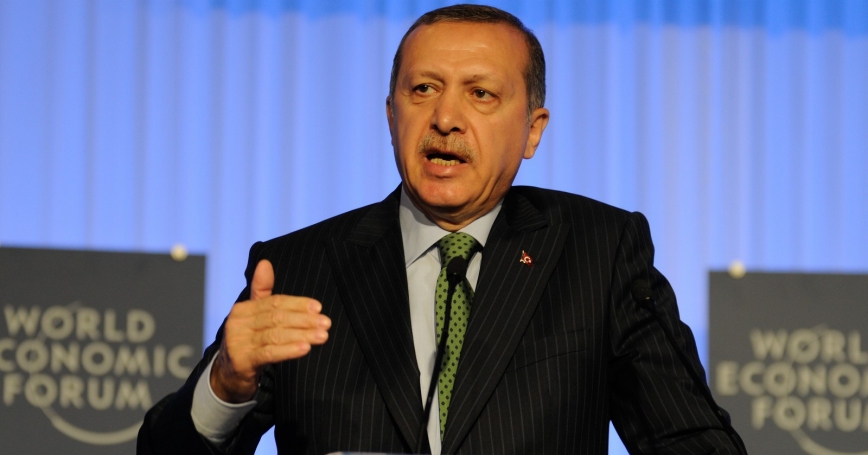 Erdogan speaking at the World Economic Forum on the Middle East, North Africa and Eurasia in Istanbul, June 2012

The military coup deposing Egypt's first democratically elected president, Mohammed Morsi, has sparked an important shift in the regional balance of power in the Middle East. Morsi's ouster deals a strong blow to the Turkey-Qatar-Egypt "pro-change" axis and to Turkey's hopes of playing a larger role in the Middle East.

Turkey is the big loser in the changes in Cairo. Its ruling Justice and Development Party (AKP), which has Islamic roots, has cultivated close ties to the Muslim Brotherhood in Egypt and sought to build a strong strategic relationship with the country.

The Erdogan government has strongly condemned the coup and insisted that Morsi be reinstated through a democratic process. There is little likelihood of this happening, however. Most Arab governments, especially the monarchies in the Gulf, have welcomed the coup, seeing it as a barrier to similar democratic changes in their own countries.

Turkish reaction to Morsi's ouster has been heavily influenced by Turkey's own experience with military rule. The Turkish military has intervened four times since World War II to oust democratically elected governments. As Mustafa Akyol, one of Turkey's most perceptive young journalists, has aptly noted, Turks are interested in Egypt because when they look at what's happening there, they see themselves. Having struggled hard to curtail the power of the military, the AKP is loath to condone an action that could be used to legitimize a similar intervention in Turkey.

The interim government in Cairo's approach to regional security is likely to be marked by important changes. One can expect to see a tougher policy toward Hamas and a strengthening of Egypt's cooperation with Israel.

Egypt's ties with Saudi Arabia are also likely to strengthen. Saudi Arabia and the United Arab Emirates have been quick to try to capitalize on the change in Cairo, offering large aid packages to help the new Egyptian regime deal with its mounting economic problems. They see Islamist movements like the Muslim Brotherhood as a threat to monarchal legitimacy and seek to preserve the old authoritarian political systems.

Two years ago, Turkey seemed ideally placed to reap the benefits of the changes unleashed by the Arab Spring. With its emphasis on democracy and high economic growth, Turkey was seen by many Arabs as a potential model to be emulated, especially in Egypt. Prime Minister Recep Tayyip Erdogan and Foreign Minister Ahmet Davutoglu spoke confidently about Turkey as an emerging regional power.

Today the situation looks quite different. The Syrian crisis has exposed the limits of Ankara's ability to shape developments in the Middle East on its own. Erdogan's open support for the Syrian opposition is increasingly seen as a strategic mistake that has damaged Turkey's security and exposed it to new risks.

The influx of some 400,000 refugees has stretched Turkey's capacity to provide shelter and food to the breaking point. The crisis has aggravated the Kurdish issue and given its resolution new urgency. Many Turks fear that the demands for autonomy by the Syrian Kurds could have a knock-on effect, sparking similar demands by the Kurds in Turkey.

Turkey's principled opposition to the coup in Egypt is politically correct but unlikely to have much effect. Most of the regional actors — and a large part of the Egyptian population — feel that the Muslim Brotherhood's return to power would make things worse and appear willing to give the military-installed interim government a chance. Thus, Ankara is likely to find itself hollering in the wind.

Under these circumstances, Turkey would be better served by focusing its diplomatic energy on stabilizing its immediate neighborhood. Top priority should be given to negotiating an end to the nearly three-decade-old insurgency by the Kurdistan Workers' Party (PKK) and to improving ties with Iraq and the Kurdistan Regional Government. Ending the PKK insurgency would be a major contribution to Middle East security that would enhance Turkey's international credibility and could lay the foundation for positive changes in other areas.

F. Stephen Larrabee holds the Distinguished Chair in European Security at the nonprofit, nonpartisan RAND Corporation and served on the National Security Council staff during the Carter administration.

This commentary originally appeared on U.S. News & World Report on July 18, 2013. Commentary gives RAND researchers a platform to convey insights based on their professional expertise and often on their peer-reviewed research and analysis.