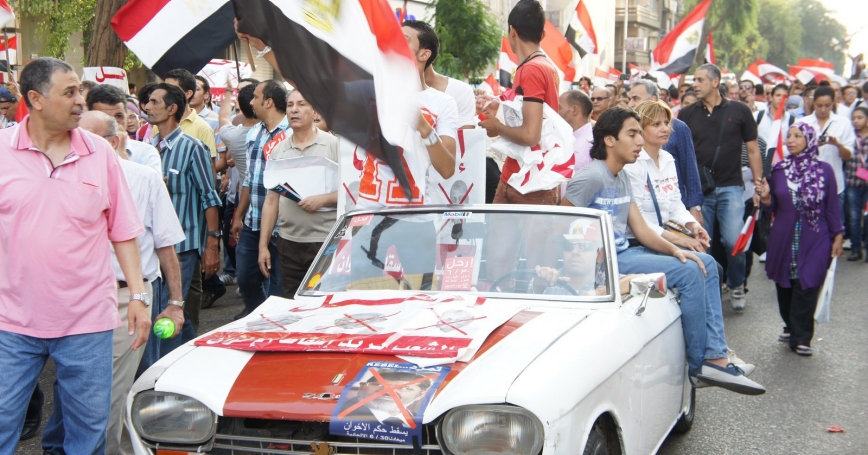 In 2011, it took several rounds of protests before the chanting on the Egyptian street for “bread, freedom, and social justice” morphed into “down with the regime.” This time, the demonstrators had that goal in mind all along. In some ways, this week's events do seem like a sped-up version of the January 25 Revolution. But June 2013 is not January 2011. The calculus of the Egyptian military, for one, is much more complicated. Having intervened once and gotten burned in the process, the generals are likely to be a lot more circumspect this time around.

The Egyptian military is still licking its wounds from the year and a half in which the Supreme Council of the Armed Forces directed Egypt's transition to democracy. Today, Egyptian demonstrators may be yelling irhal (leave) at President Mohammad Morsi, but the military leadership hasn't forgotten that many of the same demonstrators were shouting yasqut hukm al-asker (down with military rule) during the SCAF's stint in power. That is not to say that the military's ultimatum on July 1, in which it gave Morsi 48 hours to meet the protests' demands, is empty. But if it does intervene, expect the military to steer a different course than it did in 2011.

Even before the ultimatum, the Egyptian military had already threatened to inject itself back into politics once in the last few days. In a June 23 address that was widely scrutinized for hints of the military's thinking, Defense Minister Abdel Fattah al-Sisi warned that the military had “a moral, patriotic, and historical responsibility … to keep Egypt from sliding into a dark tunnel of conflict, internal fighting, civil war, sectarian discord and the collapse of state institutions.” At the same time, al-Sisi urged all political forces to engage in a serious national dialog in the week remaining before the June 30 opposition rallies.

Whether because the Muslim Brotherhood doubted the military's credibility or because it thought that the opposition protests would never materialize, the call went unheeded. Instead, Islamists took to the streets in their own show of force. Morsi gave a defiant speech that invited the opposition to a national dialogue, but not before calling out prominent members of it for their refusal to participate in the government and mocking the National Salvation Front (NSF), a coalition of over 30 opposition groups, for expressing far-reaching demands after failing to win a parliamentary majority.

Not surprisingly, the NSF was not pleased. Its leaders responded to the president's speech by reiterating their refusal to talk. Another opposition movement, the Tamarod or “Rebel” campaign, did its colleagues in NSF one better, warning Morsi of a “revolutionary trial” and accusing anyone considering reconciliation with the Muslim Brotherhood of betraying his or her fellow Egyptians. Some politicians, including those with presidential aspirations such as Hamadeen Sabahi, a leader within the NSF, shamelessly courted a military intervention. Just a day before the threatened to intervene, Sabahi asked al-Sisi to honor his June 23 pledge to uphold the will of the people and asked “where are the armed forces?”

The ominous statement that the military issued after June 30 culminated in huge rallies and some violence was similar in style to the communiques through which the SCAF announced its decisions in early 2011. The statement fed speculation that Egypt was headed for another period of military rule. Just like those earlier messages, the communique was read over state television and was filled with platitudes about the Egyptian people and the armed forces. So, too, was it short on details about the military's own plans for moving the country forward.

A key difference, however, is that, after carrying the target of public disappointment on their backs for all of 2011 and half of 2012, the generals had come to this decision point much wearier than they did the first time around. Indeed, the senior officers had breathed a sigh of relief in 2012 when they finally shifted the burden of governance onto Morsi and the Muslim Brotherhood. By letting go of executive power, the military had reverted to the enviable position of being the institution whose support all other political actors courted. Even under a Muslim Brotherhood-led executive, the military still exerts significant control over national security affairs, it retains its prerogatives over budgetary decisions and internal promotions, and it continues to enjoy the tax breaks that help make its economic enterprises profitable....

Jeffrey Martini is a Middle East analyst at the RAND Corporation.

This commentary originally appeared on Foreign Affairs on July 1, 2013. Commentary gives RAND researchers a platform to convey insights based on their professional expertise and often on their peer-reviewed research and analysis.