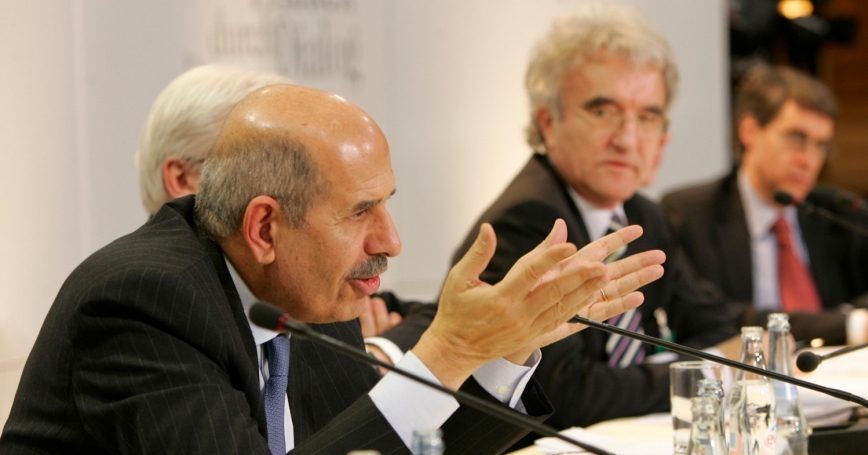 There has been much hand wringing in Washington and European capitals over the growing political crisis in Egypt. The concerns are warranted given the troubling course of developments there. In the space of a month, the Egyptian military has deposed the president, escalated violence against Muslim Brotherhood supporters, clamped down on the media and detained a widening circle of Islamist leaders on specious charges.

But while Egypt really is in trouble, what is needed is not a U.S. signal in the form of an aid cut off or another European mediation effort, it is for Egyptian liberals to stand up and condition their participation in government on genuine national reconciliation.

As the strongest, most cohesive and most popular institution in the country, the Egyptian military has a tendency to run roughshod over its civilian counterparts. But at this moment the generals need civilians to participate in the caretaker government they established. Having directed the transition for the initial eighteen months after the 2011 revolution, the generals understand that directly governing exposes them to public frustration they'd rather not bear.

So it was no coincidence that when the military intervened on July 3, the generals announced their “road map” with civilian political leaders and religious figures at their side. The liberal icon Mohamed ElBaradei was there to lend his support, as were Salafi leaders from the Nour party, in addition to the head of al-Azhar and the Coptic Christian community.

The intended message was clear: this is not your father's military coup. The armed forces are stepping in to rescue the country and with broad support from across society.

Consistent with that narrative, the military quickly instated an interim president drawn from the judiciary, who in turn appointed a government consisting of 34 ministers. It is these three dozen or so officials that put a civilian face on what would otherwise be seen as a military takeover. And among the civilians, none are more important than the new Prime Minister Hazem Beblawi, a widely respected economist, and ElBaradei, the former International Atomic Energy Agency chief and principled oppositionist to the Mubarak regime who is now serving as vice president for foreign relations.

Beblawi's importance stems from his reputation as anything but a political opportunist. A 76-year-old technocrat who briefly served as finance minister in 2011, his participation lends the government an air of competence. And because he's neither partisan nor has political ambitions of his own, Beblawi allows the generals to make the case that what they've established is a national unity government. As for ElBaradei, his participation is meant to assuage the West. Fluent in democracy speak, ElBaradei's participation is a symbol that what occurred on July 3rd was a corrective rather than a return to military rule.

Both Beblawi and ElBaradei earned their reputations as men of conscience the hard way. When Beblawi was finance minister, he resigned his post after security forces killed 25 mostly Coptic Christian demonstrators outside the state broadcasting building. Beblawi's explanation was that a government that fails to provide security for the people ought to step aside. These are meaningful words in the current context when security services have used live ammunition against pro-Morsi demonstrators, killing over 140 in just two incidents since the ouster of the president.

ElBaradei struck a similar tone when he announced his decision not to run for the presidency in 2012. He used the announcement as a platform to criticize the “captain of the ship” — a thinly veiled allusion to the military council then governing the country — “who took command without being chosen by the passengers and without expertise in leading.” ElBaradei added that his conscience would not allow him to run for the presidency except “in the framework of a genuine democratic system that takes democracy as its essence and not just as its appearance.”

These two men, and the 32 ministers that stand with them, have much more influence over the calculus of the Egyptian military than Western leaders. The generals need these men to promote their narrative of having killed democracy to save democracy and to inoculate themselves from the inevitable public discontent that will result from the country's instability and sputtering economy. It is time for the liberals to step up and condition their participation on the politics of inclusion and national reconciliation. These are principles they have pledged to uphold and the test is now.

This commentary originally appeared on U.S. News & World Report on July 31, 2013. Commentary gives RAND researchers a platform to convey insights based on their professional expertise and often on their peer-reviewed research and analysis.