What's Next for the Muslim Brotherhood? 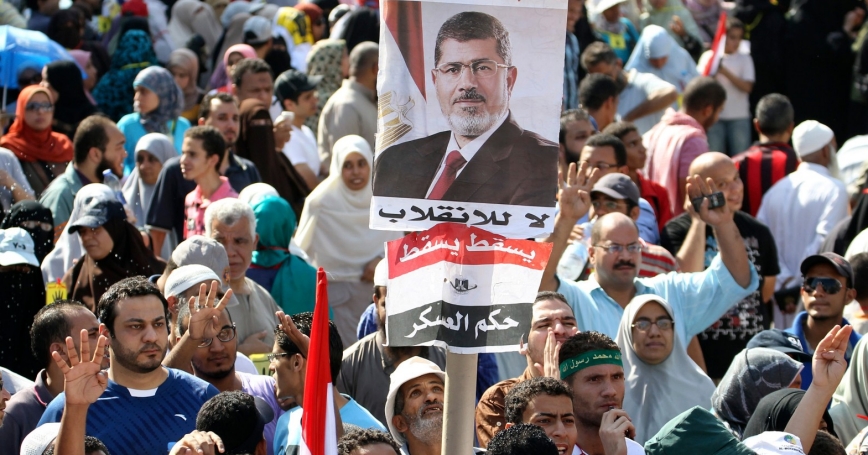 Supporters of the Muslim Brotherhood and ousted Egyptian President Mursi protest in Cairo on August 23, 2013

Egypt's future trajectory rests not only on the policies of Egypt's current military leaders, but also on the strategy adopted by the Muslim Brotherhood. Even before the army cleared protesters from their strongholds in the streets of Cairo and began arresting those Brotherhood leaders who were still at large, there were reports of generational divisions in the organization.

Some brothers remained committed to confrontation, accepting that such a course might lead to the party being outlawed and forced underground, as it was for decades before the overthrow of President Hosni Mubarak. Many of the brothers spent years operating in the underground and now feel comfortable there.

Others believe the Brotherhood should stay in the political game, adopting the role of loyal opposition. The Brotherhood would remain a minority party, but it could continue to hold offices, provide social assistance that the government does not and demonstrate its continuing strength at the polls. Circumstances might change, providing an opportunity for the Brotherhood to eventually shed its minority status and return to power.

While army leader General Abdul Fattah al-Sisi has recently said “there is room for everyone in Egypt,” the continuing repression of the Muslim Brotherhood dims any expectations of reconciliation in the near term. Instead, members of the Brotherhood are being portrayed as terrorists, and many secular Egyptians see them this way. Indeed, some analysts see the repression as a deliberate effort to push the Brotherhood toward violence, thereby justifying the crackdown.

Although toppled from power and swept from the streets, its leaders under arrest or on the run, the Brotherhood still has considerable power. Estimates of its membership run between 600,000 and 1 million. It commands the allegiance of perhaps 20 percent of the population, many of whom look to it for social assistance that the state does not provide. And it has demonstrated its ability to field fervent supporters who are ready to die

What then are the Brotherhood's strategic options?

The Muslim Brotherhood could dive back underground. The organization has experience operating in secrecy, while still providing social services, building party membership and cultivating foreign ties.

The Muslim Brotherhood could opt for continued street confrontations. These create martyrs, which may further energize the party's base. Harsh government responses to provocative acts by the Brotherhood can arouse sympathy for their cause, prompt international condemnations and harm the Egyptian economy — especially tourism, the industry the government most relies on to provide jobs. This is a two-edged sword as it risks antagonizing Egyptians who will hold the Brotherhood responsible for the turmoil and its costs.

Continued confrontations are radicalizing experiences. Not ready to be martyrs, brothers will want to fight back. Street fighting is an unequal contest. The next phase will be terrorist attacks. The Brotherhood lacks guns and probably wants to avoid living down to a terrorist label. And once the violence starts leaders may not be able to rein in a more violent fringe.

The Muslim Brotherhood will not seek an alliance with violent jihadists like al-Qaida. But al-Qaida can probably smell recruiting opportunities among disillusioned brothers. If it fails to aggressively oppose the new Egyptian government, the Brotherhood could find its own membership eroding to the extremists. Egyptian terrorist leaders like Ayman al-Zawahiri, currently the leader of al-Qaida, and the so-called “Blind Sheikh,” Omar Abdul-Rahman, currently in a U.S. prison for his role in planning terrorist attacks, emerged from crackdowns on Islamist groups following the 1981 assassination of Egyptian President Anwar Sadat.

What could emerge is an informal alliance of radical renegades from the Muslim Brotherhood, veterans of the old Islamist terrorist groups from the 1990s, al-Qaida elements looking to exploit the turmoil, and radicalized Bedouins in the Sinai Peninsula.

A terrorist campaign, however, even if the Brotherhood was not organizationally responsible, could provoke even harsher repression as history has shown. In 1980, amidst a breakdown in authority and growing terrorism, the Turkish army overthrew the government. In the following three years of military rule, a half million people were reportedly imprisoned, and hundreds died in jail. In 1992, to prevent Islamists who had won the election from taking power, the Algerian army seized power. As many as 150,000 people reportedly were killed in the subsequent civil war, which left the nation traumatized. No one envisions that bloody trajectory for Egypt where the army regards its role as that of political referee, not ruler, but terrorist violence can bring unexpected results.

It is not clear yet which path Egypt's Muslim Brotherhood will take. In the meantime, more violence and more repression are likely.

This commentary originally appeared on U.S. News & World Report on August 26, 2013. Commentary gives RAND researchers a platform to convey insights based on their professional expertise and often on their peer-reviewed research and analysis.