Will Iran's Opposition Leaders Be Released? 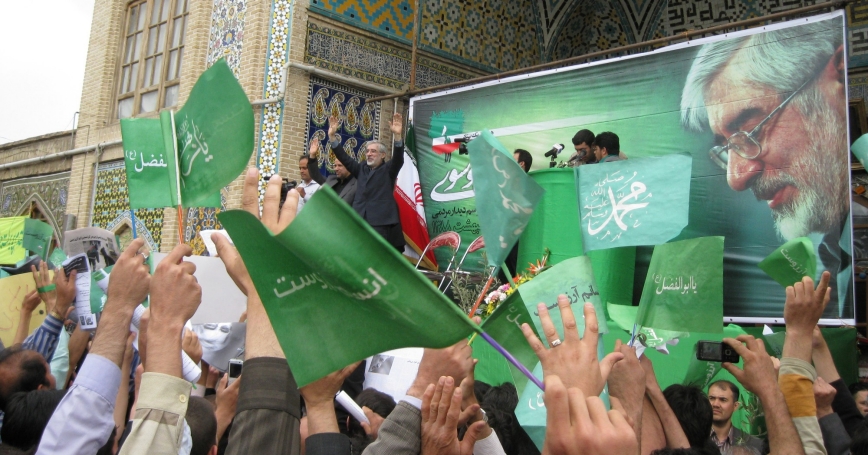 A 2009 rally in support of former Iran prime minister Mir Hussein Mousavi before he was put on house arrest.

Hassan Rouhani's election as Iran's new president has garnered much international attention. In particular, Rouhani's ascendance has raised hopes of a diplomatic breakthrough on the Iranian nuclear crisis.

It would not be surprising for Rouhani to try and find a way out of Iran's crisis: the enormous damage to the Iranian economy through sanctions is an existential threat to the Islamic Republic.

But often forgotten in the West is the Iranian regime's other major source of instability: the deep splits caused by the 2009 presidential election and subsequent arrest of three influential reformist leaders, Mehdi Karroubi, Mir Hussein Mousavi, and his wife Zahra Rahnavard.

Rouhani's campaign focused not only on improving Iran's economic condition, but also on lessening the “securitised” atmosphere in Iran, and gaining the release of Karroubi, Mousavi, and Rahnavard. Tehran has been swirling with rumours of their imminent release.

From Supreme Leader Ayatollah Ali Khamenei's perspective, the conditional release of Mousavi and Karroubi could begin to heal the regime's self-inflicted wounds. However, freeing a group labeled as the “sedition” by the regime could also be very risky; it could be viewed as an admission of error by Khamenei and intensify the factional battles within the system.

Iran's warring political elite have the capability and willingness to sink nuclear negotiations. The resolution of the nuclear crisis does not only depend on U.S.-Iranian relations, but also on other factors including the fate of three Iranian prisoners.

During his campaign, Rouhani appealed to three different constituencies: the ruling conservatives, the reformists, and ordinary Iranian people. A calculating and clever politician, Rouhani managed to win the election without upsetting the delicate political balance in Iran.

Rouhani is a conservative regime supporter, although of a different cut than President Mahmoud Ahmadinejad. He believes in Iran's system of religious rule, but does not believe in “exporting” the revolution. For him, the Islamic Republic should strengthen itself at home before engaging in foreign adventures.

Javad Zarif, Rouhani's reported pick for the post of foreign minister, is quite telling in this regard. Zarif, a polished diplomat, helped the United States establish Afghanistan's post-Taliban government in 2002. He would likely attempt to repair Iran's relations with the outside world, perhaps including the United States.

Rouhani's dedication to the reforms espoused by Mousavi, Karroub, and Rahnavard is uncertain. Yes, he would like to decrease repression in Iran and make the people more “prosperous”. But this does not translate into a belief in fundamental reforms.

Most likely, Rouhani would like to see a re-emergence of pre-2009 Iran, in which the left and conservative wings of the Islamic Republic co-existed and worked together in maintaining the revolutionary theocracy.

The influential daily newspaper Kayhan, long viewed as the mouthpiece of Iran's conservative establishment, has been particularly vociferous in its denunciation of the reformists, and not so subtle in its warnings to Rouhani. Other conservatives, such as Judiciary Chief Sadegh Larijani, have also warned of reformist “cobras raising their heads again”.

It appears that Rouhani's cabinet will mostly include technocratic and moderate conservatives. Influential reformists such as Khatami will likely play a behind the scenes role in advising Rouhani. But what of Mousavi, Rahnavard, and Karroubi?

The husband and wife remain under arrest in their own residence. Reports from Iran indicate that their harsh imprisonment (almost no contact with the outside world) has resulted in serious health issues for them.

Mehdi Karroubi, who is reported to be under arrest at a Ministry of Intelligence safe house, is also reported to be suffering from various ailments. The death of any of them could be a serious blow to the political balance in Iran and Rouhani's reputation. He has promised to gain their release. Will his government act accordingly?

Rouhani does not command the Islamic Revolutionary Guards Corps; it is likely that the Guards and their chief Khamanei will play the most important role in determining the fates of Mousavi, Karroubi, and Rahnavard. Thus far, the trio has been held in detention without going to trial.

Interestingly, the Guards-linked website Basirat has declared that “If the law is followed, a competent court must look into the crimes of these individuals.” This is one of the few times that the regime has spoken so openly of trying the reformist trio; it fears a trial would give them an opportunity to publicly challenge Khamenei.

However, the establishment has also indicated that it would forgive the reformists if they repented for their “sins”. Could the regime be considering trying the three opposition leaders? This in itself would not be an admission of defeat, but could pave the way for a compromise between the left and the right. As Khamenei has repeatedly stated, national unity is essential for dealing with Iran's external enemies. And as Khatami has said, the Iranian “people” could forgive the regime if it forgives the 2009 protestors, and by implication the reformists.

Rouhani, Iran's bridge-maker, could theoretically lay the groundwork for national unity as he attempts to negotiate the nuclear programme. But the bridge he stands on is shaky. It will take much effort by him and his supporters to guide the regime toward stability.

Progress on nuclear negotiations and the lifting of sanctions could help. The most recent U.S. Congressional sanctions against Iran will make Rouhani's job only harder, and empower the ultra-conservatives. And any domestic and foreign moves viewed as threatening by ultra-conservatives could imperil Rouhani's presidency. This would not only result in renewed regime infighting, but the collapse of nuclear negotiations.

Regarding negotiations, it is often said that it takes two to tango — the United States and Iran. But in reality, Rouhani's dance will have many participants, some of whom are more self-interested and treacherous than others. Rouhani's cabinet selection will be a major indicator of his intentions.

The fate of the long-suffering Karroubi, Mousavi, and Rahnavard could be the most important indicator of all.

This commentary originally appeared on Inter Press Service on August 2, 2013. Commentary gives RAND researchers a platform to convey insights based on their professional expertise and often on their peer-reviewed research and analysis.