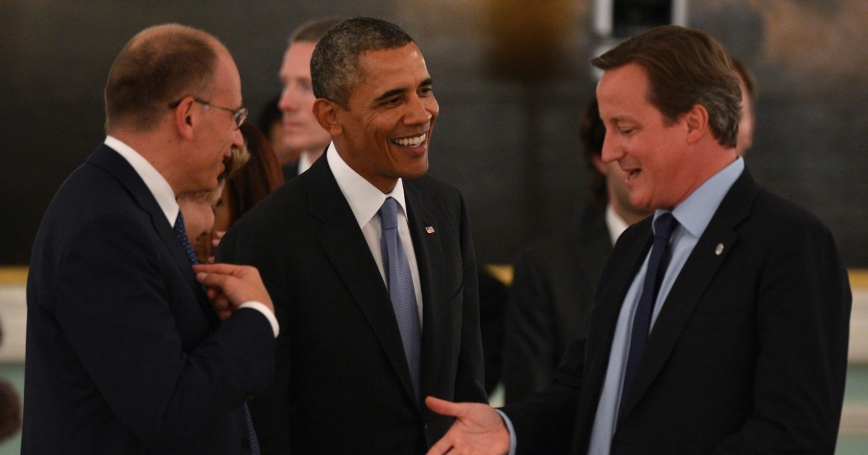 For the last five decades one of the core pillars of the Atlantic alliance has been the close defense and intelligence cooperation between the United States and Great Britain. This cooperation, forged during World War II, has given the U.S.-British relationship its special character. No other ally enjoys such a relationship with the United States.

The August 29 vote in the House of Commons against Britain's participation in a military strike against Syria, therefore, left officials in London and Washington wondering whether this heralded special relationship had been diminished. By contrast, France, hardly an unquestioning backer of U.S. policy initiatives, firmly sided with Obama, supporting military intervention, even without a United Nations mandate.

Does this mean that France is likely to replace Britain as America's staunchest ally? Hardly.

France has a number of reasons for favoring military action in Syria. As a former colonial power, France considers Syria part of its sphere of influence. For years it has smarted as Syrian President Bashar Assad has sought to keep Lebanon, another former French colony, under its yoke. As Fawaz Gerges, a leading expert on the Middle East has put it, now it's payback time for the French.

Paris is not afraid to wield military power in defense of French national interests, as its muscular approach to the recent crises in Libya and Mali underscores. Neither is it timid about staking out positions that are at odds with U.S. policy. Thus its firm stance on the Syrian crisis is in keeping with a long French tradition and has strong popular support.

President Francois Hollande also has much greater freedom of action and latitude in foreign policy, which under the French constitution is the prerogative of the president. Unlike in Britain, the French system does not require the president to consult parliament before committing troops to combat abroad. He simply has to inform parliament of the decision to intervene within three days of intervention.

Obama's decision to ask Congress for approval for a strike has left Hollande in an awkward position. Having quickly agreed to join in military action, France has now been forced to cool its heels on the sidelines while diplomatic avenues are explored and Congress considers whether to support a military strike. This has weakened Hollande's ability to project the image of a strong, independent leader and opened him to wide domestic criticism.

For British Prime Minister David Cameron, the House of Commons vote was a self-inflicted wound. Cameron sought to stiffen Obama's resolve just as Margaret Thatcher had urged President George H.W. Bush not to “go wobbly” after Saddam Hussein invaded Kuwait. But while he was busy trying to hold Obama's feet to the fire, Cameron failed to rally his political troops and underestimated the strength of the opposition within his own party.

However, while the House of Commons vote was largely attributable to short-term miscalculations on Cameron's part, it also reflects important long-term trends that could complicate U.S.-British ties and weaken the traditionally strong bonds between the two countries.

There has been a visible shift in the public mood over the past decade in Britain, including within the Conservative party. Conservative members of Parliament are calling for Britain to play a more modest role in world affairs and are less willing to follow the American lead than in the past. Memories of the Iraq War played an important role in fostering this mood. Tony Blair's decision to support George W. Bush was highly unpopular with the British public and has diminished support for U.S. policy.

At the same time, the austerity measures introduced by the Cameron government have resulted in deep cuts in funding for the British armed forces. These cuts threaten to limit the ability of British forces to participate in future military operations with U.S. forces. Many British officers complain that Cameron wants a robust military, but does not want to pay for it.

It is too soon, however, to conclude that this emphasis on a more modest British role will last. As Gideon Rachman recently noted in the Financial Times, the special relationship has tended to go through cycles. Over the years, policy differences have failed to diminish the special relationship. Britain stayed out of the Vietnam War, for example, but then pursued close ties to the United States during the Thatcher and Blair years.

Still, the vote has raised questions about Britain's role in the world and is likely to have an impact on other European allies. Emboldened by Britain's action, other allies may feel less inhibited about expressing their own doubts about a military strike against Syria.

The impact was particularly visible in Germany. Before the House of Commons vote, German officials suggested that Assad's use of chemical weapons should not go unpunished and seemed ready to support strong action against Syria. After the vote, German government spokesmen stated that Germany would not participate in a military intervention against Syria.

The British vote could affect the preparations for the December European Council discussion on European security and defense policy. The U.K. has been a staunch advocate of increased European defense capabilities, such as strategic airlift, which would enable European countries to play a more active part in expeditionary operations. But as Ian Bond, director of foreign policy studies at the London-based Center for European Reform, has noted, if reluctant partners believe that the U.K. itself is losing the political will to undertake such operations, they are unlikely to respond to British pressure to spend more on such capabilities.

In short, the vote in the House of Commons on August 29 may represent an aberration attributable mainly to poor party management by Cameron. But the deeper, long-term trends in British policy that influenced the vote — general war weariness, discontent with U.S. policy and leadership in Iraq and strong fiscal pressures for cuts in defense spending — should not be casually dismissed. They are likely to manifest themselves more strongly in the coming decade and could pose a challenge to the vitality of the U.S.-British special relationship.

F. Stephen Larrabee holds the distinguished chair in European security at the nonprofit, nonpartisan, RAND Corporation and served on the National Security Council staff in the Carter administration.

This commentary originally appeared on U.S. News & World Report on September 11, 2013. Commentary gives RAND researchers a platform to convey insights based on their professional expertise and often on their peer-reviewed research and analysis.